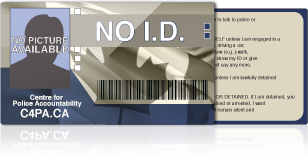 The following was shared via CopBlock.org’s submit tab by Kaycee.

Here is my tragic story of police dishonesty and corruption at its finest. Almost five months ago I was walking down the road about two minutes away from my house. At around 3 PM two police cars boxed me in and the officers approached me. One of the officers did all the talking; he asked for my name and the other started searching me. I am a female who is seventeen years old, so a female officer clearly had to search me. I said that I felt I didn’t need to give my name because I hadn’t done anything wrong. They insisted I had to give them my name but wouldn’t give me a valid reason as to why, it was simply because, “they said so.” I refused calmly and said I didn’t consent to their prima facie code of law and that I would like to continue walking unencumbered. The male officer said to put my hands behind my back and put me in handcuffs, then took me to the police station downtown. As soon as I stepped out of the back seat of the police vehicle, the male officer reached his hand into my back pocket and took my phone from me. I asked multiple times if I was under arrest, but they wouldn’t tell me anything. They shackled me with the leg restraints and handcuffed me twice to a bench. I kept asking many of the officers what was going on. After about seven hours of sitting there, the handcuffs on my hands were hurting quite badly, so I moved my hand to help relieve some of the pain. The female officer came from one of the desks and walked up to me; she didn’t say anything, just tightened the handcuffs. They were already so tight to begin with that when she tightened them even more, within minutes, both of my hands were turning purple.

That’s when I started getting upset and I yelled that I was going to sue them if they didn’t loosen them. Another officer came over and loosened them after quite some time of my hands being purple. I still didn’t even know what was going on; one officer would tell me I was going to jail , another would tell me I was leaving soon. They kept me in a holding cell for two and a half days. When morning on the second day came, I had to go see the judge upstairs. He started yelling at me telling me how disrespectful I was for not giving a police officer my name and that I was out of control and so horrible. This was my first time ever being involved with the police, though I do know the law pretty well. He said I was facing a misdemeanor because in the police report the officer said he was “looking for a runaway,” which he never stated to me when asking for my name. The charge I am facing is obstruction of governmental administration of section 195.05 of the penal code of New York state, in the second degree. He said he could send me to jail for 6 months to a year but instead would give me probation. He gave me probation with a 9 O’clock curfew and stated that if I had any police contact I would be in jail.

I had a court date for the next month, which is when my probation was supposed to be over since it was such a simple “crime.” Not too long after, I was walking again down a different road around noon when yet again I was approached by two different cop cars and boxed in, along with two of my other female friends. One cop was silent while the other immediately started harassing us with questions like, “Where’s the dope at? Where’s the dope at?” He searched my friend’s bag and made us empty our pockets. He claimed he could because he apparently “smelled weed.” We were walking right next to a place called “Magic City,” near the hood part of town, where a lot of the fiends hang near. I said I wanted to call my lawyer but he said that I was not allowed.

Although he didn’t find anything, he wouldn’t let us leave. He then took me to the side and started questioning me alone. He started calling my friends “niggers” and other very rude and harsh remarks. He kept stating that I would go to jail if I didn’t tell him where the “dope” was. I said we had none and I asked if we were being detained. He didn’t answer me, so I repeatedly asked him. He seemed to be getting flustered and told me to sit in the back of his cop car. I didn’t want trouble, so I complied with what he said. When I was back there, I called my lawyer and my parents. A few minutes later my friend’s parents showed up because they could see from down the block that we were being held there. This was right near a lot of violent areas, so a crowd of people were coming and the two police officers called for backup. My friend’s parents started yelling at them, telling them they were harassing us because this isn’t the first time they said those kinds of things to my friends. I did record it on video also but I was told if I didn’t delete it then I would be arrested. I just decided to delete it because I didn’t want issues again.

The next day I went to the police station and filed a harassment claim against the officer. When I went to court the first time the judge denied my release from probation and said to come back the next month. Within that time I had to go to court again because the judge “wanted to see me.” I’ve been to court so many times in the past five months, and it was ridiculous. Every time I went he would tell me maybe next time he would take me off probation if I was “good.” My probation officer was a real jerk, might I add. The judge tried to send me to jail for missing a day of school when I was sick also, but I hired a very good lawyer and the judge could not send me. After five months of probation, the judge finally took me off.

I have a lot of family issues and decided getting my GED would be easier so I have started working on that. I got a call from a lawyer or DA, I don’t even know who he was, but he said the judge was looking for me and that he wanted to drug test me. He was trying to send me to jail for not being in school. I told him he can want to do whatever but the law states he can’t, and even if he did drug test me and I was positive for weed there’s nothing he could do because its not illegal to have it in your system – it’s possession that counts, and even with that I think here it’s anything less than 16 grams is decriminalized anyway and only a fine.

The very next day I was outside at a creek/woods hanging out when I saw my old probation officer. He told me the judge was looking for me, lecturing me about how I need to go to school, almost yelling at me. He stated that the judge again wanted to drug test me, so I decided to get smart and tell him to tell the judge I wanted to drug test him also. The probation officer just walked away with not to much to say after that. I was told that the judge was trying to have the school have me arrested and that the judge would then put me in jail and raise my bail so high I wouldn’t be released for quite some time. Also, Christmas is coming up so they said I wouldn’t see trial for months because court isn’t until after the new year. I’m not worried that I’m going to be arrested because I have spoken to my school and they are completely against having me arrested. I’m just sick of being harassed by the law for no reason. Thanks for reading my story and hopefully you guys can comment back with advice for me or just your own opinions on this situation.