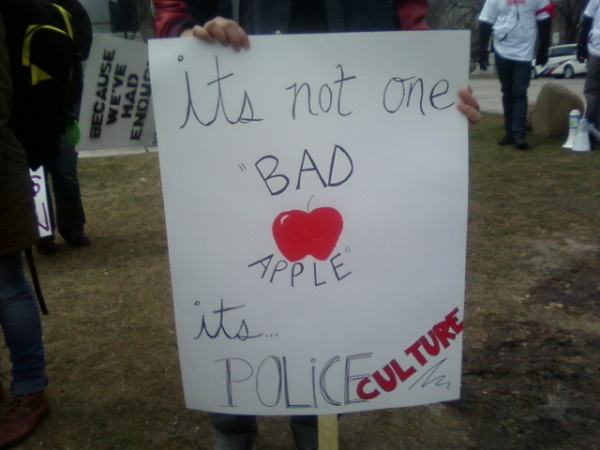 While police certainly like to fear-monger and wallow in self-pity about a completely fictitious “War on Cops,” and an alleged rise in police deaths, the reality is that police officers don’t even make the top 10 list of America’s most dangerous jobs (see more on the falsity of increasing police deaths in Paula’s article here). Not only are their jobs less dangerous than that of construction workers, loggers, sales people who drive, and machinery installers, their death rates could arguably be drastically reduced if only they would take ingenious new-fangled precautions such as wearing seatbelts. In recent years, car crashes killed more police officers than violence, and studies indicated up to 40 percent of officers killed in car accidents were not wearing seatbelts (Paula’s article). While they are busy being reckless, killing themselves and pinning it on the public, the public continues to cheer them on in their hard work and exemplary service.

No one thinks the difficulty of fishing, construction work or salesmanship should grant free passes for torture and murder, but for some reason, far too many Americans believe police should be excused for abuses and executions because the job is so damn hard. When Johannes Mehserle “accidentally” killed Oscar Grant (and I say it in quotes, because in my opinion that was fucking murder), many police supporters believed he should receive no punishment at all. In most cases, ordinary people who accidentally kill others are certainly made to suffer some kind of official punishment, even if it was largely unintentionally. To my knowledge, construction workers and roofers, who provide people with homes, do not get to evade responsibility when their negligence causes someone’s death.

Absurdly, people continue to insist cops are somehow different. For once, I can agree with them, in one sense. I can actually say that there is one thing that is particularly and uniquely difficult about being a cop that simply is not the case with any of the other “difficult” professions listed above. For cops, it is inordinately, extremely, and unimaginably hard to get fired, no matter how incompetent you are.

The Houston Chronicle recently reported that ten Houston Police Department officers have had 370 violations of regulations over their careers. The complaints ranged from minor to serious, including failing to investigate a suspected child rape, wrecking police and private cars, refusing to answer internal affairs investigators, and detaining innocent residents. Nine of the ten officers continue to be on duty. One of these officers has 47 complaints sustained against him, while another has racked up 44. One officer was late to his shift 40 times. According to the Houston Chronicle, “four had conduct and a history of complaints severe enough for the police chief to attempt to fire them, but they were able to keep their jobs because of civil service and police union provisions that allow the chief to negotiate a lesser punishment through a ‘last chance agreement.'”

This is coming from the group of people who constantly tell the public that if they had only obeyed orders, they wouldn’t have been shot. If they had only complied, they wouldn’t have been Tasered, because the law is the law! They can’t even obey their own rules, laws or orders, but somehow, they are continually successful in using those same rules, laws and orders to justify the onslaught of abuse they consistently mete out to the public.

Even if officers are fired, “independent” hearing examiners often overturn firings upon appeal. This was the case with four of eight officers Houston’s Police Chief Charles McClelland fired last year. In Oakland, California, a similar thing happened with Marysol Domenici, an officer who was present during the execution of Oscar Grant. She not only justified the killing by saying that if only people would obey orders, they wouldn’t be killed, she also likely committed perjury (read more in Dr. Q’s article here). After she was fired, she was suspended with pay at her regular salary of $95,000, essentially, a paid vacation. She did absolutely nothing for 15 months while receiving a total of $118,750 in wages, paid for with local taxes. She too was reinstated by an arbitrator (with police like her, I would rather her be paid to do nothing, instead of cheering on executions).

In sum, it is important for people to understand the insurmountable, unparalleled difficulties [in getting fired] that police must face daily. You can be late 40 times, utterly fail in your duties, wantonly kill people, destroy private and public property, and still keep your job. Even if you lose your job, you will likely get it back after public outrage has died down. In the words of Arnold Schwarzenegger, police need to stop whining.