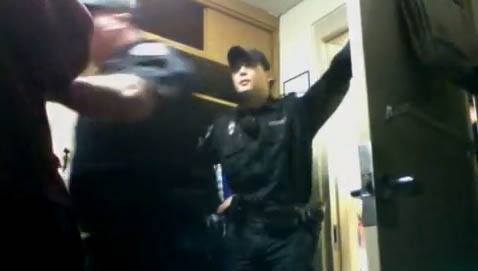 The following, originally posted at CampusReform, was submitted by Chuck Slauson.

The University of Kentucky – Lexington (UKL) Police Department says it is reviewing the conduct of two of its officers after they appeared in a viral YouTube video threatening a student with expulsion while forcing their way into his dorm room on Saturday.

Official university policy, obtained by Campus Reform on Tuesday, states that police officers may not search a student’s dorm room without permission.

The video, which passed 150,000 views on YouTube on Tuesday, is entitled “I hate cops,” and seems to show a student setting up a video camera before berating two campus police officers while refusing them entry into his room.

The officers, who alleged alcohol had been dumped from the dorm room’s window, demanded to search the premises for more alcohol but did not appear to possess a warrant.

Instead, one officer invoked “administrative rights” to enter the room and threatened the student with expulsion for declining to permit entry.

“Listen man, do you want to be kicked out of this university?” he asked.  “I can pave that road.”

“We’re going to get you kicked out,” he added.

After the student demanded an explanation, the officer appeared to say “we don’t have to explain anything to you son.”

The officers did not appear to gain consent from the student before finally shoving past him and conducting a cursory search of the premises without turning up any alcohol.

The same officer who threatened expulsion can then be heard remarking that there “is no Fourth Amendment” after opening the student’s refrigerator.

The officer was likely referring to the Fourth Amendment in the Bill of Rights section of the Constitution which guarantees against “against unreasonable searches.”

The university’s official residence policy, available online, does allow administers and police to enter student’s dorm rooms for a variety of reasons but seems to bar warrantless searches.

UKL’s police department did not provide a spokesperson to Campus Reform for comment, despite multiple requests and would not reveal whether or not the two officers are still on active duty.

According to a legal guide published by Princeton University, students have the same Fourth amendment protections living on campus as they do off campus. However, the guide notes that some student housing agreements may provide some exceptions.

The video, was published Monday by a user calling himself “Peter Dimples.”