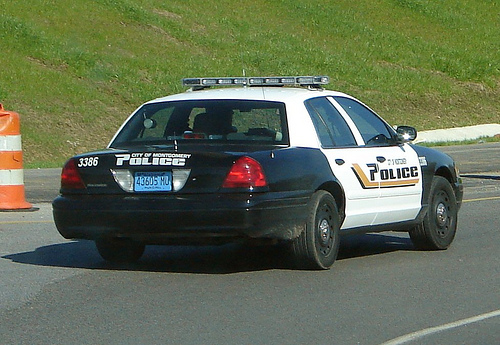 The following was submitted to CopBlock.org by Rick Boone.

I am very upset that I was stopped at 1 AM Friday, November 30,2012, after working 9 hours at Baptist hospital. I had just pulled out on to E. South Blvd when the officer , I believe his name was A.J West, at the substation pulled me over for failure to dim. I explained to him that I had been working at the hospital helping them with their benefits but he did not want to hear it. He was very flippant and rude. I live in Arkansas and am here on business. It seems to me he could have just given me a warning knowing that I don’t live here.

He also spelled my name wrong on the ticket that took him 22 minutes to write. The fine is $165 which I think is ridiculous. There was no one coming from the opposite direction and no harm done. I think he just wanted to write a ticket and did it because I’m from out of town. I am just upset at his attitude. He really didn’t say much but what he did say was inappropriate considering the circumstances. I am looking for ways to fight this ticket and I am exploring all options.

I have contacted several agencies and numerous internet sites including facebook and left complaints on the city of Montgomery and how I think they are running a criminal revenue scam. I doubt anything will be done but I just want everyone to know just how greedy and revenue hungry this bunch really is. I am going to let everyone know about it through whatever avenues I have available. Someone could have been involved in a serious crime just blocks away while this minion was busy raising revenue to meet his quota.

I am surprised they don’t put me under the jail for such a heinous offense as having my bright lights on. If you are visiting Montgomery be very careful when driving and always be on the lookout for the crooks patrolling the streets. Don’t be a victim of their schemes! Red light cameras, bogus citations and enforcement of stupid , meaningless and archaic laws.