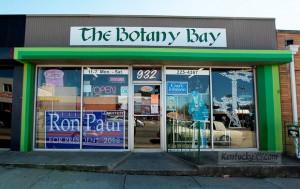 Sally Oh writes, “Thank you for this opportunity! We’ve written about this raid at http://DecriminalizeKY.blogspot.com.”

Here are the first few paragraphs of the initial post describing the crime:

I’d Like to Report a Crime: Predatory Law Enforcement Actions in Lexington, Kentucky

Sunday 9/9/12: I witnessed an armed robbery in broad daylight. The thieves were bold, armed, wore no masks, didn’t hurry. They weren’t afraid of being caught. Although, it turned out they sure didn’t want anyone watching.

The Herald-Leader reported this robbery. They got a couple of facts wrong, starting with calling the looting of a retail store an “enforcement action.” To the handful of us recording the siege, it was hard to distinguish this “enforcement action” from a 7/11 smash and grab.

I arrived just after nine grown men had swarmed into the Botany Bay on Winchester Road. After they handcuffed the four young unarmed employees, aged 18 to 24, the looting began.

Much of it is on video shot through the front window. The entire raid would have been recorded except that the first thing the vandals did was rip out the security cameras. (They also stole the modem and router. Why? Did they feel compelled to further punish the tax-paying law-abiding business owner? They appeared to be all in for that enforcement action.)