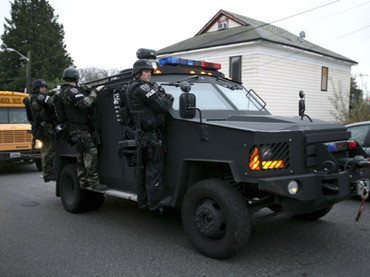 The following article, submitted by Matthew Dolloff, was originally posted at RT.com.

Would police officers in your area having the “guilty until proved innocent” mindset make you feel safer? Is a militarized police force in a small town of 25,000 really the most effective way to prevent real crimes – ie, ones with victims? -Kate

There isn’t a lot to do in Paragould, Arkansas, but residents of the town of barely 25,000 seem to have no problem finding trouble. Now in order to curb the rising crime rate, the city is proposing heavily armed police patrol the streets on foot.

At a town hall meeting on Thursday, Mayor Mike Gaskill and Police Chief Todd Stovall endorsed a plan to send cops dressed in full-fledged SWAT gear and equipped with AR-15s into downtown Paragould starting in 2013.

The militarized police force will be tasked with trying to control a crime rate that has made Paragould an increasingly dangerous place to live in recent years. According to statistics collected by city-data.com, Paragould has had a property crime index rating more than double the national average since 2007. Rapes, burglaries, thefts and assaults per capita are also well above the mean there, statistically suggesting Paragould is perhaps the least-safe among area cities.

“This fear is what’s given us the reason to do this. Once I have stats and people saying they’re scared, we can do this,” Stovall said, according to the Paragould Daily Press. “It allows us to do what we’re fixing to do.”

In order to bring crime down, residents of Paragould may soon have to endure police officers brandishing semi-automatic assault riddles on the regular. What’s more, Stovall says, is he intends to have the cops collecting identification from everyone and anyone in an attempt to discourage criminal activity.

“To ask you for your ID, I have to have a reason,” he said. “Well, I’ve got statistical reasons that say I’ve got a lot of crime right now, which gives me probable cause to ask what you’re doing out. Then when I add that people are scared…then that gives us even more [reason] to ask why are you here and what are you doing in this area.”

“They may not be doing anything but walking their dog,” added Mayor Gaskill, “but they’re going to have to prove it.”

Soon after the Paragould Daily Press picked up the story, news of the small town’s efforts to enforce martial law began making headlines outside of Arkansas. On Sunday, Stovall authored an explanation on the Paragould Police Department website to clarify how exactly the proposed Street Crimes Unit will interact with citizens.

“Most often, this identification process will be nothing more than making contact with a subject, handing them a business card, and asking if they live in the area and if there’s anything we can do for them,” he says. During hours in which crime seems to be more prevalent, however, Chief Stovall says their process “will become more stringent.”

“We will be asking for picture identification. We will be ascertaining where the subject lives and what they are doing in the area. We will be keeping a record of those we contact.”

Stovall adds that the program would not violate the constitutional rights of Paragould citizens, claiming, “Once we have an area that shows a high crime rate or a high call volume, it is our duty and obligation to find out why this is occurring and what we can do to prevent the trend from continuing. Therefore, identifying subjects in those problem areas help us to solve crimes, and hopefully to prevent future crimes.”

Update: The town hall meetings were cancelled, “in the interest of public safety.” The claim is that with people who feel strongly on either side of the issue, a safe and productive meeting would not be the probable outcome.