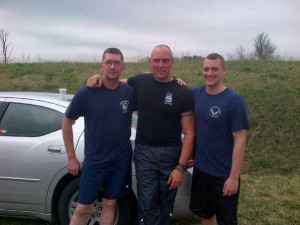 Written and submitted by Lawrence Smith, the following was originally posted the West Virginia Record on December 14, 2012.

MARTINSBURG – As one civil rights suit against him begins, another against a Morgan County deputy sheriff may soon come to an end.

Last month, Seth A. Place was named as a co-defendant in a lawsuit filed by Berkeley Springs resident Eileen Markous and her son Matthew. In the suit, Eileen alleged Place and fellow deputy Richard J. Haynes falsely arrested her on a charge of battery of a police officer when she went to MCSD’s office on Dec. 3, 2010, to ask Place why he cited Matthew for a loud muffler.

According to court records, the Morgan County Prosecutor’s Office on Sept. 11 dismissed the charge after a jury two weeks earlier acquitted Matthew on charges of battery of and obstructing a police officer. Matthew was arrested the same day when he questioned Place and Haynes why they arrested Eileen.

In their suit, the Markouses say theirs is not the first arrest Place made that led to a civil rights lawsuit. Two months before falsely arresting them, the Markouses point to Place shooting an unarmed man through the front door of his home.

According to his suit filed last year, Ulysses J. Everett, Jr. says Place arrived at his Fairview Drive home in Berkeley Springs on Oct. 6, 2010, responding to a domestic disturbance call. Prior to his arrival, 911 dispatchers informed Place that Everett’s wife Diana safely departed for a relative’s home “several miles away.”

Upon arrival, Everett says Place approached his home with a handgun in his right hand and a police dog in tow in his left. After Place identified himself as a deputy sheriff and shouted “let me see your hands,” Everett says he first opened the door only to close if after seeing the dog charge him.

According to the suit, Place then kicked the door in an effort to enter the home. After making a second unsuccessful effort to kick open door, Place then fired two shots with his handgun.