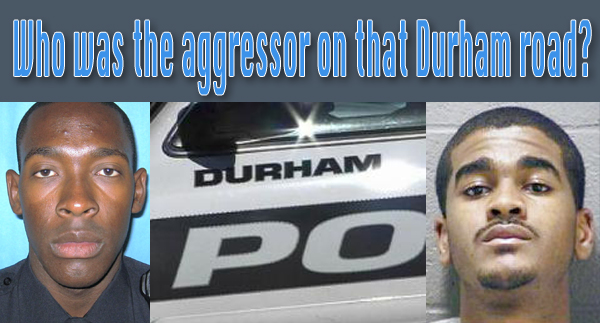 Carlos Riley was driving when he pulled over, after being tailed by a suspicious, unmarked car. Out of that car sprung Kelly Stewart, who began shouting expletives, eventually causing such a hostile situation that Stewart pulled a handgun with the intention of mortally wounding Riley.

But – perhaps due to the stress of the moment – when Stewart pulled his gun he accidentally shot himself in the leg. Riley, seeing a chance to get away from the hostile situation, left the scene. But not before he disarmed Stewart. And took his Durham PD badge.

At least that’s the recount of events Riley has communicated, through his lawyer, John Fitzpatrik.

Read the below for more insight – though keep in mind most mainstream outlets tend to side with those who claim to be “authorities.”

Ask yourself, might the Durham PD have handled this exchange differently if one of the parties didn’t wear a badge? Would they have employed the use of “a heavily armed Strategic Enforcement Team” to evacuate two buildings?

We’ll definitely be keeping an eye on this situation as it develops – hopefully with some insight from those closer to the situation.

On a related note – check out InnocentDown.org, which documents the innocent people killed by law enforcement and to remember those innocent victims of police violence.

From Boots, the cousin of Riley:

My 21 year-old cousin, Carlos Riley, Jr, was stopped by a cop in Durham, NC the other night.

During the stop, the cop shouted expletives, physically attacked Carlos, verbally threatened to kill him and attempted to draw his weapon to shoot at my cousin.

While attempting to draw his weapon, the cop shot himself in the leg. This is actually a common occurrence for police while drawing their weapons.

Fearing for his life, Carlos fled the scene in his car. According to the police, at this point he also took the cop’s weapon and badge away from him (If this happened, it was a smart move to make sure the cop didn’t shoot him in the back).

After a few hours, and after Durham Police savagely tore through 3 neighborhoods looking for him- at one point using grenades, my cousin called police and turned himself in.

Carlos is now charged with “assault on a law enforcement officer causing serious injury, robbery with a dangerous weapon and possession of a firearm by a convicted felon.” Of course, in a case like this, they would like to throw the book at him to cover up their own oppressive actions.

This is another case of police brutality, with the twist that this time the young man who would have been the victim of police murder got away. My family and I are happy that whatever actions Carlos chose to take that night obviously saved his life.

We’d much rather have a campaign- to clear his name, get him out of jail, and expose police brutality- than one that mourns his death as another victim of murderous police.

In many states, including North Carolina, you have the right to physically resist unlawful arrest. “Each person has the right to resist an unlawful arrest. In such a case, the person attempting the arrest stands in the position of a wrongdoer and may be resisted by the use of force, as in self- defense.” (State v. Mobley, 240 N.C. 476, 83 S.E. 2d 100).

That being said, we need the help of any folks doing social justice work in the Durham area to help us expose this case of a victim of police brutality defending themselves.

by Thomasi McDonald on NewsObserver.com on Dec. 2oth, 2012

An attorney representing the man charged with shooting a Durham police officer on Tuesday says the officer shot himself.

John Fitzpatrick is representing Carlos Antonio Riley Jr. of Durham, who has been charged with assault on a law enforcement officer causing serious injury, robbery with a dangerous weapon and possession of a firearm by a convicted felon.

Police and prosecutors accused Riley, 21, of getting into a fight with Officer Kelly A. Stewart late Tuesday morning when the officer stopped the Nissan 300Z Riley was driving in a parking lot at the Forest Pointe Apartments on Forest Road.

Police said Stewart got into a “struggle” with the motorist and that Stewart was shot in the leg before the suspect drove away.

Stewart was released from the hospital Wednesday night, City Manager Tom Bonfield said Thursday. “He underwent some surgery, but … he is doing better and hopefully on the mend to a speedy recovery,” Bonfield said during a City Council meeting.

Stewart’s service weapon and badge were missing after the incident. Police on Thursday announced that the officer’s badge had been found, but his .45-caliber Smith and Wesson semi-automatic handgun was still missing.

Police also announced that they were searching for two more people who may have been involved in the shooting. Ledarius Devon Riley, 18, of Rosetta Drive and Dustin McCoy Portee, 20, of North Miami Boulevard are both charged with being an accessory after the fact to a felony, said police spokeswoman Kammie Michael.

Fitzpatrick says prosecutors contended in court Wednesday that Riley took Stewart’s badge and gun and then pointed the firearm at the officer. He says he offered a different account of what happened.

“I believe the evidence will show that the gunshot wound was self-inflicted,” Fitzpatrick said.

Fitzpatrick said Stewart was not in uniform and was driving what may have been an unmarked car. He said after Stewart pulled Riley over, he got out of his car shouting expletives at Riley.

“Words were exchanged,” Fitzpatrick said. “The officer initiated the struggle.”

Fitzpatrick said he was not at liberty to say why Riley was stopped by Stewart, who is assigned to the department’s special operations division.

“That’s the million-dollar question,” Fitzpatrick said. “There’s a lot more to it that will come out in open court.”

Michael, the police spokeswoman, declined this week to say why Stewart stopped Riley, or whether the officer had accidentally shot himself, saying the investigation was not complete.

Prosecutors with the Durham County District Attorney’s Office were unavailable for comment Thursday.

The shooting was reported at 10:20 a.m. Tuesday. Investigators found the Nissan a short time later where it had been abandoned in the parking lot of an apartment complex at 1336 New Castle Road. A heavily armed Strategic Enforcement Team was brought in and two nearby apartment buildings were evacuated.

Nearly three hours later, police received information that the suspect was at a home in the 1700 block of Rosetta Drive, nearly four miles away. Police found Riley at the home, and he was arrested without incident.

Riley was convicted in 2011 of felony possession of drugs with intent to sell and deliver. He was sentenced to 24 months probation, state records show.