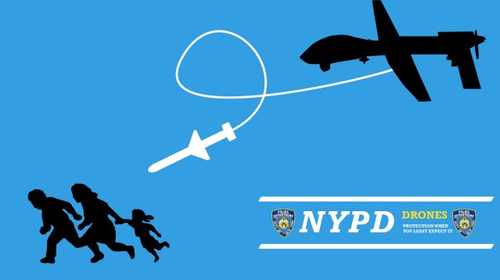 Tonight, when hanging out at the Keene Activity Center, my bud Darryl Perry told me that New Hampshire – where I now live – has a drone base.

A quick Google search by Garret Ean found the write-up below by David Brooks, which was published in The Nashua Telegraph on June 15th, 2012.

In the interest of being unbiased, it’s worth mentioning – as you’ll see if you read the article – it’s claimed that the drones housed in NH are tiny and not militarized.

Is that slight delineation of fact really a big deal (assuming of course, it was true and is still true)?

Anyone thinking can see where the trajectory is heading. Assuming the Statist Quo continues.

How did we reach this point? Where it’s plausible that weaponized aerial tech controlled by some indoctrinated person* sitting in a shipping container out in the southwest desert might push a button and end the life of someone just up the road?

And why is this topic being discussed on Cop Block, which gives as its mission police accountability? Because I don’t believe most folks are happy with the paramilitary nature of policing today**, and because the same perverse incentives are inherent in the warfare state as in the police state.
Much of the growth has happened since 9/11. And now local police departments are getting their own drones.

Let’s apply this to an issue many seem focused on: firearms.

Some people clamor that a big “gun grab” is near. But that wouldn’t be even a consideration if those same folks weren’t first given the authority to regulate guns.

At its root, the real issue is: Why does any uninvolved third party have anything to say about your property?

People boast about having a permit or license to carry concealed, but doesn’t that action – requesting permission to act – denote just who is the slave and who is the master?

When you allow for even a kernel of a double-standard to exist, it will always increase. When you allow a person to steal from you to “protect” you, how do you expect things to go?

That’s why, throughout history, it’s always been the “authorities” responsible for the most death. The most famine, property destruction and environmental degradation. There is simply no accountability. It’s the reason internal investigations can never “fix” the issue police brutality.

The allowance for double-standards – or democide, as coined by R.J. Rummel – brought-about over 250,000,000 deaths last century. Such genocide has occurred due largely to the belief in a bad idea. The police state is based on the same bad idea***.

The proliferation of drones, Bearcats, and prisons is the natural consequence that occurs when a person is granted extra rights.

Do you believe someone, based on their place of occupation or costume worn, has extra rights? I sure don’t. If you don’t, I encourage you to have a conversation about that with those in your sphere.

Ideas have consequences. Think for yourself and encourage others to do the same.

There’s clearly a reality being crafted that many who advocate for peaceful interactions, or just a ‘live and let live’ mindset, aren’t fans of.

Fortunately, the future is not set, and many good folks are working to bring-about one better.

BTW – Essam, the artist who made the NYPD drone image at the top of this post, was kidnapped by men with badges. Is the “free” society you want to perpetuate?

* with the glaring exception of Brandon Bryant
** fortunately more current police employees are thinking for themselves
*** watch my recent video, Want to End Police Brutality? Focus on the Institution

Military says drone aircraft are based at or near Mount Washington
by David Brooks, The Nashua Telegraph June 15, 2012

FRIDAY MORNING UPDATE: Special Operations Command spokesman Ken McGraw says that group “does not have a UAS/UAV base in New Hampshire.” He says Wasp and Raven drones are “Army pieces of equipment,” issued to Army special operations units.

Unmanned drone aircraft have been based on or around Mount Washington by the military, according to presentations given by the Department of Defense and Air Force in 2010 and 2011, but it’s not clear when or why.

“Mt. Washington” is listed as the location for the basing of small unmanned drones in both an April 2010 presentation given by Dyke Weatherington, deputy director of the unmanned warfare section of the Department of Defense, and a June 2011 presentation by Lt. Col. Maggie Howard of the U.S. Air Force Safety Branch.

Both presentations, which are available online, indicate the Mount Washington operation is overseen by Special Operations Command, which oversees worldwide use of special operations elements of the Army, Navy and Air Force.

Mount Washington is the only location in New England where drones were listed as being based.

Both are powered by electric motors and according to publicly released information are used for reconnaissance, carrying cameras or other recording gear. The Raven in particular has had extensive use in Iraq and Afghanistan wars, since it can fly as high as 15,000 feet above sea level at speeds of 30-60 mph.

Neither presentation gives any specifics about the Mount Washington listing, such as location or purpose or how often the drones fly.

The next closest operation is in New Jersey, although several locations in upstate New York were listed in both presentations as future sites for drones.

Calls to the Department of Defense, Air Force and the Special Operations Command were made by The Telegraph, but no more information was available Thursday.

The listings were first made available Wednesday by the group Public Intelligence, a 3-year-old international nonprofit that provides documents, analysis and “open-source intelligence products from the private and public sector,” arguing that it can help “engender a more informed and proactive populace.”

When contacted by The Telegraph, the group said it had no more information about the Mount Washington listing.