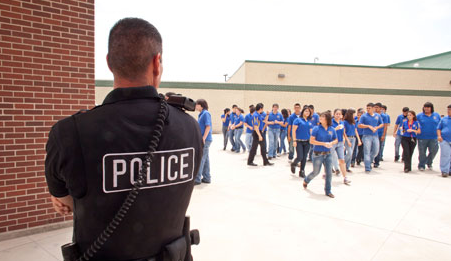 The following story caught my attention because I went to jail for highlighting something similar – police abuse (or interactions) with kids in school. This story comes from Akron, Ohio where it seems a Middle School Police Relations (funny, relations) Officer fractured the arm of a (then) 13 year old girl because she was swearing. According to Ohio.com:

A mother is challenging the school assignment of an Akron police officer accused of fracturing her daughter’s arm while physically restraining the eighth-grade girl.

The incident was recorded on a security camera at Jennings middle school. The video shows Officer Jon Morgan rushing 13-year-old Tamika Williams at a doorway and forcing the student backward across a hall and against a locker.

The officer then grabs the girl’s left arm and spins her around, raising the arm up toward her right shoulder. At one point, the girl appears to be lifted by the officer several inches off the ground while other students mill through the hallway.

Morgan appears to speak into the girl’s ear before escorting her by the arm to an assistant principal’s office. There is no sound to the video.

The student, who has since turned 14, is not charged with resisting arrest or any other crime related to the Oct. 26 incident.

She has since transferred to another Akron middle school. Morgan remains assigned to Jennings while an investigation into the incident enters its third month.

Before I get to the actions of the officer and my rant about the utter silliness going on here. Take a look at the video again and this time watch the other children. What do you see them do? Nothing right? In fact, some stroll on by like nothing is going on. Wake up Parents! You’re raising your children to be obedient slaves who accept violence by some random government agent without question. Fathers, would you want the man (eventually/hopefully) dating your daughter to stand by, doing nothing, while some government agent breaks her arm? Please talk to your kids about doing what’s right, even if just filming the interaction for transparency and accountability.

Now that I got that off my chest let’s talk about having cops in schools! I know with the recent school shootings people are calling for more Cops in schools so let me clarify. I’m all for responsible people having firearms in schools and by responsible I also mean accountable. For example, Officer Morgan – the arm breaker – has continued to work at the Middle School with the internal investigation is completed. Meanwhile, the girl – who had her arm broke – has since transferred to another school. Are you freaking kidding me? This is how the public officials running the police and school departments decided to handle this? This is accountability? They can’t even put the officer on a desk job for a little while but have no problem shipping off the girl who swore.

Who’s a bigger threat, or more likely to use violence, towards the student body? The 13 year who swore or the grown adult who broke her arm for it? Give me a break people! Stand up and speak out. Get these people, who just so happen to be cops, away from your children. The Parents of Jennings Middle School should be pulling Officer Morgan out of the building by his shiny little badge. Maybe the parents would if they weren’t just as scared as their kids are in this video. End the fear, live in peace.

If you (dis)like this story, check out the Manchester Excessive Force post/videos that landed myself in jail for 90 days. Once again proving how backwards the system is. Neither I or this 13 year old girl ever laid our hands on anyone, yet, we were punished. While those who did  harm others walk freely amongst your children. Are you concerned yet?