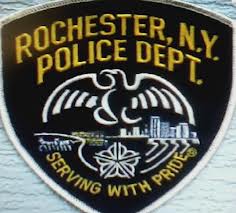 Steven Jodoin-Benus says he must have covered 100 miles over the last couple of days looking for his best friend Codi, a 1 1/2 year old pit bull terrier.

On Monday January 7th, when Steven took his friend home after they had gone ice fishing, Codi got out and wandered off.

Steven barely got any sleep looking for his beloved dog that night.

After posting an ad in the lost and found section of Craigslist, Steven and Ranger, Codi’s brother, searched everywhere near near his Greenleaf Rd. home in Greece, NY.

They looked through fields, streets, a golf club and the Greece, NY animal control.

The next day, Tuesday, with just a few hours of sleep, Steven was up at 4 am, continuing to look for Codi.

Steven then went to Rochester Animal Control on Verona Street near downtown.

An employee walked him back to the cages housing dogs, most of them pit bulls. Before leaving, Steven filled out some forms describing what Codi looked like.

Wednesday morning, Steven got a call from a woman who had seen the Craigslist ad.

The woman told Steven that on her way to work Tuesday, she had seen Codi near Abbott’s ice cream on Lake Ave. near Lake Ontario.

Steven raced there, but once again, disappointment set in as there was no sign of Codi.

Then, Steven went back to Rochester animal control on Verona St. to see if Codi may have turned up.

It was then that Steven learned what had happened to his best friend.

An employee who overheard Steven describing Codi, pulled Steven aside and told him that Codi had been shot and killed by Rochester Police near the Lake Ontario pier.

“My mom said he had a bullet hole behind his shoulder, that was a kill shot. He was my best friend.” Steven told me as we sat down at Tom Horton’s in Greece, his eyes watering.

He told me about how he and Codi met.

Codi was just 5 months old when Steven rescued him from a home near his job on Rochester’s northeast side.

“I actually saw Codi being born, then as he grew I realized he wasn’t being taken care of. His collar was gouging his skin, he was dirty, he had fleas and worms when I got him.” said Steven.

Then Steven told me something about the first time he had gone to Rochester animal control to look for Codi, when he was taken back to see all the dogs.

“They were all barking and their ears were cropped, they had the big collars on, and looking at them you could just tell that they had a rough life.” he said.

And as I sat there with Steven I realized just how much he loved his best friend.

I also couldn’t help but think how ironic it was that Steven had rescued Codi, a beautiful dog, so he wouldn’t end up like those dogs Steven saw in those cages, only for some trigger-happy Rochester Police officer to shoot him before Steven could find his best friend.

I will be updating this story.