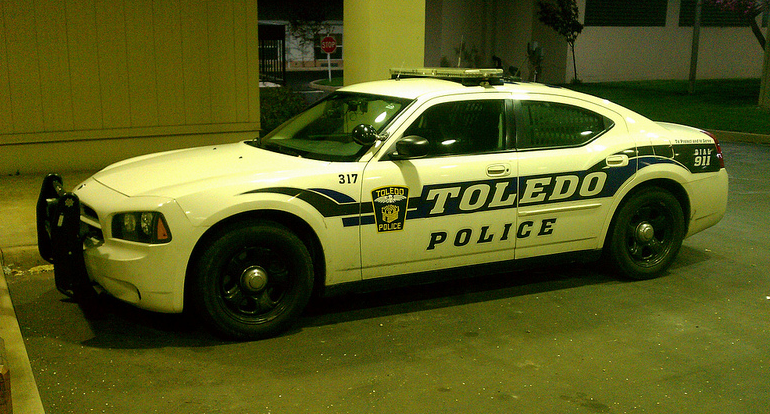 Jason Phillips took a picture of a Toledo police employee when in the hallway of Toledo Municipal Court and posted it to Facebook. For his action, which again, involved a “public employee” in a public place, Phillips has been threatened with time in a cage or a ransom, per claims that he obstructed official business.

The tactic Phillips used – which is often utilized by many of us here at CopBlock.org – posting the name and picture (and ideally the contact info) of an aggressor, to help make more folks aware of their actions and therefore gain some accountability – harmed no one.

Phillips snapped the picture of the still-unnamed police employee on Thursday, Jan. 10th, 2013. The next day he was threatened. The swiftness of this “justice” is telling – it showcases that those who claim the right to steal your coin to protect you care most about themselves, their colleagues, and their flawed institution.

Does it matter that the police employee in question is said to work “undercover”? Hell no. In fact, Phillips should be given even more props for sharing such information, since, almost without exception, those active in such endeavors work to entrap or cage those engaged in victimless actions.

If you honestly think that Phillips should be caged for his transparency-increasing action, think about the implications, were such a stance to be taken to its logical conclusion.

Already the person Phillips photographed claims the right to steal. That’s pretty messed up. Add to that, the hiding of the identify of the thief, and there is absolutely no check on their actions. What if all police or all so-called “public servants” were said to have such immunity?

Do you think that widespread, anonymous, institutionalized violence, will bring-about a good conclusion? What, historically, has occurred in societies where a person or group of people claim and are allowed to operate selective censorship?

And for Rebecca Zietlow, cited in the article below as a expert in “constitutional law”, to default to side with such criminals really shows how most talking heads align with the Statist Quo. Instead of thinking critically and pointing-out those clearly in the wrong, Zietlow condones the harassment of Phillips. In doing so, she only reinforces the double-standards on which policing today is based. So pathetic.

The same goes for the write-up by Taylor Dungjen, which gives no pushback to the misinformation peddled by those who are actually causing harm. Such unthinking “journalism”, which fails to critically consider the chilling implications of Phillips situation, does nothing to deter future rights transgressions by those who claim to be our authorities.

Read the write-up below and then feel free to call those employed at the Toledo police department to share your thoughts.

A Toledo man is facing criminal charges after posting on Facebook a photo of an undercover Toledo police officer and identifying the officer by name.

“It’s a huge safety issue,” said Sgt. Joe Heffernan, police department spokesman. “These officers are going into dangerous situations, oftentimes by themselves, without the usual things that an ordinary officer would have to protect themselves.”

Jason Phillips, 38, of 1842 Fernwood Ave. was charged in Toledo Municipal Court with obstructing official business Thursday, for the Facebook posting.

The affidavit says, “This act hampers or impedes that officer in the performance of his duties. This act also creates a risk of physical harm to the officer.”

The Blade does not identify undercover officers by name or in photographs.

Sergeant Heffernan said anything a person does to hinder an investigation is subject to criminal charges; identification of an undercover officer might prevent the officer from working in that capacity.

“It’s a very dangerous job, and when people do deliberate things to try to make it more dangerous for the detectives, we take it seriously and we’re going to charge them,” Sergeant Heffernan said.

Phillips was arraigned Friday morning and was ordered held in lieu of $10,000 bond, which was posted, according to court records.

In an interview Friday night, Phillips said he was in Toledo Municipal Court on Thursday when he saw the officer walking through a hallway and decided to take the picture with his cell phone and post it online.

Phillips was arrested that night.

Phillips said he told police the photo, which he captioned, “[This officer] has an all-star snitch team,” was a joke.

He said the photo was still on Facebook, but when he directed a reporter to his account, it was not visible.

Phillips said that if the photo was up, he would be willing to remove it, but he alleges that Toledo police confiscated his phone, his only means to gain access to the Internet.

He said he plans to present his case to the American Civil Liberties Union of Ohio.

It’s unclear if Phillips will contend that the posting is protected by the First Amendment, but such a contention is weak, said Rebecca Zietlow, a professor of constitutional law at the University of Toledo’s college of law.

“I think that even if there is a First Amendment right here, the government has a compelling interest to restrict the right,” Ms. Zietlow said. She added that fearing for the officer’s safety would be “pretty convincing to most courts.”

“Police officers, their jobs involve risking their lives, and why subject them to unnecessary risk like that?” Ms. Zietlow said. “It … seems pretty convincing to me [to restrict the right], and I’m a pretty strong believer in freedom of speech.”

This case appears to be the first of its kind in Toledo, Sergeant Heffernan said.

“That happens to us literally every day,” he said. “ … This situation is a little different in that someone is trying to impede or hurt this officer.”

If any undercover officer were outed, potential for harm exists, he said. But, he added, officers working undercover go through extra training, the sergeant said.

“It takes a lot of years and experience and training to get to the point where you’re an effective undercover officer, and someone posting some picture either in the media or on social media or a newspaper … it very well makes it so we’re not able to use that officer in that capacity anymore,” Sergeant Heffernan said.

“It’s a huge expense to the department and the city. … It’s serious business. Our last officer killed in the line of duty [Detective Keith Dressel] was an undercover officer. It’s a very serious thing.”

Facebook works with law enforcement agencies in the preservation and removal of information, said Johanna Peace, a spokesman for the company.

She said that the time it takes Facebook to remove photos varies; she said she could not comment on ongoing law enforcement matters.