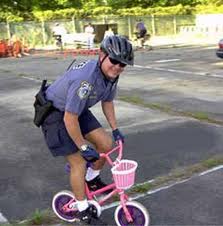 I was asked to write a guest post on a particularly egregious bike related incident that occurred in NYC last week. I have a unique perspective on the way drivers behave when encountering cyclists out on the open roads. That’s because I race road bikes competitively here in Colorado. I spend 10 to 15 hours a week training on “public” roads and have encountered the entire spectrum of reactions from drivers. Some love us and wave, some hate us and honk or yell at us, and some wear special costumes, drive fancy cars with lights, and can arrest us or beat us to within an inch of our lives. The last group are probably the most dangerous to us in the long-run. My teammates and I can deal with your average angry driver who, upon seeing a bunch of spandex-clad guys riding on the road, can’t help themselves but yell profanities at us and invoke the name of Lance Armstrong. However, cops can not only endanger our lives, but they can do so AND arrest us after the fact.

Take for example this NYC story. The short of it is that a woman was riding home on her bike when a driver nearly “doored” her. (For those not in cycling culture, getting doored is when a driver fails to check their surroundings before opening their door to get out while you’re riding by. Bike rider meets car door and a crash ensues. Ouch). The driver in question turned out to be a plainclothes cop. So the plainclothes cop opens his door, the woman brakes so quickly to avoid the door, she causes the rider behind her to crash into the back of her bike. She tells the driver to watch what he is doing in a verbal exchange. She rides away only to be chased down by an undercover cop in an unmarked car. She has no idea why this guy is running her down when finally the car skids to a stop in front of her and she is forced to get off her bike and walk up on the sidewalk. He gets out and starts wrestling with her in front of everyone. Remember, she still has no idea this guy is a cop. I’ll let her continue the story:

He didn’t say he was a cop and I thought, ‘This guy’s crazy, he’s attacking me!’ I screamed for help and he started restraining my arms and holding me so I couldn’t move. People on the street stopped and started asking him what he was doing. I did not hear him say he was a police officer or see any indication he was a police officer, so I was terrified. Then an NYPD squad car arrived and my initial thought was that they were going to save me from this guy; I figured the bystanders had called 911.

Of course the arriving cops did not save her from her attacker. They arrested her.

Once again we see the dangers of cops flexing their muscle without telling the victim that they are indeed police officers. Many times failing to mention this important fact is deadly. Think of all the no-knock raids that have resulted in deaths due to cops barging in on people who attempt to defend themselves against what they believe are criminals breaking and entering. In this NYC case, a bike rider was being chased down Duel style and then attacked, completely unaware that it was a cop all along. And even when it is entirely the cop’s fault, like it appears to be in this incident, you can still go to court and lose because it is your word against theirs. Take for example this case. And who could forget this NYC Critical Mass incident? Half the time the cops don’t even know the laws governing bike riding and what cyclists and drivers can and cannot do.

I take away a couple of points from these stories. One is that although angry drivers are a problem out on the roads, they can’t arrest you, charge you, throw you in jail, make you pay fines, and take your liberty away like angry cops can. I’d rather get yelled at by some hillbilly in a pickup truck than to have a cop get angry with me on the road. The cop can take my rights away and force me to rot in a cage, a hillbilly can’t. Second, these stories also illustrate the importance of having a camera on your person. If for nothing else, the camera gives us cyclists some recourse against aggressive drivers (and cops). I don’t think any of us regular folk could win an “our word against their word” issue with cops in court. The camera is the great equalizer. Third is the point of adverse selection. Who do you think is more prone to get angry with cyclists or runners on the road? Joe Six-Pack who works at the local convenience store? Or Joe Policeman who self-selected into a job with power (and guns!) over regular folks? Even if both Joes become angry at the exact same rates, Joe Policeman can legally act on that anger. Joe Policeman is accustomed to inflicting his will on people and using abusing his position of authority. This is just normal routine for Joe Policeman. Sure, regular guys catch bouts of road rage, but police officers can do something with that rage.

Ultimately though, the points above are merely symptoms of the problem. The problem is “public ownership” of the roads. When no one actually owns the roads and sets the rules governing them, you get the sort of free for all, man against man scenarios that play out on all public property. Private ownership of the roads would limit their access to only those who had a right to be there. Maybe that means bikes are allowed, maybe it doesn’t. Every road would have its own rules. Maybe I’d have to pay $10 a month to ride on a stretch of road that gets me to my favorite mountain pass. Yeah, paying $10 stinks sometimes, but what it does is change my status from “annoying guy in spandex” to “paying customer.” As a paying customer, the road owner and his employees have to treat me with respect – or else they lose my business. The drivers on the road also know that I deserve to be there. I paid my money just like they did. If they give me trouble, they could potentially be barred from using that road again. It’s truly amazing the peace and cooperation that comes through markets and emergent, spontaneous order.

Additionally, it is only through the profit and loss system that efficient rules can emerge and provide peace and cooperation. Like all goods and services, roads are subject to the same laws of supply and demand that govern the market place. Because of this, the rules that emerge on particular roads are either profit maximizing or they are not. If they are not, people will abstain from driving on them, buying property on or near them, starting businesses on them, and patronizing these poor roads. The road owner either changes the rules of the road or risks going under. It is then up to other entrepreneurs to fish out the lost opportunities for profits and buy the poorly managed roads. It is the same scenario that we see play out all the time. You know that crappy restaurant up the street that has terrible food and terrible service? Want to bet how long it takes for them to go under and lose their space to a new entrepreneur? In the market, if you don’t produce efficient, peaceful, profit maximizing rules, you lose money. In the world of government coercion, roads that foster conflict and chaos, get some additional arbitrary rules and more tax dollars.

Finally, let’s not kid ourselves. We are already paying a good chunk of money each year to drive on traffic congested, pothole riddled state roads. It’s not like the roads we have now are free. Let’s turn over the ownership of the roads to the private sector and reap the massive rewards. Driving deaths would plummet. Bike related injuries would drop. And traffic would largely be a thing of the past. Besides, private ownership and voluntary trade are moral. Public ownership, coercion, and taxes are immoral. Let’s stay on the right side of history on this one and advocate the moral route.