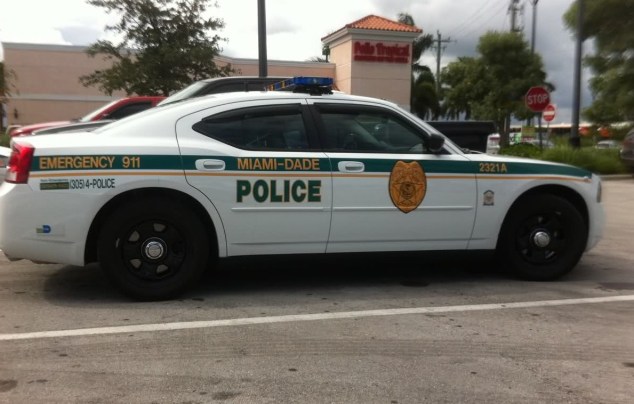 According to the Huffington Post, an entire Miami-Dade Police squad in Kendall has been disciplined — several of the officers, fired — after what CBS Miami reports is one of the worst dereliction of duty cases in the department’s history.

His supervisor, Sgt. Jennifer Gonzalez, was sitting at the cafe with Socarras — and was also recorded shopping while on duty at stores like Target and Lowes, brushing off work to rendezvous with her boyfriend, and visiting her parents in Cutler Ridge when she should have been on the job, according to CBS.

Socarras was also filmed twice kissing and spending time with a girlfriend in the parking lot of the Dadeland mall, allegedly while ignoring calls for armed robbery and burglary — forcing officers from other units to respond from greater distances.

The squad was surveilled by Internal Affairs investigators, who used video cameras and GPS vehicle trackers to document what members were doing while they should have been responding to calls.

“We’re talking about falsification of records, we’re talking about stealing time that doesn’t belong to you, because they are supposed to be available for service or duty and they’re not,” said former Miami Police Chief Ken Harms.

Altogether, five officers and Sgt. Gonzalez were allegedly caught ignoring dispatch calls, according to media reports. NBC6 confirms Socarras, Gonzalez, and Officer Jose Huerta have been fired, according to MDPD internal affairs documents, and others have been disciplined.

This article was submitted by Joe via Cop Block’s ‘submit tab.’

I’m sure the officers mentioned above have spent countless hours harassing people for victim-less “crimes,” but it seems they have made a serious effort to avoid performing the only services that I would actually voluntarily pay for: protection from violence and assistance in emergency situations. There will not be proper customer service so long as ‘customers’ are coerced into paying for the services. -Kate