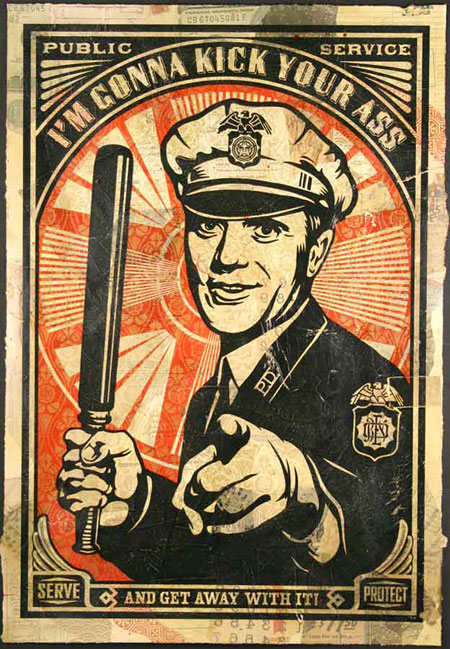 The writer of this post, which was shared via CopBlock.org’s ‘submit‘ tab, prefers to remain anonymous.

When I took him back to his apartment, he said there were robbers in his apartment. We called the police. When the police got there, I thought the handicapped man would be alright, so I went back to my apartment.

After about 10 minutes, I heard screams and cries. The robbers were beating the handicapped man; the robbers told the police officer that they lived there, and the police just left them.

I took my dog and got to the handicapped man, then dragged him into my apartment. He was bleeding everywhere, even out of his ears. He coughed up teeth and I held them in my hand. I was terrified. He was choking.

I called 911 and an ambulance came – so did the same police officer who was there before. I yelled at him, “How could you leave a retarded man alone with robbers?” He told me to shut my mouth. I said, “No. This is so wrong. You shouldn’t have left him; look what they did to him because you left him.”
The police officer grabbed my neck and pushed my arm up my back. He slammed me all over my living room, he kicked my legs out and broke my kneecap. I tried to stand and was tasered. He continued hitting me. He dragged me by my hair; I was handcuffed, but he still kept slamming me.

I have a head fracture, elbow fracture, dislocated kneecap, broken fingers, very large choke marks on my neck, bloody clumps of hair, and both wrists have contusions as does my head, among other injuries. I have never been beat up like this or even ever seen anyone get beat up like this.

He was crazy; he kept screaming and telling me I was going to jail. I was crying and couldn’t breathe. I have asthma. He would scream a question, but if I tried to answer he would say, “Liar,” and pull my arms up so high that I knew he was breaking my hand. This went on for what felt like forever.

When another police officer got there, he told him I was in the way of the EMT,  which was a complete lie. I spent two days in the hospital and can’t move my arms or hands. My right arm was too swollen to put a cast on, so I’m wearing a sling.

I have never even had a parking ticket in my life. I don’t drink or smoke. I am a nerdy middle aged woman who reads and keeps to myself all the time.

I went into some kind of shock and had to be sedated at the hospital. I am black and blue all over. The doctor said he had never seen anyone so badly beaten by a police officer. When I was gone, the police officer went back in my apartment and gathered up all the taser stuff and hid it, my neighbor told me.

I cant sleep. All I do is cry. I am so afraid he is coming back, or the robbers that he let go.