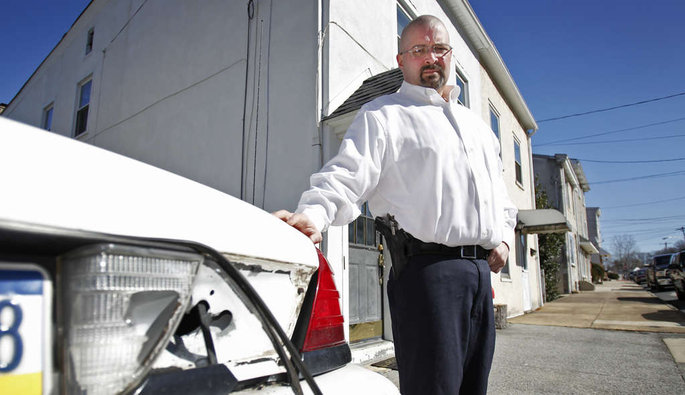 Fernando Antonio Salguero recently experienced the “protection” afforded by those who act in an environment absent proper incentives.

His situation was thoroughly covered in the two pieces below, originally posted at infowars.com and philly.com.

Feel free to share your thoughts with the aggressors:

Note – in the past Fernando has submitted this post to CopBlock.org: Philly Love Police Member Records Police Encounter Efforts to demonize preppers are in full swing as one Philadelphia area survivalist can attest.

A cover of the publication Philadelphia Weekly featured Fernando Salguero on its cover with the headline “Alarmed and Dangerous.”

Fernando Antonio Salguero, 39, has forged a survivalist reputation for himself in and around the Philadelphia area, founding an 800-member strong Meetup group where people can discuss survivalism and preparedness items.

Salguero recently found himself on the wrong side of the law when he went into his neighboring state of New Jersey to contest a ticket.

He was approached by officers outside of the Somerdale, New Jersey municipal court last Tuesday originally because he was suspected of parking illegally, according to reports.

Police ran his license plate and found he had a previous weapons charge and an offense for driving with a revoked license, enough to evidently prompt them to employ a bomb-sniffing dog.

“A police dog indicated explosive materials in the car, but police found none,” the Philadelphia Inquirer wrote.

According to the Philadelphia Daily News, Salguero demanded police obtain a warrant prior to the search (destruction of his property?) – a right afforded him under the Fourth Amendment of the United States Consitution (The right of the people to be secure in their persons, houses, papers, and effects, against unreasonable searches and seizures, shall not be violated..) – but when police failed to produce one, they went ahead with a K9 that alerted, and a bomb squad robot that “blew open the trunk of Salguero’s 2005 Ford Crown Victoria.”

“I offered them a key, but they just blew it open with their robot to justify them having their toys,” he said.

What dangerous items did they find in his trunk? Items you would normally find in any prepared person’s trunk: flares, an extendable baton and pepper-spray, which police labeled as “tear gas.”

When pressed to explain why he would have such dangerous items in his trunk, Salguero expressed to the Daily News that ideally he would like to be prepared for various scenarios and that New Jersey’s over-paranoia has led them to nearly become a complete “slave state”:

“If there’s a car accident and something’s on fire and there’s leaking fuel, I want to be able to affect a rescue of that person. A baton is there to break the windows. There’s no problem [with having a baton] here in the commonwealth of Pennsylvania, but in the state of New Jersey the people are much closer to the slave state. Slaves are not allowed to be armed . . . at all.”

He was charged with weapons violations and possession of destructive devices and held on a $35,000 bail.

“Salguero, 39, is the founder of Survive and Thrive, an 800-member group that meets regularly to discuss such topics as ‘stealth and subterfuge,’ ‘repelling home invasions’ and ‘flexing the U.S. Constitution,’” according to the Philadelphia Daily News.

He supports Architects and Engineers for 9/11 Truth, Copblock.org, jury nullification, and pledges to the Constitution. He also refuses to fly because of invasive TSA airport procedures and is a staunch supporter of Ron Paul. Does this sound like someone you know?

Next month, he hopes to have the charges against him dismissed.

This is just one of the latest cases illustrating a concerted effort to single out “preppers” as thought criminals and potential terrorists.

Last year, a “prepper” from the National Geographic show Doomsday Preppers visited his doctor complaining of chest pains. When the doctor recommended he have tubes inserted to assist his breathing, survivalist David Sarti refused and was deemed suicidal, after which police were sent to his house to forcibly haul him to the emergency room. Later when he attempted to purchase a Glock 21 firearm, he found he had been flagged by the National Instant Criminal Background Check System and was denied the purchase.

Last year, we also learned the FBI was monitoring vistors to “prepper” website SurvivalBlog.com by means of a cookie that tracked their web activity.

In the aftermath of the Sandy Hook school tragedy, reports that suspected gunman Adam Lanza’s mother Marsha Lanza was a “prepper” began circulating, further adding fuel to the fire of prepper demonization.

Perhaps most disturbing, last October a National Guard member known as “Soldier X” spoke via phone with Infowars Nightly News Producer Rob Dew regarding a recent briefing his unit underwent on actions the military would take in the event that an Obama election loss sparked rioting in America’s streets.

He stated that soldiers had been told that if riots would have occurred, “Doomsday preppers will be treated as terrorists.”

“Citing not only recent widespread threats to riot if Mitt Romney were to become the next U.S. president, but threats to actually assassinate him should he win, Soldier X’s superiors dispensed plans of how the National Guard would be responsible for “taking over” and quelling such unrest,” reported Infowars’ Melissa Melton.

“’They have a list compiled of all these doomsday preppers that have gone public and they plan to go after them first,’ Soldier X said. He claimed those in charge are acting under the belief that preppers will be ‘the worst part’ of any potential civil unrest.”

Survivalist/conspiracy theorist says his views have made him a target

SOMEDAY, the sun will die, the Earth will ice over and civilization will disintegrate in the darkness.

Fernando Antonio Salguero will be long gone by then – we all will be – but the Montgomery County resident says there’s nothing wrong with preparing today for the possibility of future catastrophes.

Salguero, 39, is the founder of Survive and Thrive, an 800-member group that meets regularly to discuss such topics as “stealth and subterfuge,” “repelling home invasions” and “flexing the U.S. Constitution.”

“All that I am is a kid who grew up in a very, very rough way who wants to leave the world in a better condition than I found it for my children,” he said Monday, a Colt .45 on his hip, during an interview at his home in Bridgeport.

Being prepared to survive in an emergency is just common sense, akin to carrying a spare tire in the trunk of your car, Salguero said.

But he has a lot of other survival “tools,” beliefs and theories deep in the trunk that he thinks have made him a target.

Last week, police in Camden County blew open the trunk of Salguero’s 2005 Ford Crown Victoria because, he says, he wouldn’t let them open it without a warrant.

“I offered them a key, but they just blew it open with their robot to justify them having their toys,” he said.

Police said they blew the trunk open after a Camden County Sheriff’s Department K-9 detected explosive materials in the car.

Salguero is also involved with groups that aim to inform juries that they can “nullify” laws, that pledge to defend the U.S. Constitution “against all enemies, foreign and domestic,” and that refuse to fly because of airport security screenings.

“It’s a big deal, and we trade it [our personal liberties] away so we can go to Disneyland or go see our grandmother,” he said.

Salguero also supports Architects and Engineers for 9/11 Truth and believes that it took more than two airplanes piloted by suicidal terrorists to bring down the Twin Towers in 2001.

“It is a taboo subject and it is very sensitive to a lot of people,” he said of 9/11. “It deserves a new and unbiased investigation. There’s a tremendous amount of detail and cover-up, and that’s an uncomfortable pill.”

One former Survive and Thrive member told the Daily News that he left the group a few years ago when it began mixing political beliefs with practical survival methods.

“The first couple of meetings were rather interesting, if not a little bizarre,” said Andrew Greene of Philadelphia. “There was too much concentrated crazy there.”

Salguero said, however, that Greene had been kicked out of the group “for spreading lies.” “We keep things apolitical,” Salguero said.

Salguero, who earns a living installing water-filtration systems, said he was in Somerdale, Camden County, on Feb. 12 to deal with an old traffic violation. He thinks authorities knew he was coming.

Police said his car was parked illegally in front of the Somerdale municipal court. Police asked to search his car, and Salguero said no.

After blowing open the trunk, police discovered what they called “rocket-propelled flares, an extendable baton and tear-gas canisters.” They charged Salguero with weapons violations and possession of destructive devices, and took him to the Camden County Jail on $35,000 bail.

The flares, he said, are commonly used as distress signals, and the “tear-gas canisters” were merely larger pepper-spray cans. Salguero said he forgot the baton was in the car, but claimed that it serves the same practical purpose as rope or a pry-bar.

“If there’s a car accident and something’s on fire and there’s leaking fuel, I want to be able to affect a rescue of that person. A baton is there to break the windows,” he said. “There’s no problem [with having a baton] here in the commonwealth of Pennsylvania, but in the state of New Jersey the people are much closer to the slave state. Slaves are not allowed to be armed . . . at all.”

Salguero said the incident in Somerdale was about “control,” noting that he’s also a member of an organization called CopBlock.org, a website that aims to “highlight the double standard that some grant to those with badges by pointing to and supporting those harmed.”

Somerdale police did not return phone calls for comment. Once Salguero was detained there, though, numerous “liberty-minded” individuals with whom he associates began calling Somerdale police and the Camden County Prosecutor’s Office, he said.

“This seems like a manhunt, being pulled over for being suspicious and having his car searched,” a man named “DerrickJ” posted on a YouTube video of his calling several Camden County law-enforcement agencies after Salguero’s arrest.

Salguero said he’s hoping to get the charges against him dropped next month. His friend Michael Salvi, who runs the group Truth, Freedom, Prosperity, said he and others in Salguero’s circle will be there if he needs them.

Salguero, who says he grew up poor with an abusive mother in Kensington, said he doesn’t plan to go away quietly. “I’m not just doing defense here,” he said. “I’m doing offense, as well.”