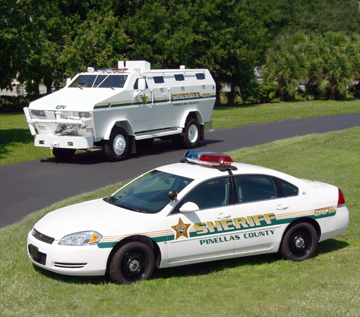 On June 7th, 2012 I was summoned to a red-light camera “hearing” at which your department conducted security. During this hearing, I pointed out that it was an unlawful hearing for an unconstitutional law, a criminal fraud operating under color of law, legalized extortion, primarily victimizing the poor. I attempted to seek a redress of grievances for having currency extorted just to get a hearing to then beg for an appeal to this camera’s alleged ruling against me. I realized and pointed out that this hearing was in fact a kangaroo court, a star chamber, where you are considered guilty until proven innocent, as is widely documented now and which your “office” of course knew full well at the time. I attempted to tell these truths as is allegedly my right of free speech, redress of grievances, due process, etc when deputy Robert Isham brutally attacked me.

As Isham says in his report, “Leroux was demanding a jury trial . . . While questioning Majewski’s authority over the matter . . .” Isham also states in his report that before the hearing even started he “received information that a subject identified as Christopher David Leroux, a documented anti-government sovereign citizen, was to appear in Traffic Court on 6-07-1012 at 1730 hours.” This seems to indicate that the attack was premeditated and motivated by what Isham had been allegedly informed were my political beliefs, by someone unnamed in that report. Are people with certain political beliefs, according to unnamed reports, all “subjects” of this police state if they dare to go to one of your hearings to defend themselves against your plunder? What cut is your department getting from this camera extortion in partnership with this company in Arizona?

The justifying assertion for this premeditated attack is that I didn’t leave when ordered fast enough. Yet Isham admits “while the hearing officer attempted to further explain his ruling . . . Deputy Allen was attempting to speak with Leroux. . .” So apparently defendants in your star chambers are expected to hear multiple people speaking at the same time. The hearing was recorded. I did not ever directly refuse to leave. I was there to tell the truth in what I knew was a kangaroo court where you are guilty unless the hearing officer feels like letting you off the hook for purposes of propaganda. I was not there to get beat up by this brute who claims he “secured Leroux’s arm and used an amount of force necessary to remove Leroux from the courtroom . . .”

What Isham fails to say, and what was witnessed by James Cox, who was arrested for filming the attack upon me, was that even after he forced me out of the hearing, while twisting my arm up my back brutally, he slammed me head first through the doors exiting not just from the courtroom but then also from the entry area to the corridor, and once in the corridor viciously slammed me head first into the glass window. Thus we see the reason for the seizure of my friend’s camera and his arrest.

There are outright fabrications in the officers’ reports. Sgt Donald Mast reported that it was deputy Joseph Heintz that “secured leroux’s arm and used an amount of force necessary . . .” Heintz reported that I spoke of my “rights as a sovereign citizen.” The hearing was recorded. This was never said, again indicating the aforementioned political overtones to this setup. Heintz also reported that he “had to physically escort Laroux [sic] out of the room . . .” Deputy Darlene Allen also reports that, “Heintz took control of leroux and escorted him from the courtroom.” But it was Isham who attacked me, not Heintz. Isham in his report fails to say anything about the attack on me, claiming he arrived after the attack. There were at least twenty witnesses to this fabrication by Isham’s own report and it happened in front of the court’s video cameras, plus the video on Mr. Cox’s camera.

Instead of reporting how he attacked me, Isham reported that I later, downstairs, “started grabbing around Sgt. Mast in an attempt to get control of the camera himself.” This is an obvious, ridiculous lie. I was a dozen feet away from Mr. Cox when I noticed they were assaulting him and demanding his camera. I told Mr. Cox to give the camera to them. This was recorded in the device they stole from Mr. Cox. The other officers do not report any of these bold lies that Isham reports. Deputy Bruce Wilson, who reports witnessing the arrests, says absolutely nothing of any of this and says only, “Dep. Isham also took Leroux into custody.”

If I had really grabbed the camera after they were in the process of taking it from Mr. Cox, it is obvious the charge wouldn’t have been nonviolent resistance but active resistance. Isham’s assertion is a totally absurd lie about something that happened in front of court cameras and many witnesses. When they attacked Mr. Cox to steal his camera, I merely picked up my Nook off the floor to keep them from stepping on it during their assault on him. I came nowhere near them. Isham even retrieved my nook, later, after I asked him numerous times to get it. He knew full well that all I was doing when he arrested me was picking up my Nook. Again, none of this is mentioned in his report, of course.

The bottom line is you are the very people claiming to protect me yet were involved in a criminal fraud to extort my currency, conspired to use your power against me and to silence even my complaint of your abuse, attacked me for speech, for attempting to seek a redress of grievances and for my alleged political beliefs, then dared to charge me with nonviolent resistance to your unlawful and immoral abuse of power, your tyranny, ransoming me from your injustice system to the partial freedom of your police state.

Now I see in the media that the Florida Sheriff’s Association is saying they will not enforce any new gun control laws they consider unconstitutional. Well, first of all, it must be said that the right to free speech normally and should never require a permit, a license, registration, a background check, be taxed or forced to purchase liability insurance to exercise so neither should the right to bear arms. A right doesn’t require permission to be exercised. That is what makes it a right. I explain these basic principles of freedom because I see that despite the Florida sherrif’s association’s statement, you support universal background checks and other infringements of the 2nd amendment. You want to take more of my rights and hassle me for daring to want to defend myself, while claiming to protect me.

So what we have, to sum up, is a sheriff’s office which routinely violates the constitution by enforcing red-light camera tickets, kangaroo courts against the people they claim to protect, that also want to violate the 2nd amendment while claiming to protect it. You have no credibility, sir, not the slightest little bit. And of course there are thousands, if not millions more “laws” you are currently enforcing which are clearly unconstitutional and which the American revolutionaries would obviously condemn. I compliment you on your alleged willingness to take a stand for freedom, eventually, if you ever do, even if it is a confused, pathetic stand. You are in effect stating that I was correct for standing up to your unconstitutional star chamber by saying you will draw your own lines someday, maybe. How about an apology and a refund? Holding my breath.