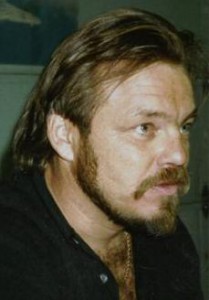 “AKA Blastmaster aka Audree Augustus” submitted the following story via CopBlock.org’s ‘submit‘ tab.

My friend, Terry, had a major heart attack about six months ago. While in the hospital, his throat was damaged from tubes being inserted and removed which required a tracheotomy. He was told it was temporary and would be corrected within a couple of weeks. As months went by, he was in and out of the hospital several times, his throat was not repaired, and his condition deteriorated to the point that he had difficulty breathing, lost his voice completely and had a hard time communicating. He was given a kit with an apparatus for cleaning the tube in his throat, which required constant care to prevent infection and allow air to pass effectively to his lungs. Dawn is Terry’s girlfriend of just a little more than a year. She had moved in with him shortly after the heart attack to help care for him. She cooked, cleaned and drove him to and from the hospital, doctor visits, pharmacy runs, etc.

Early in February, Dawn and Terry had some kind of argument while in front of a doughnut shop around the corner from where they lived. Someone at the doughnut shop called the police, but by the time they responded, Terry and Dawn had already left. The incident was captured on the surveillance camera at the doughnut shop and footage was handed over to the police to investigate. The next day, LAPD successfully found where the couple lived, so they went there to find Dawn alone. She explained the story to them and said she was not the one who called them; Terry was no threat to her, or anyone else for that matter. The officer was persistent and he kept asking Dawn questions that simply didn’t relate to her and the situation. They showed her the video taken from the doughnut shop and they demanded to know where Terry was. They told her they were going to arrest Terry and charge him with kidnapping because of the video; her statement was irrelevant according to the Detective. The officers left and vowed to return for Terry.

Terry has no history of violence; I’ve known him for 35 years and never known him to be hostile. I know he has been depressed and frustrated lately, yet never violent.

It is understandable that the police have a responsibility to protect Dawn, however the circumstances, once explained to the officers, should have been clear.

On Thursday February 14, 2013, the police arrived at Terry’s home and arrested him. Dawn pleaded with the officer and told them he needed his tracheotomy kit, but the Officer refused to take it or let him take it.

I asked her for the contact details, or at least the name of the Detective who took Terry into custody, and she responded with the phone number of Detective Marino of Foothill Division.

Knowing that Terry could not speak, we were worried. A mutual friend, Audree, contacted Detective Marino right away to be sure they were aware of Terry’s medical condition and to find out what they were going to do with him.

Audree explained the severity of Terry’s condition to Detective Marino and expressed how critical it was to keep the area clean. He assured us that Terry would be taken care of. Audree attempted to offer further details and information regarding Terry’s typical demeanor and his character; Detective Marino responded rudely by saying, “I don’t make the laws, I just follow them.” He offered an alternative. “Terry can bail out if you want him out.” The bail amount was set at $100,000.00, which meant we would need $10,000.00 cash to get Terry out of jail. The detective then proceeded to tell us that this was a holiday weekend and considering it was Thursday and after twelve o’clock, based on the flawed scheduling systems used by the courts, Terry would not be seen by a judge until Tuesday morning.

Audree continued to stress how essential it was to Terry’s health that he use the apparatus and that it was not Terry’s nature to complain about anything, but also that Terry could not complain because Terry could not talk. Marino said that Terry refused to talk to him and commented as to Terry’s ability to even write. Marino continued to say Terry was being cared for and that he was in fact in a medical evaluation right then, after which he would be brought to Van Nuys jail to be held until Tuesday. If it was determined by the medical evaluation that Terry required the apparatus or any other treatment, they would get it for him. They would watch over him. He attempted to assure us in a condescending tone, again stating to us that, at this point, there was nothing else we could do. Our persistence was successful only to get Marino irritated and in closing he said, “Look, we are the police, we aren’t just going to toss him in a corner or in a cell for five days and let him die.”

We then contacted the public defender’s office and spoke to the supervisor there as an independent attorney to see what could be done. However, there were no options other than to wait, because Terry was not even logged in or entered into the LA County Public access system, yet. Officially, he was not in jail at that point which was almost 4:00 PM. At roughly 5:30 PM we checked on the inmate locator on the LASD website and found that Terry was finally in the system, or booked, except it showed Terry had been sent to the Twin Towers in LA and the bail was confirmed to be $100,000.

Later that evening, Dawn received a phone call from LAPD and was informed that while Terry was being booked and in what is referred to as “general population reception,” his tracheotomy tube had been ripped out or removed, Terry lost consciousness, and 911 was called. It took twenty minutes for paramedics to respond, and Terry was pronounced dead at approximately 8 PM.

We called Detective Marino several times over the next three days; unable to reach him, we left multiple messages. He finally answered the phone Monday afternoon, yet would not provide any details and passed the phone to his supervisor for comment. She also refused to give any details except that the case or “incident” was transferred to the homicide division and she provided the phone number for the detective now in charge of the case.

As of today, we have not seen or heard anything on the news. I would think when an agency such as LAPD is involved in a situation as horrific as this, they should have an obligation to notify the public, regardless of fault. We have a right to know what happened, right? Terry did not have to die and there are laws that should have protected him. Regardless of who you are and what you are accused of, right, wrong, or indifferent, you still have rights. LAPD disregarded those rights and violated Terry’s right to obtain medical care essential to his survival. LAPD was brutally negligent in their duties. Detective Marino knowingly and willfully violated all of Terry’s rights by refusing to allow him to take the device, even when repeatedly advised of its importance.

Detective Marino was directly responsible for Terry’s safe entry into the jail facility and the deputies in charge at Twin Towers should have given Terry the medical care he required immediately upon his arrival. Instead, he was left to wait in a general population setting with little air circulation for even a healthy person to breathe comfortably, let alone someone without the means to do so freely. To be denied the apparatus essential to getting a breath is barbaric and inhumane. Furthermore, in a facility the size of Twin Towers, swarming with cops, officers, deputies, bailiffs and others of the like, including the so-called “nurses” in the general population section of the jail, they had to dial 911 for the paramedics to administer CPR? Are you able to wrap your head around that? I most certainly can not. These so-called professionals who we look to for emergency assistance, who we count on to protect and serve don’t even know the basic, essential life saving techniques such as CPR? Define ignorance. Can you please help me understand how this can be true? We can’t let them continue to get away with this. LAPD needs to be held accountable for the lives they so carelessly destroy. Please help me get the message out; send this story to everyone you know so we can put an end to this madness, so you or someone you love never suffers like my friend did in his last moments, or as we do from the loss of such a remarkable man. Let them know we are listening, we wont stop listening and until they hear us loud and clear and make changes now, we won’t stop; we are TALKING FOR TERRY!

–A K A Blastmaster aka Audree Augustus