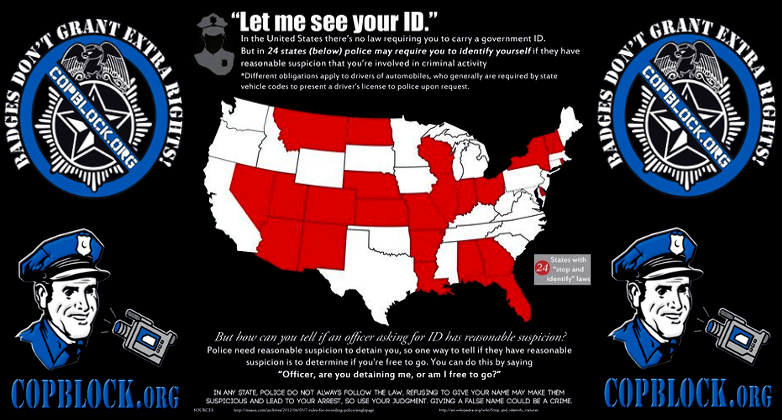 Everyone should know their rights regardless, but it’s even more essential that you do if you intend to go out and film the police. Therefore, you should know if the state you live in has passed “stop and identify” statutes. If that is the case, then you should also know what is and isn’t required under such laws.

In 24 states police may require you to identify yourself. (If they have reasonable suspicion that you’re involved in criminal activity.)

“Stop and identify” statutes are laws in the United States that allow police to detain persons and request such persons to identify themselves, and arrest them if they do not.

Except when driving, the requirement to identify oneself does not require a person who has been detained to provide physical identification. Verbally giving identifying information is sufficient to satisfy that requirement.

In the United States, interactions between police and citizens fall into three general categories: consensual (“contact” or “conversation”), detention (often called a Terry stop), or arrest. “Stop and identify” laws pertain to detentions.

At any time, police may approach a person and ask questions. However, the person approached is not required to identify himself or answer any other questions, and may leave at any time.

Police are not usually required to tell a person that he is free to decline to answer questions and go about his business. A person can usually determine whether or not the interaction is consensual by asking, “Am I free to go?”

Police may briefly detain a person if they have reasonable suspicion that the person has committed, is committing, or is about to commit a crime. Embedded below are videos from Flex Your Rights describing what reasonable suspicion is and when you are required to provide ID to the police. Police may question a person detained in a Terry stop, but in general, the detainee is not required to answer.[10] However, many states have “stop and identify” laws that explicitly require a person detained under the conditions of Terry to identify himself to police, and in some cases, provide additional information. (As of February 2011, the Supreme Court has not addressed the validity of requirements that a detainee provide information other than his name.)

A detention requires only that police have reasonable suspicion that a person is involved in criminal activity. However, to make an arrest, an officer must have probable cause to believe that the person has committed a crime. Some states require police to inform the person of the intent to make the arrest and the cause for the arrest. But it is not always obvious when a detention becomes an arrest. After making an arrest, police may search a person, his or her belongings.

Variations in “stop and identify” laws

What is Reasonable Suspicion?

When Are You Required to Provide ID to the Police?