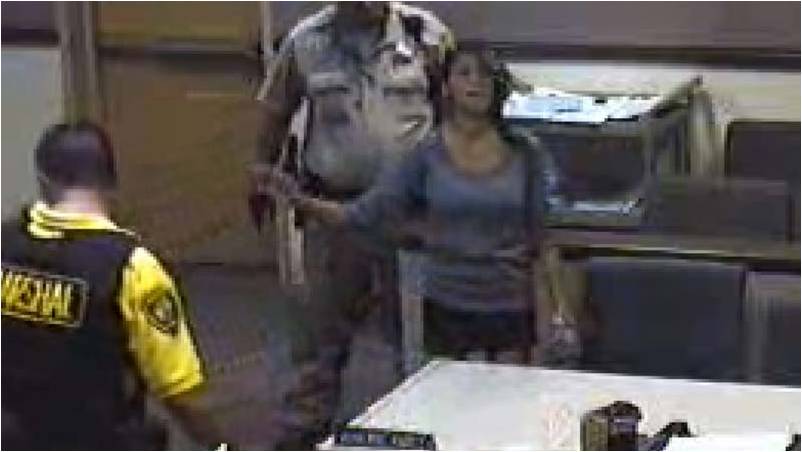 As reported by Channel 8 news in Las Vegas (video here), multiple employees of the Clark County family court are under investigation for alleged cover up of sexual assault by a court marshal.   Video shows Monica Contreras claiming a court marshal sexually assaulted her.

Marshal Ron Fox has Marshal James Kenyon arrest Ms. Contreras “Because of false allegations made against a police officer”, there is no such law.  However, in his report arresting officer James Kenyon lists the offense as “Disorderly Conduct”

“Did willfully resist a Public Officer Deputy Marshal J. Kenyon P#123 in lawful discharge of his duties by pulling her arms from the officers when she was being placed in handcuffs”

Ms. Contreras pled with  to hearing master Patricia Donninger to listen to her, but Donninger never acknowledged Contreras, instead she talked and played with Contreras’s daughter.

Investigators were not informed of the alleged courthouse sexual assault from family court Lt. Steve Rushfield.  After a six-month internal affairs investigation, Fox was fired.  No one from the Clark County courts told Contreras that her claims were validated.

Clark County court administration released a statement reading: “Court personnel are prohibited from commenting on the video because it’s a personnel matter. When the actions of any district court employee are called into question, the court immediately responds by conducting a fair, thorough investigation and, upon completion, taking appropriate action.”

Fox maintains his innocence and is suing Clark County for wrongful termination.  His attorney claims that Marshal Rick Fox arrest of Ms. Contreras was legal because nobody in the courtroom tried to stop him.