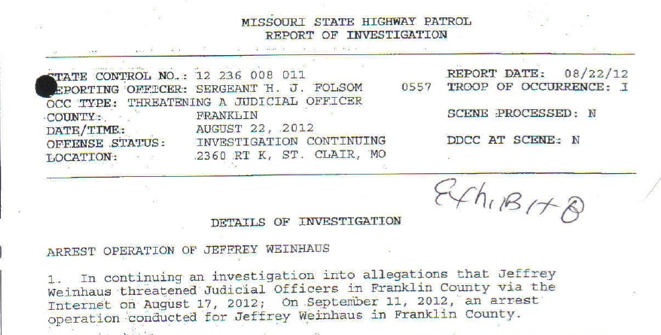 The Report of Investigation submitted on Sept. 11, 2012 by Henry Folsom, the Missouri State Highway Patrol employee who last September shot Jeffrey Weinhaus, has made it’s way to Cop Block.

This is the latest of documents uploaded to Cop Block’s Scribd account. It, along with other related documents, can also be viewed at CopBlock.org/JeffreyWeinhausDocuments

Who’s allegations? What was claimed to have constitute a threat? Against what persons(s) specifically? The fact that none of this is detailed should raise concern.

Have you ever derided a “public official”? I’d guess a lot of us have.

When recounting to your friends the multiple times you’ve been pulled-over and harassed by the same police employee on a fishing expedition are you apt to use glowing descriptors?

When giving an overview of a beat-down you witnessed a couple months prior outside a club, in which blows were delivered to a peaceful person by someone who claimed obedience per their badge, might you use colorful language to aid in communicating the seriousness of the situation?

The threats Folsom cited stemmed from the Aug. 16, 2012 video Jeffrey Weinhaus published called The Party’s Over. Yes he used the word “motherfucker” more than once. But was anyone made a victim? Is swearing rationale enough for the theft of ones computers by “the authorities”?

If Folsom’s vague language – that fails to articulate any demonstrable harm, is accepted on its face, then what’s to prevent such claims to be made against anyone who derides a “public official”?

Look at Folsom’s text. Could the same ambiguous claim referencing such a statement be attributed to you? I’m sure, for example, many people have called Manny Ramos and Jay Cicinelli – individuals who beat-down and killed Kelly Thomas – motherfuckers. Should all those folks have their houses searched and computers and cameras taken?

Why are Folsom and Mertens in Franklin County at all? They work out of Troop I of the Missouri State Highway Patrol. Franklin County is supposedly under the jurisdiction of Troop C. If Weinhaus had really done something worth looking into, why hadn’t someone from Troop C spearheaded the follow-up?

Folsom doesn’t say who at the Franklin County Prosecuting Attorney’s Office he spoke with but I’d guess it was Robert E. Parks, the same person who notarized the Aug. 22, 2012 search warrant and who’s now prosecuting Weinhaus? It sure seems like a way to provide-for job security.

I should point-out too that I’ve never seen a copy of the arrest warrant Folsom claimed to have obtained on Sept. 11, 2012. Nor have I heard from any of the people on the ground in Missouri that are closer to the situation that they have seen the arrest warrant. We’ll see if this document ever emerges…

Again, Folsom is vague. With whom did he contact at Franklin County Sheriff’s Department? Who declined to assist? If such a call does exist, can a record of a time stamp through the switchboard be provided? In fact, Folsom’s claim conflicts directly with statements made by Gary F. Toelke, who’s employed at the Franklin County Sheriff’s Department.

In a letter response to Weinhaus and in a phone call with me, Toelke, in no uncertain terms, noted that he and his colleagues were not made aware of Folsom’s actions. This conflicts directly with MoRS 43.200 (pg.3).

Interesting to learn of the inclusion of Patrick Cunningham Mike Maruschak, employees of the Federal Bureau of Investigation. Did Cunningham or Maruschak writer reports about the incident that transpired? One would think such a practice would be protocol. Why haven’t those been made public?

Note Folsom non-nonchalantly admits to lying to Weinhaus – to pretend that his computers were to be returned. Police employees can and do lie. Their friends in legal land say such a practice is perfectly acceptable. Strange, that’s not something I’d choose to pay for…

Were reports written by the as of yet unnamed employees from Troop C of the Missouri State Highway Patrol who were present? Why haven’t those been made public?

Did the fact that the MFA Oil station didn’t have surveillance cameras factor into the decision by Folsom and crew to suggest it as a meeting place to Weinhaus? I’d guess we’ll never know but something to ponder. Again, the use of lies is frequent. Folsom knowingly peddled a false rationale to Weinhaus – that he was to receive his computers and cameras. And that he – Folsom – would only be accompanied by one colleague.

It’s clear now, in retrospect, that it would have been wise for Weinhaus to trust his gut and to appear with others. At least then the interaction could have been filmed from multiple angles. And who knows – it could have deterred what unfolded from happening altogether.

Have the two men who were working on the gutters been interviewed? It’d be interesting to hear if the way their remember the story unfolding matches more-closely that of Folsom or Weinhaus. I’ve also heard of at least two other witnesses – a man delivering sodas from his truck, and a teenager who is hearing impaired – though Folsom makes no mention in his write-up. If anyone has contact information for any of these witnesses please encourage them to reach out via pete@copblock.org

It’s pretty telling that Weinhaus right away disclosed to Folsom that he didn’t trust him, and that he recognized that meeting in a public place would provide at least some level of protection. At least that was the thought. It’s clear now, as it’s been communicated to me all along, that it was Folsom who suggested the meeting location. Folsom here claims that “I immediately recognized that Weinhaus was not responding to my conversation”, including his statement to Weinhaus “that I had the papers right here for him to sign to get his computers back.”

Yet both of these, nor the instruction to Mertens, never happened. That’s objectively provable thanks to an audio recording that later emerged. Unbeknownst to Folsom, Weinhaus had, before he stepped out of his car, called his ex-wife Val on his cell phone, which he put in his pocket. Val recorded the call.

As a lesser point, note that Folsom’s statement – “Weinahus remained in a stationary position along side of his vehicle” differs from the news report that initially aired, which communicated with viewers that Weinhaus “started walking” toward Folsom and Mertens. Admittedly, when stories are timely it’s not uncommon for errors, as all info isn’t known, but it causes me to wonder if the media source corrected it’s misstatement. To me, it’s just another example of the lamestream media defaulting to side with the so-claimed “authorities.” Missouri is an open carry state. Weinhaus arrived with a handgun in a holster on his hip, as did Folsom and his cronies. Sure, some folks wouldn’t advise open carrying to a pre-arranged meeting with folks who wear badges (or is that in fact exactly the time to exercise ones rights?) and even if that’s wise advice, it still doesn’t make Weinhaus a criminal for doing so.

Folsom wrote that he “ordered Weinhaus to get his hand off the gun.” Not once is Folsom or anyone heard requesting that a hand be removed from a gun. Weinahus didn’t trust Folsom. Folsom even admitted that in this write-up.

What was Weinhaus to think when he saw Folsom draw his pistol and “position it at the low ready”? Remember, Weinhaus had been told by Folsom, repeatedly, that he was to receive back his property, noting that he “assured” Weinhaus of that point.

Think about it another way – if Folsom was correct in his actions – of unholstering his weapon and holding it in the “low ready” based simply on the fact that he was interacting with someone open carrying – then what’s to prevent such latent hostility from being replicated tens of thousands of times across Missouri when anyone wearing a badge encounters someone else open carrying, who doesn’t also have on a badge? Folsom admits to shooting at Weinhaus a total of four times. Mertens might have fired his weapon. Were those weapons secured immediately afterwards so ballistic tests could be conducted? I’d hope that was standard operating procedure.

Yes, as some may correctly point-out, such testing isn’t always foolproof as the markings left from a barrel on a round change throughout the life of the barrel, but it’d still be accurate enough to compare the rounds next fired through to those barrels (say, in a controlled environment like a crime lab) harvested from Weinhaus’s body.

Also, how can Mertens not be sure if he’d fired his weapon? Isn’t he a trained professional? Admittedly, such a situation is likely very tense, so even if we grant that Merten’s recollection may not be spot-on, in the least, couldn’t he have ejected the magazine and cleared the chamber of his pistol, to then deduce if he’d fired?

Folsom notes that Weinhaus had been “continually” drawing his handgun, yet it was only “partially out of the holster” post-shooting – was Weinhaus moving in slow-mo?

And I’ve never once heard of a police employee securing the firearm of someone they allege caused them fear of death push their firearm back into their holster and then removing the holster from their belt. Wouldn’t it be safer to remove the firearm, which was already supposedly unholstered? I’m hoping to get a copy of the 26min audio that was recorded via the phone in Weinhaus’s pocket (thus far only a less-than 30-sec clip of the shooting has been shared) – as that allegedly contains a question near the end that has one person asking about the location of the handgun, which would mean Weinhaus’s handgun was not secured in the mannter claimed.

Folsom wrote that  Mertens “attempted to give further medical treatment to Weinhaus’ injuries.” Again, I don’t now possess objective information but I’ve been told that after the shooting, Weinhaus was left unattended until the EMTs arrived. I’m hoping to get a copy of the 26min audio that was recorded via the phone in Weinhaus’s pocket – from which it can be inferred due to the lack of such related conversations, that medical care was not rendered. When/if that happens it’ll be shared at http://CopBlock.org/JeffreyWeinhaus. Alternatively, it’d be good to hear what is recounted by witnesses at the scene.

Weinhaus was moved from the MFA Oil parking lot by ambulance up the road to an awaiting helicopter, which brought him to Mercy Hospital in St. Louis.

Nothing like Troop C employees “investigating” Troop I employees.