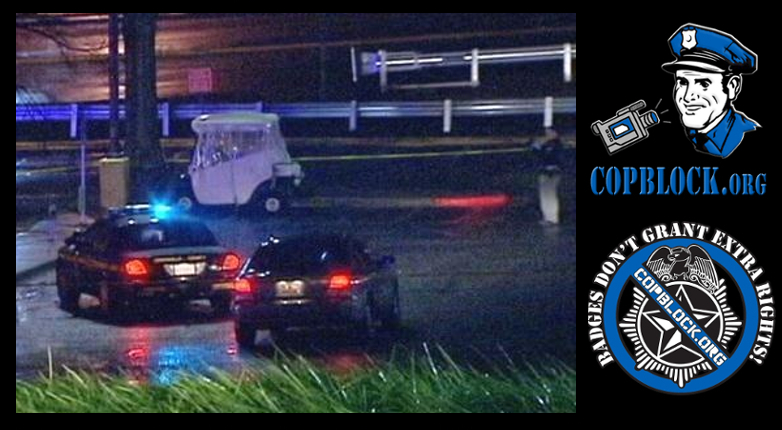 Two months ago in Greenville, SC, Wesley Swilling was shot at and hit multiple times by Frank Abella and a still-unnamed man man. Swilling died. Abella and his accomplice are said to have acted reasonable, considering the circumstances.

At least that’s what their colleagues, who also wear badges, would have you believe. And apparently, what the local media thinks worth parroting without question.

The as-of-yet-unnamed second shooter is an also employee at the Greenville Police Department:

Frank Abella is an employee at the Greenville Sheriff’s Office:

According to the individual who brought this incident to my attention:

Wesley Swilling was shot and killed in the law enforcement center parking lot in Greenville, South Carolina on the morning (3am) of January 14, 2013. The officer and deputy who were in the lot who encountered him have said that Swilling aggressively advanced on them in a threatening manner, screaming “I will kill you” and brandishing what they believed to be a weapon. They said they shot at him, striking him; he fell and that he got up and continued to advance on them.

The ‘weapon’ was later identified as a modified hot glue gun. They shot at him 24 times, striking and killing him. Seven shots hit him including shots to his back, meaning he had his back to them. Twenty-two shots were fired by the deputy.

The police departments cleared their officers, and earlier this week SLED (SC Law Enforcement Division) also said no charges would be pressed. This video was released on March 15:

Anyone who watches the video will see Wesley walking in the parking lot, get shot, fall down, attempt to get up and then walk/stumble towards the guardrail. In no way does he appear to ‘get up and continue advancing on the officers’ and I don’t see how he could possibly be doing so with that injury.

And that aside, at what point did the officers realize he had no weapon? They continued to shoot. One officer, deputy Frank Abella, fired 22 times.

Regardless of why Wes was there, the excessive force by the officers was not justified. It comes down to being their word against a man who can no longer speak for himself.

I encouraged the author of that text above to connect with those active in Carolinas CopBlock.

I find it interesting that the video wasn’t made public until after the “investigations” have been completed. Convenient for “the authorities” who tasked themselves with determining if their friends acted in the wrong. If they are really transparent then why not make all related evidence available immediately?

This incident – in which a man’s life was extinguished – was apparently not thought to be important enough for those involved to do a press release. Might that have been different if the person killed had worn a badge?

Ultimately, what Swilling is said to have done was throw a baseball and point a glue gun. I’d guess Abella and his comrade were more apt to shoot as they knew there’d likely be little personal ramification if they were in the wrong.

Swilling’s friends have set-up a Memorial and Tribute

If someone with a badge had been shot might the shooters name been shared? Why is that not the case for Swilling’s unnamed shooter? I’d guess, in addition to the name being shared, so too would a home address and past claims of acting in the wrong (a “criminal” record, though many acts that are said to fall under the label don’t cause victims thus doesn’t prove a person to be bad). Why didn’t the same happen for the two shooters? What might their past reveal? Have they been involved in other shootings? Do complaints about their actions to those they purport to “serve” exist? Is there a pattern to consider? Is this shooting just the latest iteration of a history of double-standards allowed-for?

In Solicitor clears officers in shooting, by David Dykes and Ron Barnett, posted to GreenvilleOnline.com on March 13, 2013:

Greenville County’s top prosecutor said police officers didn’t use unreasonable force in firing 24 shots at a man and killing him when he threatened the officers at the Law Enforcement Center. . .

He described the shooting as “a very tragic situation.”

He said the action taken by officers “was reasonable under the circumstances at that time.”

The article continued to accept claims put-forth by the “top prosecutor” Walt Wilkins, by pointing-out that the conclusion he reached was the same as other “authorities”, namely, Terri Wilfong (the head of the police outfit) and one of the spokespeople of Steve Loftis (the head of the sheriff outfit).

The “officials” at SLED claim to have conducted “an extremely thorough investigation”, but should we be surprised when investigations done by individuals close to the shooters are not thorough?

I wonder if Riddle is satisfied when reporting that “investigations” done surrounding shootings are done in-house – isn’t the inherent lack of transparency evident in such a scenario!?

Perhaps one should be satisfied that some dissent to the “official” truth was acknowledged to exist, but as tends to be the norm, rebuttal to those stated concerns by “authorities” are included whereas the inverse is not true.

At least Riddle included in the piece a thought-provoking statement by Swilling’s mom:

In the Swilling shooting, a city policeman was confronted by a man in a dark parking lot at the LEC around 3 a.m. The coroner’s report says Swilling threw a baseball at the officer and then advanced in a threatening manner. Deputy Frank Abella fired 22 rounds from his Glock service weapon, reloading once, Loftis said. A Greenville police officer, who has not been identified, fired twice, Wilfong said. Swilling was hit seven times.

His mother, Bonnie Goin, questioned why so many rounds were fired.

“Could they not tell there was no return fire?” she said.

It was pointed-out that the video surveillance footage from SLED that documents the January 14, 2013 incident with Swilling was not in true chronological order. The video begins not at the beginning of the encounter but with a scene that happened later (of Swilling before he was shot). Was that purposefully done to make more-likely viewers unaware arriving at a desired conclusion?

Keep in mind the fact that Swilling was shot at two dozen times. He was struck seven times, including three rounds in his back. And There is no claim that Swilling ever returned fire, or even fired one shot – he couldn’t – he didn’t have a firearm! In fact, Swilling was walking away from the shooters when the fatal shots were received.

Ask yourself  – might this situation have been handled different – the investigation, the amount of attention paid by “the authorities” (and the area media) if the situation would have been reversed? Would a claim of being in fear have been accepted without question?

Memorial and Tribute for Wes Swilling page on GoFundMe.com

Wesley Kyle Swilling on January 14, 2013 by Clyde Freeman at InnocentDown.com

Family of Mauldin Man Killed by Officers Plans Lawsuit by Hal Millard on February 13, 2013 at Simpsonville.Patch.com

Police: 1 killed in shooting at law enforcement center by Stefanie Quaal and Casey Vaughn on February 14, 2013 at FoxCarolina.com

ALL THE DOCUMENTS ABOVE SAVED TO “WESLEY SWILLING” COLLECTION AT SCRIBD.COM/COPBLOCK

A close friend of Swilling’s shared this paragraph:

Only Wesley for sure can say how he wound up in the parking lot of the Law Enforcement Center on that morning in January but dealing with frightening situations is not something that should be startling to a police force. To guess at his mental state or how he ended up there is speculation. Bottom line: Wesley carried no weapon, never fired a shot, yet had 24 shots fired at him in a matter of a few minutes, including shots that went through his back, indicating that he was retreating. Wesley Swilling was a tall, powerfully-built, athletic individual. What would have happened in the same scenario had the person in the parking lot been a petite female? Or an elderly person? The instinct of fear seems to have played an enormous role in how the situation played out. The case was investigated and cleared by the very departments it involved, who also took lengthy amounts of time to release information and to put out a video to media that was actually looped, not showing events in the correct order.

No alcohol or drugs were found in Swilling’s system.

Hal Millard, who, at least four times before, has covered the shooting death of Swilling at Simpsonville.Patch.com, published this post – Group Releases Video Questioning Swilling’s Death, which included this excerpt:

In the past several weeks, the police watchdog group, Cop Block, has taken up the killing of Swilling, who was shot numerous times by a Greenville County Sheriff’s deputy and Greenville Police officer outside the county Law Enforcement Center on Jan. 14.

Swilling, 31, was shot at 24 times. Seven of those shots, including a few to the back, hit him and eventually killed him. A March 17 post on Cop Block questions the manner of the shooting and the way its aftermath was handled by law enforcement. The group also is critical of the local media’s reporting of the case.