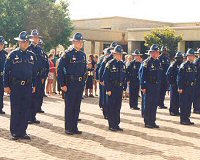 Dana Nutter submitted the following story from his blog via CopBlock.org’s ‘submit‘ tab.

Yesterday, after a long week of “vacation” (more of a scouting mission to relocate) in Texas, I woke up at my hotel in Shreveport where I stopped the night before for some sleep, because it was late and I was too tired to drive. I got on I-20 and started heading East for my long drive home (10.5 hours according to Google). Roughly 30 minutes into my long trip, I saw blue lights in the mirror so I pulled over and got my wallet out, waiting. A Louisiana State Trooper came to my window and said I was hugging the line and asked for my license and insurance card.

Okay, I was, because it was still dark and that was the easier reference point to drive on, but that’s not what the story is about. Before walking off, he told me to get out of the car and stand by the back, so I complied. He ran his usual checks, and returned a few minutes later to hand me back my insurance card and inform me he was not going to write me any ticket. He then went off on some spiel about drugs and illegal weapons being transported (two things I couldn’t care less about) on I-20, then asked to search my car. Well, as a believer in freedom and someone who doesn’t want anyone going through my stuff, nor did I want be delayed on what was to be a long trip, I exercised my “right” to say “no.”

Now technically, that should have been the end of the story, leaving me on my way, but it wasn’t. I was then told to stand near the front of his SUV, within camera view. After a while, the cold was getting to me so he let me get a jacket out of my car, but I was still being detained. He kept asking questions about carrying anything illegal in the car, which I denied simply because it was true. I wasn’t carrying anything illegal. I did have a couple guns locked up securely in the trunk that I mentioned, but emphasized they were locked up safe. He next informed me I had to wait while they brought a canine unit to sniff around my car, claiming this was perfectly legal.

Well, maybe it is, but what about detaining me for no reason? Let’s face it, I wasn’t pulled over because of my driving. I was most likely profiled. They see a car with an out-of-state tag and think it’s good for a possible drug bust, so they pull it over and look for an excuse to search it, then an excuse to confiscate the car, as asset-forfeiture laws are making this a much more profitable scam than just operating traditional speed traps. (I was stopped again and ticketed at a speed trap, about 2 hours later. After bitching to him about his comrades, he was very quick to write a ticket and send me away.)
Finally, the canine unit came. I told them they wouldn’t find anything, so they gave me my license back and let me go as if they were doing me some kind of favor.

Even though they found nothing, I, as a peaceful traveler wanting nothing more than to make my way home, was held for about 30 minutes and subjected to the outside cold when I could have been comfortably driving along in my heated car. This is the world we now live in: the police state of the U.S.S.A. Don’t think this, or something worse, couldn’t happen to you!