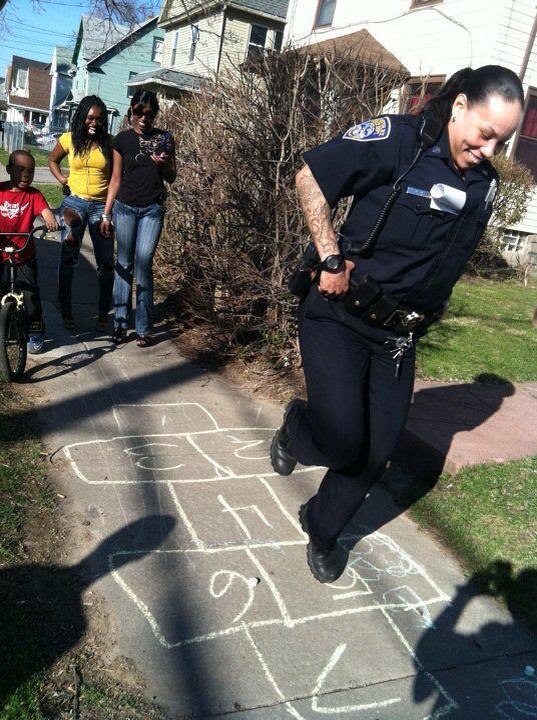 Since April of 2012, when he announced his billboard campaign, Rochester, NY Police Chief James Sheppard has been desperately trying to win the community’s trust, and respect.

First, it was the billboards.

Strategically placed in areas of the city where there is a high concentration of Americans and Latinos, the billboards feature paid minority actors “photo-shopped” standing next to actual minority Rochester, NY Police officers, with the slogans “We’ve Got Your Back” and “On the Same Team.”

When that didn’t work, Chief Sheppard tried several other attempts.

He came up with several cop and kids outings, such as “Fish with a Cop”, where Rochester Police officers took a few inner city kids fishing on the banks of the dirty Genesee river, and “Skate with a Cop”, where officers went bmx bike riding and skateboarding with a few kids in an indoor skatepark.

When that didn’t work, Chief Sheppard turned what he called “twitter town hall”, where every Tuesday in January, for one hour, the Chief would be available questions, and concerns from citizens, of course Chief Sheppard made sure to selectively pick and choose which questions, or concerns he would respond to.

When that didn’t work, Chief Sheppard announced the Rochester, NY Police department Facebook page, which has turned out to be another dud.

It was that last move by Chief Sheppard which prompted me to create my own Facebook page, “Rochester, NY Police Department Exposed.”

The page, which I officially launched on March 2, 2013, exposes the misconduct, corruption, and questionable activity by Rochester, NY Police officers, which the RPD, and the City of Rochester don’t want taxpayers to see.

The response to the page has been overwhelming, with just over 1.5 million views in less than a month.

Even though the page is essentially about exposing dirty cops, I have no problem featuring the few Rochester Police officers who seem to really care about the community they have sworn to “serve and protect.”

After I posted the photo to the right, which shows officer Pitts playing hopscotch with youth on a city sidewalk, the response has been amazing.

Comments such as “That’s how it use to be back in the day’s, when the police in the was a part of the community. Not looking at us like we are criminals!”, or “Can we clone her about….. 5000 times. Plz.”

I think Rochester, NY Police officer Kaela Pitts, represents for the community, what we want and need.

Officers who use their authority to make a positive difference in the lives of youth.

Not profile or abuse them.

I know for me, seeing this photo reminded me of a much happier time in my life.

A time where I was taught to respect police officers.

A time where I was taught that police officers were your friend, and that they were they to help you.

Like that time in second grade when “officer Friendly” from the Rochester, NY Police department visited our classroom at Jonathan Child #21 School.

A time when I would sit on my porch and Rochester, NY police officer Ron Fontaine, a great man, and an even greater police officer, would stop his cruiser in front of my house on Child Street, just to say hi to me.

So you see Chief Sheppard, with all your desperate, failed attempts to win the community’s trust and respect, through billboards, outings, twitter and even Facebook, the answer is simple.

You need to get rid of the dirty, corrupt, rogue, racist cops on your force, and hire more officers like RPD officer Kaela Pitts!

“Rochester, NY Police Department Exposed!” by clicking the link below