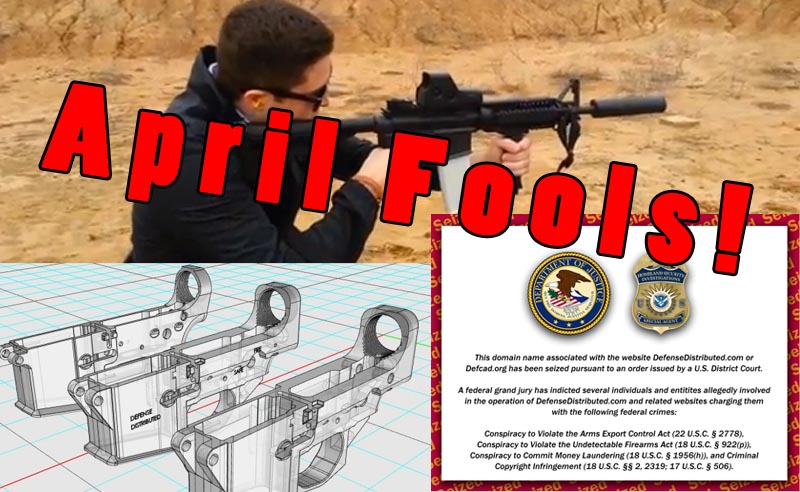 I pinged my bud who’s active with Liberty Web Alliance. He responded with this more-thorough response:

The DNS appears to still be correctly running through cloudflare and the image shown on the homepage is hosted on the DefCad hosting.

While DNS can take a while to propagate, you would be seeing the old site if you were seeing old DNS.

After checking with a friend at Liberty Web Alliance, which has as a member DefenseDistributed.com, it seems certain that folks active with DOJ have NOT taken the websites of Defense Distributed offline.

The image on the homepage of both sites was uploaded by the Defense Distributed team, likely as a way to garner attention to their efforts and make a point – that such an outcome – the censoring the information they share – isn’t beyond reality, which should underscore the need for us all to be even more vigilant now, as it’ll only become more difficult tomorrow or next year.

Last week Vice released a 24-min segment (below) on Defense Distributed – an Austin, Texas-based endeavor that sought to make open source files for 3D printers to create firearm components, in essence, bypassing any top-down control on the ability of individuals to possess tools to protect themselves.

From the FAQ previously accessible at Defense Distributed:

If we truly believe information should be free, that the Internet is the last bastion of freedom and knowledge, and that societies that share are superior to societies that censor and withhold, then why not guns?

Freedom of information has material, decentralizing consequences. And this is a good thing.

… Every judicially protected civil liberty can be abused. That protection, that abuse, has real social cost. But is degree of social cost the calculus for protecting civil rights? That is absurd. When we say universal access to the firearm, we mean it.

I say “previously” as individuals working at the Department of (in)Justice have on April 1, 2013 blocked the websites DefCad.org and DefenseDistributed.com: What right do these strangers have to censor the free flow of information? To “seize” a website from those who haven’t harmed person or property?

I doubt it’ll be long until the files created and shared by the folks at Defense Distributed are found elsewhere on the web or become accessible via Tor. Such is the nature of the world in which we now live – information simply can no longer be censored by those trying to control others. If you know of the location of such files please leave the information as a comment so they can be downloaded/mirrored by others.

Note that DefenseDistributed.com is a member of Liberty Web Alliance, who host CopBlock.org, as well as a number of Cop Block offshoots.