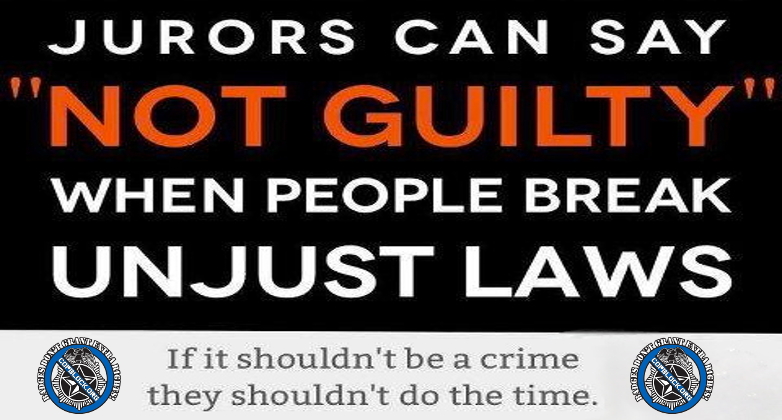 The following post was shared with the CopBlock Network by Captain Six, via the CopBlock.org Submissions Page. It was originally published at the website Station.6.Underground under the title “What is Jury Nullification.”

What is Jury Nullification?

What is Jury Nullification? You won’t find it defined in your dictionary or described in your encyclopedia. You weren’t taught about it in school, and indeed it is even considered a crime to tell other people about it in some circumstances. Imagine that for a moment – it is a crime to inform a citizen as to their right, even the scope of their duty while serving on a jury.

According to the Wikipedia entry:

Jury nullification is a constitutional doctrine which allows juries to acquit criminal defendants who are technically guilty, but who do not deserve punishment. It occurs in a trial when a jury reaches a verdict contrary to the judge’s instructions as to the law.

A jury verdict contrary to the letter of the law pertains only to the particular case before it. If a pattern of acquittals develops, however, in response to repeated attempts to prosecute a statutory offence, this can have the de facto effect of invalidating the statute. A pattern of jury nullification may indicate public opposition to an unwanted legislative enactment…

Most Americans have never even heard of such a doctrine. Thanks to numerous TV shows and real-life judges telling us that the only function of the jury is to render a decision based strictly upon the facts of the case, a key tenet of the justice system envisioned by the Founding Fathers has been lost. You see, it is not only the job of the jury to weigh guilt or innocence against the letter of the law, but also to judge the just nature of the statutes themselves. In this way, The People ultimately retain power over the government, rather than the government dictating to The People what is and what is not justice. This tenet is instrumental in protecting ourselves, as The People, from tyrannical laws and cronyism. This is why we have a jury system in the first place, not simply to act as a cog in the wheel of the justice system, but to be the justice in the system.

Let us imagine for a moment, that you live in a city where the Mayor makes soda-pop illegal. So illegal that he actually signs into law a criminal statute that makes it a jailable offense to dispense soda-pop. He makes a public campaign to warn about the evils of soda-pop, how detrimental it is to your health, while being crowned king of national doughnut day, and holding a vast amount stock in the city’s number-one importer of iced-tea.

Now let us imagine that you are sitting on the jury for a criminal trial of a single-mom arrested for selling soda-pop to her neighbor, which had been “smuggled” in from outside of the city limits, and that the transaction was captured on an audio-video recording by police. You see that she is plainly guilty of violating the law, technically, but can’t in good-conscience send her off to jail for a year. You, and other jury members voice that dilemma to the judge, who then instructs you to render a verdict based strictly on the facts of the case, the evidence presented, and that all other considerations have no bearing on your duty to render a verdict. What do you do? It appears that you have no choice, and you find her guilty.

But if you had actually been a FULLY INFORMED JUROR, rather than just listening to the instructions of the judge who owed his career to the Mayor, you would have known that you did have an alternative. That it was not actually illegal for you to ignore the judge’s instructions, and that you could have rendered a verdict based on your conscience rather than a law in a book. You would have known that Jury Nullification not only gives you this right, but that it is your duty as a juror to render your verdict in such a manner. In this way, you see, not only have you protected the accused from overzealous and tyrannical prosecution, but you have also struck a blow against cronyism. Cronyism by the Mayor who stands to make a profit from the law he made, in relation to the company stocks he owns and the companies that own him. Cronyism by police and prosecutors who turn a profit on the backs of the taxpayers for every arrest and prosecution they make, maintaining their job security and giving the United States the largest prison population in the world in the process. 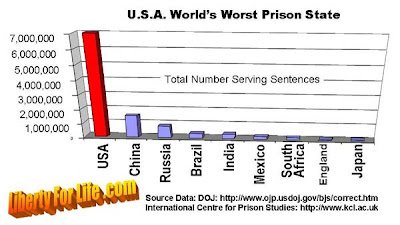 Maybe that’s why the principle of Jury Nullification is the most taboo subject in our justice system today, and has been continually eroded in landmark decisions by the courts since 1895, as time has distanced us from the core principles of liberty on which this nation was founded.

In 1794, the case of Georgia v. Brailsford was being heard before the Supreme Court of the United States (SCOTUS). The court’s first Chief Justice, John Jay, established precedent that the Common Law practice of Jury Nullification was valid in the United States. He wrote, in part…

“It may not be amiss, here, Gentlemen, to remind you of the good old
rule, that on questions of fact, it is the province of the jury, on
questions of law, it is the province of the court to decide. But it must
be observed that by the same law, which recognizes this reasonable
distribution of jurisdiction, you have nevertheless a right to take upon
yourselves to judge of both, and to determine the law as well as the fact in controversy. On this, and on every other occasion, however, we
have no doubt, you will pay that respect, which is due to the opinion of
the court: For, as on the one hand, it is presumed, that juries are the
best judges of facts; it is, on the other hand, presumbable, that the
court are the best judges of the law. But still both objects are
lawfully, within your power of decision.”

That precedent held, unmolested, for 99 years. Prior to the Civil War, the Fugitive Slave Act made it a Federal Crime to help escaped slaves, but jury nullification was instrumental in undermining that law and bringing an end to slavery America. Jurors refused to render a guilty verdict against those who had helped escaped slaves. But in 1895, the Supreme Court of the United States struck it’s first blow against the Common Law principle of Jury Nullification. In Sparf v. United States, SCOTUS held in a 5-4 decision that federal judges were not required to inform jurors of their inherent right to judge the law in a case.

In the 1969, the Fourth Circuit upheld in the case of U.S. v. Moylan that a court could refuse to allow instruction to a jury regarding nullification, yet hypocritically upheld the juror’s inherent right to nullify. In other words, they were denying the right of the juror to be informed of their right, while still maintaining the validity of Jury Nullification stating,

“If the jury feels the law is unjust, we recognize the undisputed power of
the jury to acquit.”

In the 1972 case of United States v Dougherty  the U.S. Court of Appeals for the District of Columbia Circuit maintained that the courts could deny the defense a chance to instruct a jury on their right to nullify.

In 1988, in U.S. v. Krzyske, the jury asked the judge about jury nullification. The judge responded “There is no such thing as valid jury nullification.” The jury convicted the defendant, and the judge’s answer was upheld on appeal. Another judge did dissent however, and cited United States v. Wilson, 629 F. 2d 439 – Court of Appeals, 6th Circuit 1980, that the panel had unanimously decided “In criminal cases, a jury is entitled to acquit the defendant because it has no sympathy for the government’s position.”

In 1997, the Second Circuit ruled that jurors can be removed if there is evidence that they intend to nullify the law, under Federal Rules of Criminal Procedure 23(b). There have even been instances of jurors being removed and mistrials declared after informed-jury activists distributed literature near courthouses.

Now here’s one final gut-check for the uninformed public. We often assume that it is the job of the defense attorney to defend their client to the best of their ability, with all of the knowledge at their disposal. This is not true, however. Attorneys, including defense attorneys, are an Officer of the Court. This means that their first duty is to the law, and not their client. With a sworn oath to uphold the law, they are forbidden from advocating jury nullification. Your lawyer works for the court, not you.

If you ever sit on a jury, remember one important fact. You do not work for the court.

A History of Jury Nullification