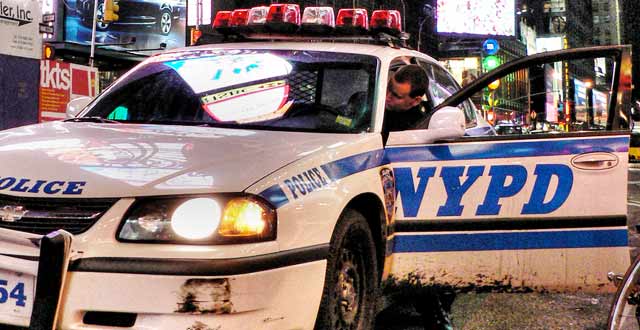 On April 2, 2013, OpposingViews.com reported on an incident where individuals working as part of the NYPD showed a truly sickening display of disregard for other human beings. “Thugs” is the most accurate description for NYPD Officers Maripily Clase, Suranjit Dey and Jermaine Hodge. -Kate

The New York Police Department (NYPD) is being sued by a woman who claims officers pepper-sprayed her entire family, including a 5-month-old baby and a 2-year-old child.

Marilyn Taylor said officers stopped her and her husband in the subway on Aug. 9, accusing them of not paying the fare. According to the lawsuit obtained by Courthouse News Service, Taylor claims NYPD Officers Maripily Clase, Suranjit Dey and Jermaine Hodge then overreacted to her pushing her 2-year-old through a service door, rather than using the turnstile, on her way to a Manhattan-bound L train.

At the time, Taylor was pushing her 2-year-old in a stroller and holding her 4-year-old’s hand. Her husband carried their 5-month-old close to his chest. When questioned by police, the suit claims, “the aggressiveness of the officers’ demeanors had upset the four-year-old daughter, and her mother bent down to console her and tell her, ‘everything will be OK.’”

That’s when Officer Dey allegedly pepper-sprayed Taylor, who nearly fell from the platform. The spray affected the entire family.

“The pepper-spray caused the children to scream out and choked the two-year old, who went into fits of vomiting,” reads the lawsuit. “Ms. Taylor was then placed in handcuffs as the minor children cried in fear and pain.”

The complaint also states that the officers handcuffed Taylor and pushed her so hard down the stairs that it bruised her wrists and back.

After Taylor’s arrest, her husband, Dehaven McClain, took all three children home himself. The family sought medical attention because of the incident.

“After the attack, mother and father suffered ongoing eye injuries and all three children suffer emotional harms, and are now afraid to ride the subways and become afraid when they see police officers,” the lawsuit states.

“The four year-old cried herself to sleep for weeks, and after the incident the two-year-old began waking up in the night crying for her mother.”

In court the following day, Taylor was given an adjournment in contemplation of a dismissal, which would remove all charges if she stayed out of trouble for a certain amount time.

230
SHARES
FacebookTwitterGoogleRedditTumblr
DiggLinkedinStumbleuponMailPrint
You Can Support Cop Block by shoppping on Amazon using the banner below:
BANNERS ARE CLICKABLE