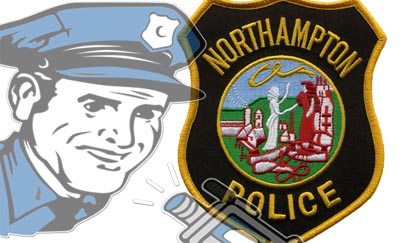 Twenty-six-year-old Jonas Correia was outside Tully O’Reilly’s, a bar in Northampton, a college town in western Massachusetts. Using his cellphone, Correia filmed the actions of Northampton police employees who were at the bar to remove someone for allegedly hitting a bartender in the throat. Correia wasn’t interfering. He was filming. Yet he was was aggressively approached – at least two wearing “Northampton PD” badged barked explicative-laden threats, then less than five-seconds later, Correia was maced by Alan Borowski, tackled, handcuffed, caged, and is now threatened with the catch-alls of disorderly and resisting.

Fortunately the incident was captured by a Rachel Rothman, who happens to be a lawyer. Despite that objective evidence, double-standards have been afforded and the thin blue line maintained.

We’re heading to Northampton to do some Copblocking.

Join us in Northampton, Friday, April 12th. It will send a message to the Northampton police employees that macing someone for filming won’t be tolerated. Stand with Correia, we’ll all be safer because of it.

6:00pm – 7:00pm – Local Burger (16 Main St., Northampton) – we’ll be getting acquainted, going over scenarios, sharing contact info as needed, and generally just making sure we stay as safe and have as big an impact as possible.

7:00pm –  we’ll hit the streets of Northampton and will continue to have a presence in town as long as folks have interest. We’ll work to document police interactions we witness and will do outreach to those we pass. Depending on comfort level and the type of camera had, some can hang back and film from afar, while others can be closer.

You can attend one or both of the components based on your interest and time.

For Correia the fact that a bystander filmed the incident has brought it to the attention of tens of thousands of others, some who have made calls, and some who I hope will join us on Friday, April 12th in Northampton.

Folks wearing badges can no longer set the reality. Lies on a police report can’t stand up to the disinfecting light of transparency. We saw that in Austin, when video captured by a bystander vindicated Antonio Buehler.

Correia is slated to have pre-trial on May 16th.

Who will be the first Northampton police employee to vocalize to others what they know internally to be true – that Borowski acted in the wrong when he went after Correia?

If you join us, bring your camera. And be sure it’s charged. Each additional person filming will act as another layer of protection.

If you have a smartphone visit CopBlock.org/Apps

Some of us present will be communicating via handheld marine band radios. We’ll decide on the channel once we are in Northampton and locate a channel free from other traffic.

If you have the time, you may want to review the document Copblocking 101 and the video below

Note that we’re going to attempt to connect with Jonas Correia and Rachel Rothman. It’d be great if they could join. Also, we’ll be doing outreach to some potentially like-minded student organizations at Smith College and through other outlets to get the pending Copblocking on the radar of more people. Updates will be posted here. If you have ideas you think we should pursue please do share them here.

Today calls were made and a voicemail was left with Jonas Correia and Rachel Rothman, thanking them for their actions and informing them that some supporters will be in town on Friday, April 12th. Both Correia and Rothman were invited to attend one or both of the scheduled components. We hope to hear back and connect with them in-person.

Rothman confirmed that she will be present on Friday, April 12th.

We’ll beat Local Burger from 6:00 – 7:00pm on Friday, April 12th. This location was chosen as its pretty central and should have ample space for a small group of folks to meetup.

Stand with Jonas Correia: Join Us in Copblocking Northampton

6:00pm – 7:00pm – Local Burger (16 Main St., Northampton) – we’ll be getting acquainted, going over scenarios, sharing contact info as needed, and generally just making sure we stay as safe and have as big an impact as possible.

7:00pm –  ? –  the streets of Northampton – We’ll work to document police interactions and will do outreach to those we pass. More info at: CopBlock.org/Copblocking101 &CopBlock.org/Flyers & CopBlock.org/KnowYourRights