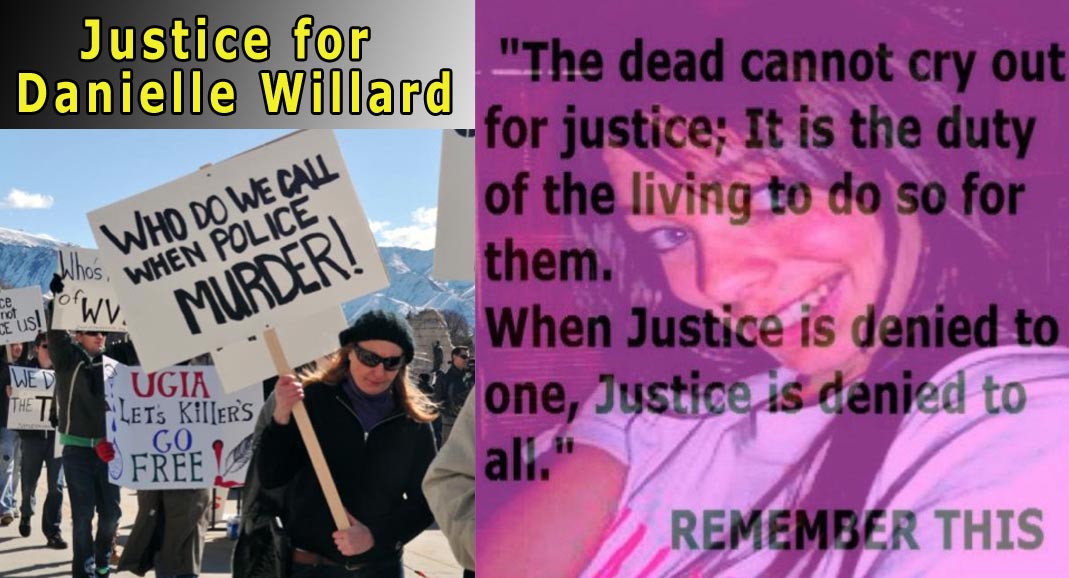 In November Danielle Willard was murdered by a police employee(s) of West Valley City, Utah. Kelly Patterson, who covered this situation at Nevada Cop Block, noted:

There’s been three vigils held to call for accountability in the killing of Danielle Willard yet the police employees remain mute. One of the more-recent updates made to the Facebook page Justice for Danielle Willard notes:

Ok, Here we are exactly 5 months later. What do know know. We know the names of the ____ that shot Danielle. We know that 19 cases have been dropped because of something that one of these guys did. Not sure what that is. We have a retired Police Chief, A dead police offices ( mysterious by the way). We know that the ___ have attorneys. We know quite a bit about them but we still don`t really know what happened to Danielle. If you want to believe what was put out by the WVPD, Well good for you, you, you have your answer. Well I was told so many different stories by the WVPD detectives that I don`t believe one word of it. If you have lied to me once you have lost all of my faith of anything you (they) say. I know Danielle.

Who, employed at the West Valley City police will be the first to speak out? Or to share information with those related to Willard? For a third time since she was killed almost three months ago, friends, family, and concerned residents will be gathering outside the West Valley, Utah police station to demand answers.  This protest is scheduled for January 22nd, which would have been Danielle’s 22nd birthday. Instead it has become a grim reminder of death November 2nd 2012 at the hands of detectives working for the West Valley Police Department, which is located in the Salt Lake City area.

Please join us on 1/22 at 3:00 pm as we gather together in honor of Danielle Willard and celebrate her birthday she would have been 22. West Valley Police shot and killed Danielle on Nov 2nd while she sat in her car unarmed and still have refused to give any sort of explanation as to why.

In spite of the two previous protests and considerable questions being raised about why a physically small, unarmed young woman was shot, police have been extremely secretive about any of the reasons or justifications behind the case. More information regarding the circumstances surrounding her death can be found in this previous post here on NVCopBlock.org: Why was Danielle Willard Murdered by Utah Police?

Why was Danielle Willard Murdered by Utah Police?
by Kelly Patterson at NVCopBlock.org A rally will be held Saturday, December 1st at the West Valley Police station, which is located within the Salt Lake City area (see end of post for a map), to demand justice for Danielle Willard. Also, a second protest and candlelight vigil be held at the same location Sunday, December 16th. Danielle’s death and the many unanswered questions surrounding it have left her family, friends, and supporters frustrated, saddened and angry.

In addition, the handling of it all by local police has made many people not just in Utah, but all across the country, question how and why such a small, unarmed woman barely out of her teens with no known history of violent behavior ended up becoming the latest in a growing list of “collateral damage” from the government’s disastrous War on Drugs.

Almost a month ago, on Nov. 2, 2012, Danielle Willard was shot and killed by undercover police working for the West Valley, Utah police department. Apparently, she was killed during an attempted drug bust, although even that is a bit speculative at this point because police have yet to confirm much of anything about what happened that day.

“The family of a 21-year-old woman killed in an officer-involved shooting yesterday await answers in her death. So far, there are still a lot of unanswered questions about the shooting at this apartment complex.

We still don’t know why officers shot and killed Danielle Willard. Her family says, she wasn’t a violent person but drugs may have been her downfall.

Willard’s mother, who lives in Vancouver, Washington, is anxious for information to come out.

“Everything that keeps going through my mind is speculation,” said Melissa Kennedy. “Did she get back on drugs? Was she really clean? Was it the wrong place at the wrong time?”

Willard was shot Friday and killed by undercover officers in the parking lot of an apartment complex in West Valley. Police used white sheets to cover her body from public view. Authorities aren’t saying what led to the shooting.” Those family and friends are understandably questioning that silence, especially since police normally have no problem releasing information that supports their officers’ version of events. Without any of that information, they are left to try and make sense of why police would need to kill Danielle, which is hard to reconcile with their own memories of her:

‘…Danielle is a sweetheart. She’s got a big heart. She would give the clothes off her back for anybody. I used to get mad at her because she would use so much gas in our car because someone would want a ride home. She couldn’t tell them no,’ Kennedy said…

‘…She’s never been known to be a violent person. She’s 100 pounds soaking wet. She’s only 21 years old. She’s a tiny little thing. What could she possibly have done, other than having a gun, what could she have done to provoke them to shoot her?…I’ve never ever known her to keep a gun with her or anywhere around here,’ Kennedy said…

‘…Kayleen (Willard) said she admired her older sister.’I always wanted to be like her. She always inspired me, because she was always so happy. She always seemed to be the crowd pleaser. She always seemed to brighten up a room,’ Willard said. ‘She was an inspiration to me, she made me be the person I am today. She made me want to be a better person growing up. She will always be in my thoughts and my heart, and she’s in a better place right now and I’ll see her again some day.’”

In spite of the silent treatment from West Valley police, some details about that day have gotten out. As might be expected, those details don’t paint the undercover cops that killed Danielle in a very good light. Based on independent witnesses that have come forward and the limited admissions that detectives assigned to the case have made themselves several things have been established: The every day abuses and unintended negative consequences of the War on Drugs, as well as the selective nature of that war, should be enough to cause outrage at the unnecessary death of yet another person whose only real “crime” was an act which by itself only harms the person committing that act. No matter what your stance on drug use and its effect on those who become addicted, it should be apparent that the harm caused by drug prohibitions far outweigh any positive effects of such policies.

There are several ways that you can help seek justice for Danielle:

If you are in or have the ability to travel to West Valley, Ut., join those who will be there at the rallies to support them as they demand that justice in person. Other options to contribute from a distance include donating funds to offset funeral costs and the costs of traveling from Washington, where her family lives, to Utah. This is the link to do that via an online fundraiser. Yet another option is to call the West Valley Police Department at (801) 963-3300 or  (801) 965-5155 and let them know that you want justice for Danielle.