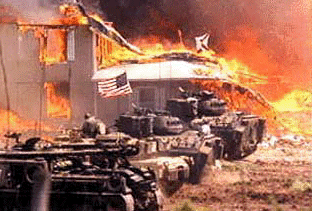 Two decades ago individuals living on the outskirts of Waco, TX were targeted and slaughtered by others wearing ATF and FBI badges. The aggressors were never held accountable.

Why is this important now? Both to remember those slain and to underscore that this is what not just what may happen, but what will happen, when a “legitimate right” to initiate force is allowed for. Especially in light of actions taken by those who claim to “protect” us – massive purchases of ammo and armored vehicles, invasive surveillance, and the classification of anyone asking questions as a “domestic terrorist”, just to name a few.

The document below, posted to the Facebook page Remember Waco, is shared here to make more folks aware of the incident and to hopefully help people connect on the ground at the two events scheduled. I’d be present were I in the area. I visited Waco in 2009 when on the road with Motorhome Diaries, an on-the-road project with the tagline “Searching for freedom in America.” The stated reason noted in the video description was, “To inform more people about just what happened there in the spring of 1993 to remind us to be ever vigilant to a tyrannical and unaccountable government.”

For an exhaustive overview watch this documentary, Waco: The Rules of Engagement. It underscores what happens when the same folks who claim to enforce the “rules” are allowed to interpret the rules.