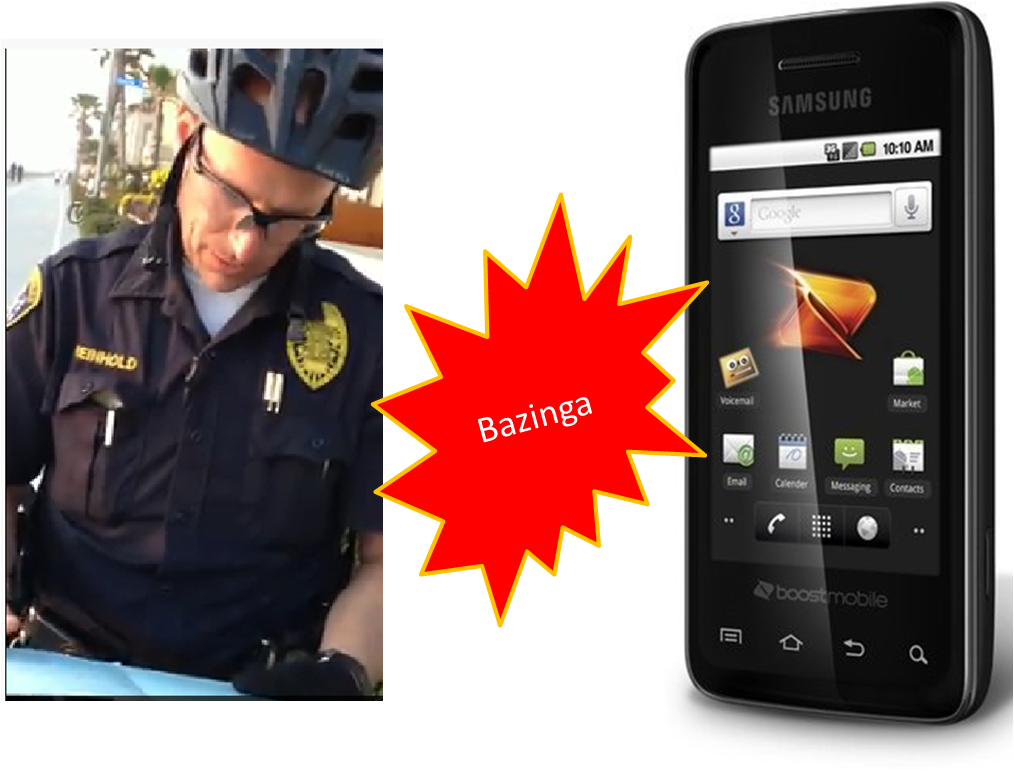 Our good friend over at Photography Is Not A Crime, Carlos Miller, updated a Post recently,

As one views the video, it’s not even until one minute, that the Citing Officer – M. Reinhold – Badge Number 6223, with the San Diego Police Department, noted that the “suspect” was even recording.  His partner, who is shown on the recording as well, was monitoring Mr. Pringle while he was recording the incident from the very beginning.  One would think, that if there was a concern with the Mobile Phone Mr. Pringle had, a Samsung Galaxy, the monitoring partner would have intervened and possible even drawn his weapon, if he had per chance felt, that he, or even his partner were being threatened.

The stop was initiated as Mr. Pringle was unlawfully smoking a cigarette on the Boardwalk.  Of which, Mr. Pringle owns up to:

“It is against the law to smoke cigarettes on the boardwalk, so I admit I was breaking the law,” Pringle said in a telephone interview with Photography is Not a Crime Tuesday.

Once the Mobile Phone was noticed, M. Reinhold asks Mr. Pringle “would you put that away, please?”   Mr. Pringle stated, calmly “No, thank you, I am in a public place I have a right to film this”.  At this point, M. Reinhold states “Let me ask you…you know what actually….” and his demeanor appears to change, and he states the following, “Cell phones can be converted into weapons…look it up online” all while Mr. Pringle states “this is not a weapon, there is no way this is a weapon”.

The discussion goes back and forth until M. Reinhold states “Okay, I’m going to have to take that away from you”, which he proceeds to do and arrests Mr. Pringle.  As seen in this video link.

Now, utilizing the suggested medium, the internet we went to look it up online, there are some quite interesting Cell Phone converted weapons, all of which I’m sure M. Reinhold was concerned about, while his partner, must have been unaware(s): At 1:50 in the above video link, M. Reinhold states, “if he would have just given the phone, let me look at it, isn’t that a reasonable thing to do?”

M. Reinhold: “I didn’t know for sure…if you look it up online, cell phones can be converted into firearms and tazers, look it up online there is video of how to do it… so if someone is going to stand within a couple of feet of me, and film me, I’m gonna need to look at that cell phone and make sure it’s not a weapon…”

i.e., a mobile phone used to record interaction with the police, is an officer safety issue, which trumps the 4th amendment.   One might questions, if that’s the concern, why his partner did not intervene sooner, and secondly why did he not immediately subdue the subject under “officer safety” considerations, rather than debate with him for 40 seconds prior to slapping the cell phone away?

In the James Bond/Laura Croft worlds, one could be rightly concerned with a Cell Phone gun, however citing Mr. Pringle for “Smoking on the boardwalk”, we don’t believe that’s justifiable under “Officer Safety”.

Although cell phone guns are real, I could find no reports of the devices actually being used in major crimes such as attempted hijackings or terrorist activities. However, there have been several reports of cell phone guns being seized from criminals in Europe.

The concept of disguising guns as everyday items is actually nothing new. For many years, guns and other weapons have been disguised to look like pens, calculators, cameras, canes and a number of other commonplace objects.

Now, following M. Reinhold’s logic, an Officer may feel threatened by a myriad of items as one travels down the street:

Mr. Pringle’s first hearing on the matter is May 23, 2013 in San Diego.  In the interim, contact the following civic leaders and ascertain their thoughts on the matter.