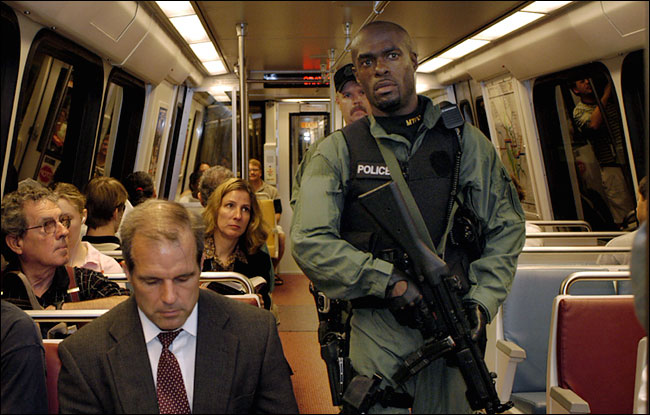 The following was submitted via CopBlock.org’s ‘submit‘ tab.

During evening rush tonight in Arlington, Viriginia, the build up of the massive police state was pretty well known at the ticket gates of the courthouse metro station. Members of the TSA and special units of the DHS were present there, where they have no legal authority. They were assisting police officers of the Washington Metro Transit Authority, who also had no legal justification or authority to be doing what they were doing. K9 teams were also present. Tables were set up for bags and personal belongings to be unlawfully searched by these coward and rogue cops, most of which (TSA and DHS) by our american law and constitution aren’t even supposed to exist, let alone have any law enforcement role in a state like the commonwealth of virginia or any other of our nations 50 states.

It’s totally illegal for Metro transit PD to conduct warrant-less searches, and this illegal checkpoint was also trying to prohibit photography of both the checkpoint and the men and women in uniforms with badges who were conducting the Nazi-Germany-like searches. Under our 1st amendment, photography is allowed anywhere deemed public in america. Being that federal taxes, as well as local taxes, help pay for metro services, you can know the whole metro system is a public space, and anything federal is also public. Under our 4th amendment, it’s against the law for any law enforcement to stop us, ID us, check our things without proper consent or established and articulated probable cause or maybe even a warrant signed by a judge. Our 5th amendment protects us from talking to the police; we do not under any circumstances ever have to answer any question the police may ask us.

The TSA and the DHS teamed up with the metro transit cops tonight in Arlington,Va and set up a huge, unlawful, illegal checkpoint. It’s not the business or authority of any police agency to know who you are, where you live, what you have in your work briefcase or bookbag, etc.If you want to enslave yourself and follow the sheep into the metro station, allowing yourself or belongings to be searched, fine, that is your choice…but you may regret it one day.

“Am I being detained or am I free to go?”

Just ask that one question. Regardless of the answer, if you just want to go on living your day in peace as a law-abiding citizen, someones who’s a paying customer of the WMATA metro system, just walk on by these clowns and get on a train. They have no right, legal basis or any authority to stop you and ask you any questions. They have no right or power to prevent you from paying your fare, making your train on time, and getting home to your family and your dinner and your personal life. The Metro Washington DC area is a disgrace for putting up with this type of tyranny in the capital city of a professed “free society.”