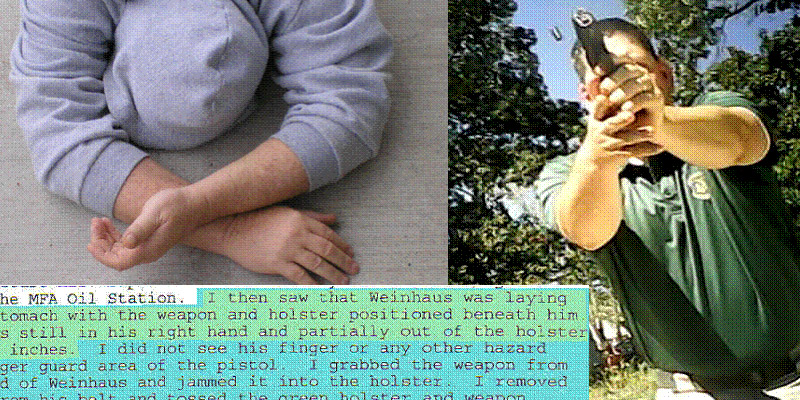 The text and pictures below were shared with Cop Block by a court-accepted forensics expert who has been reviewing the evidence.

For all related information see: http://CopBlock.org/JeffreyWeinhaus

Jeffrey Weinhaus was shot multiple times by Henry Folsom on September 11, 2012. Weinhaus was helivaced from the scene and later recovered. Folsom’s “official” story has been objectively shown to be full of holes. Yet Weinhaus faces eight charges, including seven felonies, and is scheduled for trial on April 30th.

Weinhaus should be freed from his cage, the charges levied against him dropped, and Folsom and his conspirators, be held accountable.

More on this angle from Laura Hausladen:

Background to the post below: Weinhaus didn’t trust Folsom so, in addition to the cell phone in his pocket that, with the help of his ex-wife, was capturing audio from the scene off-site, he also wore a watch with a built-in camera and had a video camera recording from his vehicle.

After being shot, Jeff falls to the ground (face down). The spy watch on his left wrist captured the image below. Though it is only visible in 2 frames, it says volumes.

Jeff was wearing a long-sleeved shirt and slacks. That left only a limited amount of skin exposed. We know that it would be impossible for the watch on top of his left wrist to capture an image of his left hand, and the limited rotation of the wrist would make capturing this image of his face or forehead impossible. That left only one thing…and that one thing is something that we really needed to know. -The image captured is that of Jeff’s right hand.

Here is my simulation. Here’s a close approximation of where Jeff’s arms would have been positioned in order to capture that image. And here’s Folsom right after he fired his first of 4-5 shots just one second before the image of the right hand was captured. That kind of makes this impossible.