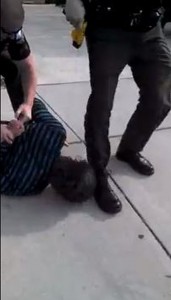 A man was tazed repeatedly and kicked in the head by police while he was in handcuffs in Rehoboth Beach, Delaware. His wife, who was eight and a half months pregnant, watched and recorded the event, begging the police to stop tazing him.

Throughout the disturbing and graphic video, the wife’s voice may be heard begging the three police officers surrounding her husband to let her take him home. She screams “stop tazing him,” and moves in close as an officer she identifies as “Robert Whitman” begins to taze her husband in the face and head, while he’s on the ground in handcuffs. “What is wrong with you?!” the pregnant wife screams as Whitman kicks her husband in the face.

The video, uploaded Thursday, includes in the description that the man, identified as Jeremy, was tazed by police 13 times.