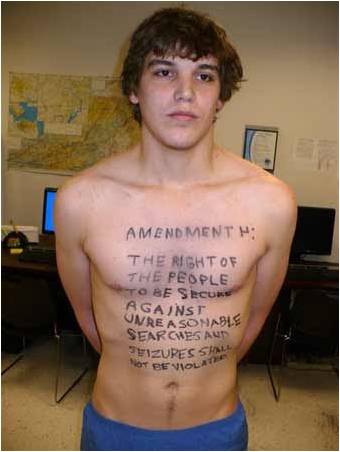 Aaron Tobey who wrote an abbreviated version of the Fourth Amendment on his body and stripped to his shorts at an airport security screening area won a trial Friday in his lawsuit seeking $250,000 in damages for being detained on a disorderly conduct charge.

Mr. Tobey claimed in a civil rights lawsuit that in 2010 he was handcuffed and held for about 90 minutes by the Transportation Security Administration at the Richmond International Airport after he began removing his clothing to display on his chest a magic-marker protest of airport security measures.

“Amendment 4: The right of the people to be secure against unreasonable searches and seizures shall not be violated,” written on his chest.

In sending the case to trial, unless there’s a settlement, the 4th U.S. Circuit Court of Appeals ruled 2-1 and reversed a lower court judge and quoted by Benjamin Franklin.

Aaron Tobey alleges he was retaliated against for exercising his First Amendment rights when at Richmond International Airport (RIC), Transportation Security Administration
(TSA) agents and RIC police seized and arrested him for displaying the text of the Fourth Amendment to the United States Constitution on his chest.

Here, Mr. Tobey engaged in a silent, peaceful protest using the text of our Constitution—he was well within the ambit of First Amendment protections. And while it is tempting to hold that First Amendment rights should acquiesce to national security in this instance, our Forefather Benjamin Franklin warned against such a temptation by opining that those ‘who can give up essential liberty to obtain a little temporary safety, deserve neither liberty nor safety.’ We take heed of his warning and are therefore unwilling to relinquish our First Amendment protections—even in an airport.

Mr. Tobey didn’t want to go through the advanced imaging technology X-ray machines, or so-called nude body scanners, that were cropping up at airports nationwide. Instead, when it was his turn to be screened, he was going to opt for an intrusive pat-down, and removed most of his clothing in the process.

Among other things, the federal lawsuit claimed wrongful detention and a breach of the First Amendment and Fourth Amendment. Tobey was on his way to Wisconsin for his grandmother’s funeral. Despite his detainment, he made his flight.

According to the suit, while under interrogation, the authorities wanted to know “about his affiliation with, or knowledge of, any terrorist organizations, if he had been asked to do what he did by any third party, and what his intentions and goals were.”

Two weeks later, Henrico County prosecutors dropped the misdemeanor charge against him, and he sued the Transportation Security Administration and others.

Had this protest been launched somewhere other than in the security-screening area, we would have a much different case. But Tobey’s antics diverted defendants from their passenger-screening duties for a period, a diversion that nefarious actors could have exploited to dangerous effect. Defendants responded as any passenger would hope they would, summoning local law enforcement to remove Tobey—and the distraction he was creating — from the scene.