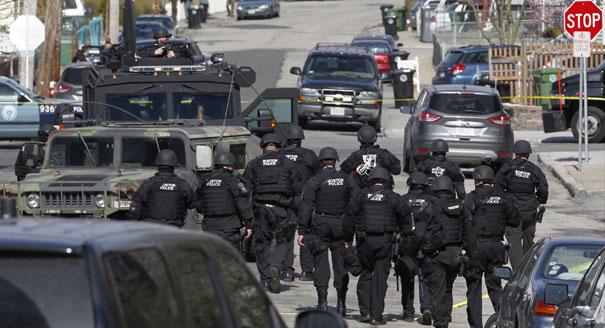 This post is brought to you by Station.6.Underground, via CopBlock.org’s ‘submit‘ tab.

It is being reported that Boston bombing suspect Dzhokhar Tsarnaev was not armed when he was taken into police custody.

This news disproves earlier reports that the suspect may have tried to commit suicide by shooting himself. There were no guns found in the boat where he had been hiding, and he was not carrying any firearms when taken into custody.

The latest reports suggest his wounds may have been inflicted during the initial confrontation with police many hours earlier, but this seems unlikely given the seriousness of those injuries. In this first image we can see that the suspect was able to climb out of the boat where he was hiding, unassisted and without obvious signs of serious injury. 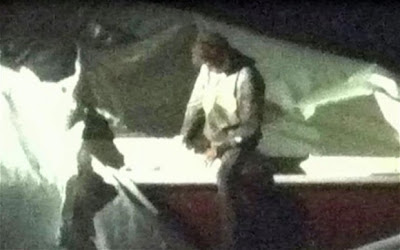 Nevertheless, within moments of surrendering, he was on the ground, possibly unconscious, and being given a tracheotomy. 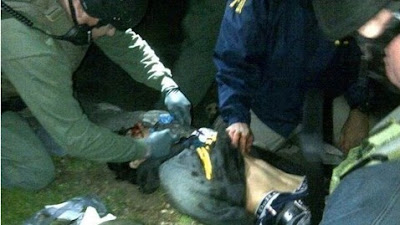 We do know that police opened fire on the unarmed suspect, but no legitimate explanation for that has been given. Aside from the obvious reasons why police are not allowed to shoot or try to kill an unarmed suspect, in this case there was a very clear need to take the suspect alive for questioning. With his alleged accomplice to the bombings killed in the initial confrontation with police, this left the younger brother the only person who could possibly shed any light on the bombings. It was imperative that he be taken alive to be sure there were no other devices still left to go off, to name any other possible co-conspirators, and so forth. Of course, that is assuming that the suspect is indeed one of the actual bombers, as authorities claim.

Both the father and mother of the suspected bombers claim that their sons are innocent. In what is believed to be his last Facebook message, Dzhokhar Tsarnaev tells his father that he was set up and did not do what he is being accused of. 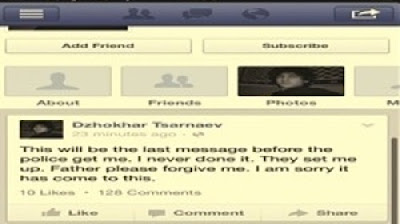 Of course, it is not unusual for a suspect to claim they are innocent, nor is it unusual for a suspect’s parents to defend them. But there have been numerous irregularities in this case from the start, and it seems possible that the brothers may have indeed been set up as patsies. Such a claim sounds like lunatic-fringe conspiracy-theory perhaps, but this possibility has even led a New Hampshire state legislator to make the provocative claim that the Federal government is responsible for the bombings.

It is not known what evidence the government has to show that the brothers were responsible for the bombings. There have been no images or video released of them actually planting the bombs. It is also not known what led to their initial confrontation with police, or what evidence there is that they killed the MIT officer. It doesn’t seem likely that a pair of terrorists on the run would be hanging around a college campus causing a disturbance or trying to attract attention to themselves.

Why Were Bombers At MIT?

It was initially reported that they had tried to rob a 7-11 store, but that was not true, so we still don’t know what the nature of the disturbance actually was that might have led them to kill a police officer. We also don’t know what ever became of a third suspect, or why this man was arrested and then stripped naked before being paraded in front of cameras and loaded into a police car.

Whether or not the brothers actually committed the double-bombing, or whether they killed the MIT police officer is probably something that will be debated for many years to come. If there was indeed a conspiracy, and a plot by factions within our own government, then there would be a clear motivation to kill the patsies who were set up to take the blame for the terrorism.

If they were truly guilty, then as we already mentioned, there was a very real need to take the suspect alive for questioning. It hardly seems reasonable for the police to risk killing the suspect, who as we see now was not even armed. Even if he had been armed, the police should have made every effort, even at the risk of their own lives, to take the suspect alive to glean intelligence necessary for the greater public safety concerns. That is of course, unless the FBI already knew all the answers, which would then lead us back to the notion that they were at least fully aware of the plot, if not directly involved. .

Of course, there is a third line of reasoning which could also be applied here. Plain old-fashioned revenge. It is not at all unreasonable to suspect that the police might have been willing to commit murder themselves in order to get revenge not only on a terrorist, but against a young man who they believed had just killed one of their own. This sort of  “cowboy” mentality is all to prevalent among police today, and it might have even been something counted on by inside conspirators, if it was indeed a government plot as some claim. In this manner, the police could be made to do the bidding of the plotters but in total ignorance. This scenario is an excellent example of why police must be held to the highest ethical standards, rather than routinely excused for criminal behavior.

Knowing now that the suspect was not armed it is almost inexcusable that the police opened fire on him both from a moral standpoint, and of course because killing him might have actually put the public in greater danger. Again, it doesn’t seem likely that his wounds were from the initial confrontation with police in which his brother was killed. It also does not appear that the suspect was wounded inside the boat. We might tend to make excuses for jittery police who were, perhaps, assuming that the suspect was armed. But this reasoning collapses when we look at the photographic evidence. Frighteningly, that evidence appears to show that the suspect was shot after he climbed out of the boat and surrendered.

This first image shows Dzhokhar Tsarnaev in the hospital. You will notice what appears to be powder burns on his face, which would be consistent with being shot at very close range. Much like if he had put a gun in his mouth, and fired, trying to kill himself. This would also be consistent with reports that he has a bullet wound exiting out the back of his neck. This is impossible though, since he was not armed. 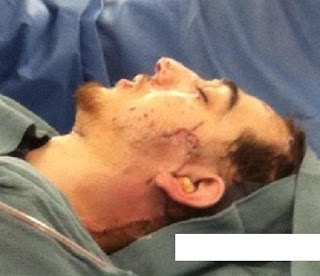 So we know that his wounds were certainly inflicted by police. If those wounds came during the initial confrontation when his brother was killed, if they were in fact exchanging gunfire with police as was reported, then the police were certainly justified to return fire. As we already pointed out though, it’s unlikely that he survived the 20 or so hours without medical care for those very serious wounds. So now the question is when, exactly, did police shoot him?

As you can see in this photo, there was no blood visible at the scene when the suspect was still inside of the boat. 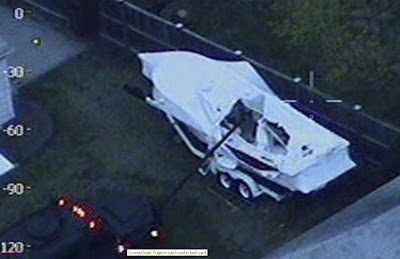 In this photo however, blood is clearly visible on the wheel shroud of the trailer. This means that the blood is not from an earlier wound that might have leaked when the suspect first climbed into the boat to hide. This means that it could only have been left there after the suspect climbed out of the boat. Why would police shoot him after he had surrendered? 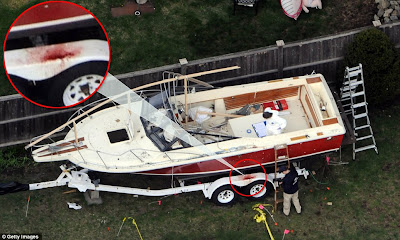 We can see that there is no blood inside of the boat, which would indicate earlier wounds or that he was shot before he surrendered. Looking more closely at the blood that does appear in the image, the observation becomes even more chilling. There is a distinct spray pattern further supporting that the wound was inflicted there. We also see that the blood is sprayed across the top of the wheel shroud, but not the side, except for where it dribbled over a little bit from pooling on top. This means that he was, more than likely, up against that wheel shroud when he was shot. Going by the height of the investigator in the image, the pattern of the blood, the wound to the suspect, a very disturbing image now appears. It looks as if Dzhokhar Tsarnaev may have been on his knees, with his back against the wheels, that someone put a gun in his mouth and shot him, execution style.