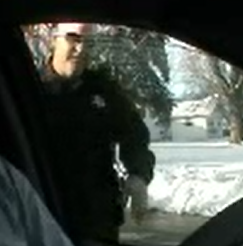 I would first like to point out that I am a licensed P.I. in Wisconsin, Illinois & Michigan.

I worked a case in Appleton, WI, where earlier in the day I obtained nearly 2 hours of film of my claimant clearly committing insurance fraud. Near the end of my surveillance, officer Tooley was dispatched to my location because of a suspicious vehicle complaint. This is when the video begins.

After this incident…an anonymous complaint was filed against me with the WI Department of Regulation and Licensing from a Appleton, WI zip code stating how uncooperative I was with law enforcement and how my behavior was unbecoming of a private investigator. Funny how officer Tooley is there compromising the integrity of my investigation by blowing my cover after I ALREADY notified them of my whereabouts, vehicle description and the times I would be there, as a COURTESY to the Appleton PD. This is the appreciation I get for ACTUALLY CATCHING CRIMINALS! The response I gave to the DRL for this anonymous complaint must have satisfied the legal team and the complaint is now closed. What a joke to begin with!

I spoke to the shift LT. after this interaction on 12-21-2012 in which the supervisor said he drew his gun on subjects during suspicious vehicle calls. Good to know Appleton PD has supervisors that set good examples for subordinates.

I’m there actually providing a service. What service is provided to the Appleton residents by police harassment and intimidation…Officer Tooley?

Funny how nearly every interaction I have at work with the police is after I catch someone committing fraud. Protect & Serve? No! Harass & Intimidate!