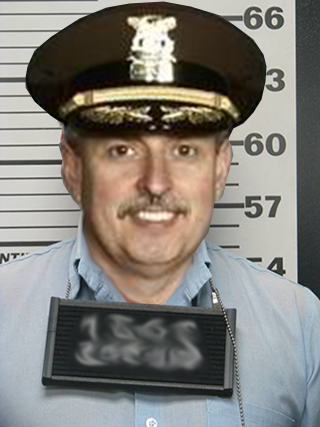 This article was submitted by Theodore Visner via CopBlock.org’s ‘submit‘ page.

My wife and I (Theodore Visner and Kathy Smith) bought a home from Shelly Sweet on land contract, a sheriff department employee, that changed her mind after we had been in the home for seven months making all payments as agreed. Although we were paying Sweet every month on the purchase of the property, she had not been paying the underlying mortgage and the home fell into foreclosure. On a weekend Sweet knew that we would be out of town, she offered the contents of our home to her friends and coworkers at the Isabella County Sheriff’s Department claiming we had abandoned the home and many took her up on her free offer deal and took over $55,000 dollars worth of our personal property. When we discovered this on Monday September 27, 2010 we called the same police and they kept us out of our home and assisted in it’s continued looting. We had NOT been evicted nor had we abandoned the property and the woman had convinced friends and coworkers that we had never paid her, were trashing the house and had forced her into foreclosure none of which were true.

My wife and I were able to get the house back after a full day of effort to discover that 95% of it’s contents had been stolen. The sheriff deputy (Steinert) came to our home three times that day and only assisted his coworker while the under-sheriff, sheriff and PA refused to help us after they recognized the totality of the situation…(that being, 6+ coworkers of Sweet coming into our home and receiving stolen property-theft). On deputy Steinert’s third visit to our home, he arrested Visner for misuse of 911. The county then investigated my crime for almost four months and while I moved my family out of Isabella County for their safety, I could not move with them because my indefinitely delayed arraignment still loomed over my head.

We lost our home and 95% of it’s contents to the Sheriff Department and the sheriff department and the prosecutors office ignores our complaints and refuses to investigate their own and their friends. Over two and a half years have now passed with law enforcement officials doing nothing except covering for one another.

The theft of all of our property sucks but the underlying crime was the conspiracy to deprive my family’s constitutional rights, a federal crime during the commission of which, I was kidnapped (arrested) by deputy Steinert on the bullshit charge of misusing 911. Violation of Title 18 U.S.C. §§ 241 and 242 is a federal felony crime where the offenders could be sentenced to death if killing or kidnapping occur.

Please help my family get some press on this! Local media is in bed with our county and has only lied about the situation by claiming we had been evicted when we had NOT.