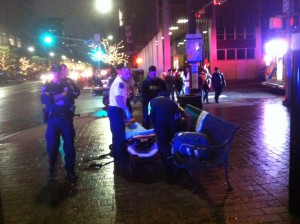 On February 10, 2013, I was taking photographs of an accident scene on a public street in Downtown Austin (5th and Congress). I was standing in a designated area for bystanders, approximately 25-50 feet away, minding my own business, when Officer Gary Shaw (Badge # 3540) approached me. He told me that what he thought I was doing was rude and requested that I stop photographing. When I refused, he informed me that there was an incapacitated woman with her genitalia exposed and that taking photographs of her was illegal, or words to that effect. I informed him that as long I wasn’t interfering, anything can be filmed on a public street because there was no expectation of privacy. I could film anyone or any anything without consent, and that was a first amendment guarantee. All of the sudden, this rogue officer told me I was under arrest for disobeying a lawful order. My recording device was confiscated.

Unequivocally, Officer Shaw had trashed my first and fourth amendment rights. I was taken to jail, booked, strip-searched, threatened by guards, and refused access to a judge over a class C misdemeanor, an offense only punishable by fine.

I received a copy of the officer’s report, and was astonished to find out that he actually admitted his own wrongdoing. He specifically wrote, “I approached the male and told him that what I thought he was doing was rude and requested him to stop photographing.” That’s a key statement, because it is not probable cause to arrest someone for being rude. He also wrote in his report that it was “illegal to take photographs.” My immediate thought was this officer is a nut who doesn’t understand civil rights.

I filed a complaint with the Office of Police Monitor. Mr. Louis Gonzalez, a representative of the organization, informed me that Internal Affairs department had read my complaint and decided not to investigate. On March 7th, 2013, I was interviewed at the Austin Police Department’s sex crimes unit. They asked for consent to review the photos that I had taken and didn’t find any evidence of this exposed woman Shaw had wrote about in his report. In fact, all they found was a photo of a bunch of cops standing around. The next day, Detective Stanfield called and had informed me that I had been cleared of the wrongdoing alleged in the officer’s report.

Later on, I learned that Detective Mike Summers (badge 3543) filed a supplementary report supporting Officer Shaw’s arrest that he bestowed upon me. I wrote in my OPM complaint that both officers were “lazy malingering malcontents with badges abusing their positional power, and that they should be terminated from APD or reassigned with no contact to the general public.”

Although I was cleared, the prosecutors are still are attempting to prosecute me for something that is simply not a crime. They continue to maliciously prosecute me for exercising my constitutional rights. This whole incident is just surreal. I filed a claim for damages for civil rights violations with the city of Austin law department for 125K. My claim was denied and I was informed by a claims investigator, Ms. Cheryl Major, that the city did not engage in any wrongdoing. What a load of crap. The Austin Police Department wants to enforce the law, but doesn’t want to follow it themselves….