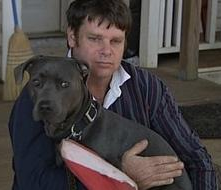 My dog Ford was shot by Andrew Childs, a bad cop. Please read and re-post this story. His actions have caused my dog, as well as my family, much pain. I am in fear that he will shoot and kill a person one day, due to his lack of respect for life. Please help me save the public from him.

A dog shot by a Thomasville Police officer may have to undergo a rare procedure to try to save its leg.

As we first reported earlier this month, Thomasville Police Officer Andrew Childs shot his neighbor’s dog in September and has been placed on probation.

Since that time, Glen Bierman’s dog Ford’s leg has been held together by pins.

Tallahassee veterinarian Doctor Kevin Drygas says he should know by next week if Ford is a candidate for total joint replacement.

“Which would be a very unique procedure not very commonly performed in veterinary medicine,” said Dr. Drygas. “But at this point, it may be Ford’s only chance at having normal range of motion,” he said.

“I have a fundraising thing I’m doing on gofundme.com,” said Bierman. “It’s under Ford’s new leg and we’re trying to raise money,” he said.

Thomasville, GA – A local police officer who shot his neighbor’s dog has been placed on probation.

Glen Bierman’s dog Ford was shot in the leg and may lose it.

He says it will enhance Child’s effectiveness as a member of the department and help rebuild his relationship with the community.

Thomasville’s police chief is expected to decide what action to take against Officer Andrew Childs.

The dog Childs admits to shooting survived, but may lose a leg.

On only three legs, the one and a half year old pit weimaraner mix can still hop on the platform at the front of the bike.

But Bierman has stopped taking Ford on rides because of his bad leg.

How did it happen?

Bierman says he was working in the woods near his Cairo home September 23rd.

“I heard these gunshots and I heard one shot, then I heard the second shot, then the dog just went crazy screaming. It was just a horrible, horrible sound,” said Bierman.

He found Ford limping down a trail bleeding.

Bierman says he confronted his neighbor, Thomasville Police Officer Andrew Childs, who told him he shot Ford because he thought he was a stray.

“His leg is destroyed, good chance of losing it,” said Bierman.

An x-ray of Ford’s leg shows it’s being held together by pins and Bierman must clean the wound every day.

Thomasville Police Lieutenant Kathy Royal sent this letter to Bierman Saturday stating an internal investigation into the shooting has been finished.

She wrote, “I have found there to be sufficient evidence of policy violations as it relates to your complaint.”

The file has been turned over to Thomasville’s police chief for review and possible disciplinary action.

“He’s a danger to people,” said Bierman. “Someone that endangers the public like that I don’t think should be working for the public,” he said.

Assistant Thomasville Police Chief Troy Rich tells us the chief will make a decision within a week about Officer Childs, who is still working.