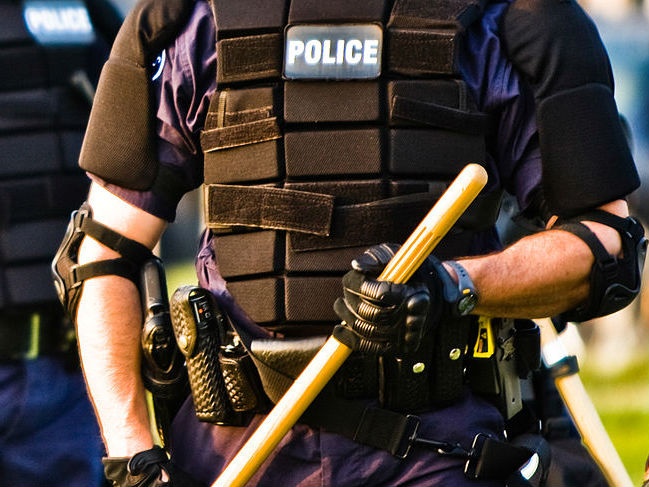 In most aspects of life, respect must be earned. People are judged and judge others based on merits, achievement, and specific qualities.

Strangely, when it comes to police, a uniform and a shiny badge erase all other considerations. If it wears a uniform and a badge, it must be obeyed. It matters not that he or she may have used excessive force, was wrongfully harassing a citizen, or murdered someone.

Rules to do not apply to police. This is obvious from the countless instances documented here on Copblock.org in which police believe themselves exempt from laws that they regularly, and fervently punish and fine ordinary citizens for. A recent post in which Adam called the police department and asked that they enforce parking violations against law-breaking police officers exemplifies this well. The police department’s response was, “is this a joke?”

It shouldn’t be a joke, but attitudes of unwarranted deference for law enforcement have become such that people think you’re kidding when you actually have the gall to believe police should abide by the laws they swear to uphold.

This attitude is also apparent from several posts in response to a San Jose Mercury News article that has since been removed. The article documented horrendous use of violence by police in unjustified circumstances. The article described instances where people were harassed by police and were arrested, where their only charge was that of resisting arrest – meaning that there was no reason to arrest them, but when they resisted their wrongful arrest, they somehow became criminals.

One commenter sarcastically stated, “The police used force when offenders were resisting arrest? I guess they should have said pretty, pretty please to get compliance.” Certainly, asking pretty please won’t get an officer anywhere if he’s trying to arrest someone.  But how about the bold and radical proposition that police shouldn’t go around arresting people for no reason? This commenter essentially believes that it matters not why a person is being arrested; as long as a police officer is doing it, it’s acceptable and justified.

Another commenter said, “Those of you not from California, This story is just another in a long list published by all the police-haters out here. There is such an extreme lack of respect for law enforcement out here it is ridiculous. Can’t do anything without being scrutinized to death over it.”

Again, the demand for blind respect. After reading an entire page about people who were randomly attacked by police and charged only with the vague and nebulous charge of “resisting arrest,” this commentator’s main concern is that there was an extreme “lack of respect” for law enforcement.

As to the bit about not being able to do anything without being scrutinized to death, I’d say that this is precisely how it should be. Police have a monopoly. They have guaranteed access to funds through forced taxes. They have guns. They are permitted to routinely break laws that ordinary citizens are fined and jailed for. They are paid for by taxpayers and are there (allegedly) to protect taxpayers. They absolutely should be scrutinized to death over every detail.

These attitudes are not limited to the general public, but pervade throughout our justice system. Recently, a defense attorney was ordered by a judge to apologize to a police officer witness for implying the officer was untruthful. While the whole point of trial is to discredit the other side’s witnesses, apparently, cops are supreme beings, more deserving of respect and authority than the rest of us peons. This judge felt implying a cop is not a credible witness was an offense by which a lawyer should be humiliated.

Although humiliating a lawyer seems minor in the grand scheme of things, the methodology of this judge actually is a frightening manifestation of how citizens are in fact guilty until proven innocent, rather than the other way around. To this judge, an officer’s word is more credible and carries more weight than an ordinary person. As such, a defendant is in effect guilty until he can prove himself innocent.

It seems the system gives police so much automatic respect, that they are indeed treated as better human beings than everyone else. The system assumes they do not lie, do not make mistakes, have no ulterior motives, and are morally superior. This simply cannot be the case, just because they completed a course of training and got a fancy badge and uniform.

If one must believe government should be in charge of police organizations (and I would completely disagree), at the very least, police should be held accountable for their actions. Instead, there is this misguided, blind love for anyone in a uniform in badge regardless of their individual actions. This foolish and juvenile love for police has led to bloated and over-funded police departments, useless “internal investigations,” paid suspension as punishment (i.e. vacation), and systemic abuse of civil liberties.

And if the only retort to all this is some unfounded, generalized claim that every police officer out there is risking his or her life to protect me, this is easily rebutted by  the fact that police departments always emphasize that officer safety comes first, so it appears my safety isn’t the primary concern anyway.  Police work also is not as dangerous as people think.  It’s roughly the 12th most dangerous job in the country, behind logger, fishermen, farmers, construction workers, sanitation workers, pilots, roofers, millers, miners, merchant mariners and powerline installers.

They also make twice as much as many of the people doing the top 12 dangerous jobs because they have the luxury of coercing tax money from the public. And if you’re going to say that it’s because police do important work, I’d say that growing food, building houses, providing energy resources, and sanitation work are far more important than say, writing traffic tickets and busting people for drugs, which is the majority of police work.  Less than half of people who are in state prison are there for actually violent crimes.  About a quarter in federal prison are there for violent crimes.

Finally, a lot of the dangers inherent to police work are because society continues to impose stupid and unfair laws. Yes, there will be accidents and deaths when police dress in all black and kick down people’s doors in the middle of the night for asinine reasons.  Is that such a surprise?

Take the case of Cory Maye – the police wrongly kicked down his door in the middle of the night. All he saw were men with guns, dressed in black charging into his house. He lived in an unsafe neighborhood and feared for the safety of his young daughter. He defended himself, ended up killing the chief of police’s son, and earned himself the death penalty. The fact that Maye was royally screwed by the police is a side point to the obvious fact that yes, police work is going to be more dangerous if police are going to play G.I. Joe in the middle of the night for stupid reasons.

In addition, I did not ask them to protect me.  I was forced to subscribe to this system through taxes. If someone came to your house, did all your yard work and cleaned your house, and forced you to pay them $1,000, chances are, you would not find that acceptable, even though some arguably valuable services were rendered (and this is really a generous analogy, because I’d much rather pay someone $1,000 to do all my chores than pay cops to throw my neighbors in jail for having weed, or ticket them for speeding).

This is not to say that all cops are bad, or that I hate every cop. Simply put, cops are not supreme beings. A badge and a gun are just that -a badge and a gun. They are not better people than the rest of us. They are not infallible. America was founded on principles of meritocracy. Authority and respect must be earned by an individual; being a part of a system does not, or rather should not, automatically confer such status.