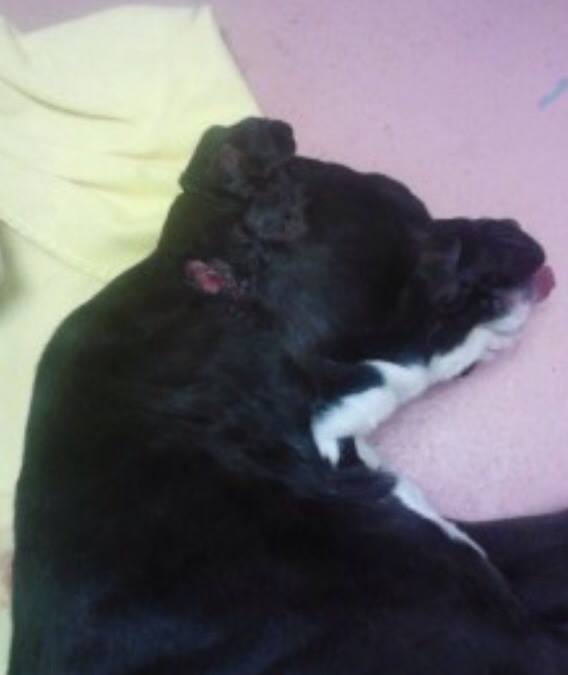 As an Iraq war veteran, Adam Arroyo saw more than his share of bullets flying.

However, Arroyo would have never imagined that he would one day come home, to find his own apartment riddled with bullet holes, and his pet dog Cindy executed, by Buffalo, NY Police officers, after they executed a search warrant.

On the wrong apartment.

That’s exactly what Arroyo found Monday evening when he returned to his Buffalo apartment.

“She’s over here, chained up, and look at all these bullet holes man, look at the blood right there,” Arroyo told Buffalo’s WKBW News.

Buffalo Police left a search warrant in Arroyo’s apartment, which lists the apartment to be searched, as the upper apartment.

Arroyo lives in the upper-rear apartment, which has a completely separate entrance, and the mailbox is clearly marked with his name.

The suspect named in the search warrant is described as a male black, wanted on suspicion of selling crack cocaine..

“For police to wrongfully come into my house and murder my dog, it wasn’t that they felt threatened, no, they murdered my dog,” said Arroyo as his eyes welled up with tears, as he added, “That was my dog, man, that was my dog, they didn’t ave to do that, you know. They didn’t have to do that.

Buffalo, NY Police spokesperson Michael DeGeorge says the department’s Internal Affairs division has launched an investigation into the case, but also added that police officers believed they had the right address.

Not only does Adam Arroyo, a veteran who served this country, return home to find his best friend shot dead, laying in a pool of blood, but he also will have to pay to have Cindy cremated.

Arroyo also has to pay to repair his own apartment door.

Another disgusting case of trigger-happy cops, executing an innocent family pet, this time after raiding the wrong apartment.

As we ate at a nearby pizza spot, it didn’t take long for me to realize one thing.

Arroyo is a stand up guy.

As we talked he excused himself to take a phone call from his mom, who lives out of state, and is as saddened, and disgusted by what trigger-happy Buffalo cops did to an innocent family pet, as countless others are.

Arroyo showed me his apartment, beginning with the door which is dented with what was most likely some sort of battering ram.

Inside, Arroyo showed me the kitchen wall where 7 holes can be seen from buckshot which Buffalo, NY Police officers fired at Cindy. (see videos above)

Arroyo says police shot Cindy with at least two 9mm rounds, hitting her in the neck and back, and also buckshot from their department issued shotgun, which struck Cindy in her back.

While I was there, Arroyo also showed me the search warrant police left in his apartment, which interestingly, does not have the name of the Judge anywhere on it.

Only an illegible signature which looks more like loops appears above “Buffalo City Court Judge”, something anyone could have signed.