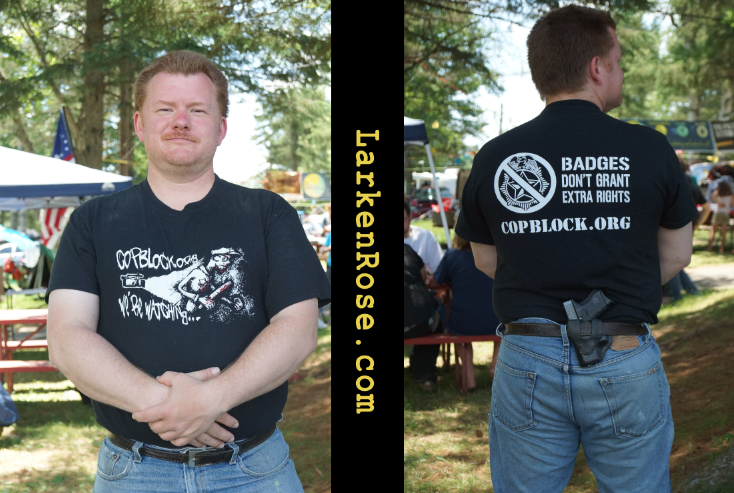 Author, videographer, and included at Wikipedia on the list of “tax protestors”, Larken Rose is perhaps best known to police accountability advocates for his essay and and subsequent video: When You Should Shoot A Cop. As one commenter stated:

Incredible article! I hope people take the time to actually read the full article after their brains shut down after seeing the “shock” title.

On June 20th Jacob Crawford of WeCopwatch.org and Pete Eyre of CopBlock.org caught up with Rose at the Porcupine Freedom Fest, hosted by the Free State Project in the beautiful White Mountains of northern New Hampshire, who shared some of his insight.

While those active with WeCopwatch and CopBlock are strong advocates of non-aggression, this article helps to clarify the world we live by deconstructing paradigms put-forth by those who claim authority and demand your obedience, specifically, by underscoring the fact that each individual – no matter their occupation or any other arbitrary characteristic – has the right to employ self-defense against an aggressor.

If one cannot even have this conversation then it shows just how wide is the gulf between the “protectors” and those they claim to “serve.” Only when it’s realized and incorporated that badges DON’T grant extra rights, will the institutionalized violence cease.

Over the last couple years, When Should You Shoot a Cop? has made the round across the country and world, as well as into several Anti Terror Fusion Centers.

After learning of the memo Copblocker Ademo Freeman called and asked some questions:

The reactionary pushback to the ideas proffered was visible when the mere act of “Liking” the article got two individuals rebuffed by their “party” colleagues, as detailed on the July 27th, 2012 write-up, Politicos Attacked for ‘Liking’ CopBlock.org Post:

South Carolina’s Republican Party is distancing itself from two local party officials who appeared to endorse violence against police officers on Facebook — a position that seemed to take anti-government conservatism too far for South Carolina’s Tea Party-heavy GOP. The party’s top brass called for their resignation from local party committees Monday night. A fascist came up to each front window and knocked. I rolled down my window just a bit, and a gray-haired, veteran fascist informed me that I was not being arrested. That’s nice. . . Out of the blue, the veteran fascist commented about the fact that I’ve posted things on my web site talking about killing cops.

In 2012, the legislation in Indiana mentioned by Larken around the 6-min mark in the video changed course. Instead of “law” existing that claimed that an individual had the right to use defensive force against anyone except those with badges, legislation “approved” self-defense against any aggressor, no matter their place of employment.

IMO, law didn’t need to be written for one to know when they can or cannot defend their life or property. It’s unfortunate people are taught to submit to police without question, yet to stick up to bullies, abusive husbands and any other non government connected persons.

On March 24th, 2012 post, Right to Resist now law in Indiana, cops show how evil they think we are, Edmond Dantes noted that:

Police really think people are that evil, that they will now just play real life Grand Theft Auto and start killing at will. Which begs the question, if people are really that inherently evil, why give so many of them the power of the badge over everyone else? It always appears to me that the worst of the worst are in gangs, whether it be Blood, Crips, or Thin Blue Line.

On a June 12, 2012 post, Indiana legalizes shooting cops, about the reversal of the “legality” of self-defense for Indianans, I asked:

We all want to be safe and secure. The question is, how is that best accomplished? Question those who demand your authority. Think for yourself.

Larken Rose does an excellent job outlining the reality of the situation we today encounter – check out this video interview with Dale Brown to learn about an alternative: