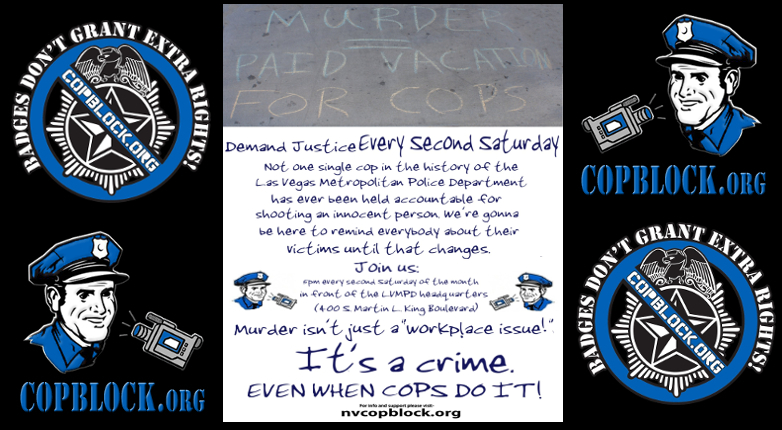 Below is the audio of an interview by Kelly W. Patterson, editor for NVCopBlock.org and member of the Sunset Activist Collective (SunsetActivistCollective.org) on the “Round Table Group” show, which is hosted by Jim Duensing and Sean Gruber regarding a citation the “Sunset 3” received supposedly for graffiti while drawing on a sidewalk with (wait for it) sidewalk chalk, which really is nothing more nor less than an attempt by the LVMPD to keep us from exposing their crimes and in all likelihood will do nothing but backfire and create even more publicity.

On June 8th, while participating in Nevada Cop Block‘s monthly “Second Saturday” protest against police brutality at the headquarters of the Las Vegas Metro Police Department, three members of the Sunset Activist Collective, Kelly, Ballentine, and J.R. Dazo, were accused of doing graffiti while writing tributes to past victims of Metro, including Stanley Gibson; Eric Scott; and Trevon Cole, and bringing attention to the total lack of accountability within Las Vegas area police departments (not one cop has EVER been charged for shooting an unarmed/innocent person in the history of the LVMPD), and in fact throughout the country.

In this interview, Kelly discusses the general lack of any repercussions for local cops that murder people (and animals), the incentive to kill that the policy of rewarding those cops involved in shootings with multi-year paid vacations (something that Jesus Arevalo mentioned as a motivation for wanting to find an opportunity to shoot someone shortly before he did exactly that to Stanley Gibson) while their friends “investigate” those shootings represents, and the details surrounding the Second Saturday incident itself.

The full video from the incident with Metro during Second Saturday is available here: http://www.youtube.com/watch?v=iAj5MKHlPiY

The full broadcast can be found within the archives of the Round Table Group show at: http://www.blogtalkradio.com/freedomizerradio/2013/06/10/the-round-table-group, which is part of the Freedomizer Radio Network – http://www.freedomizerradio.com/.

Both are also embedded below.