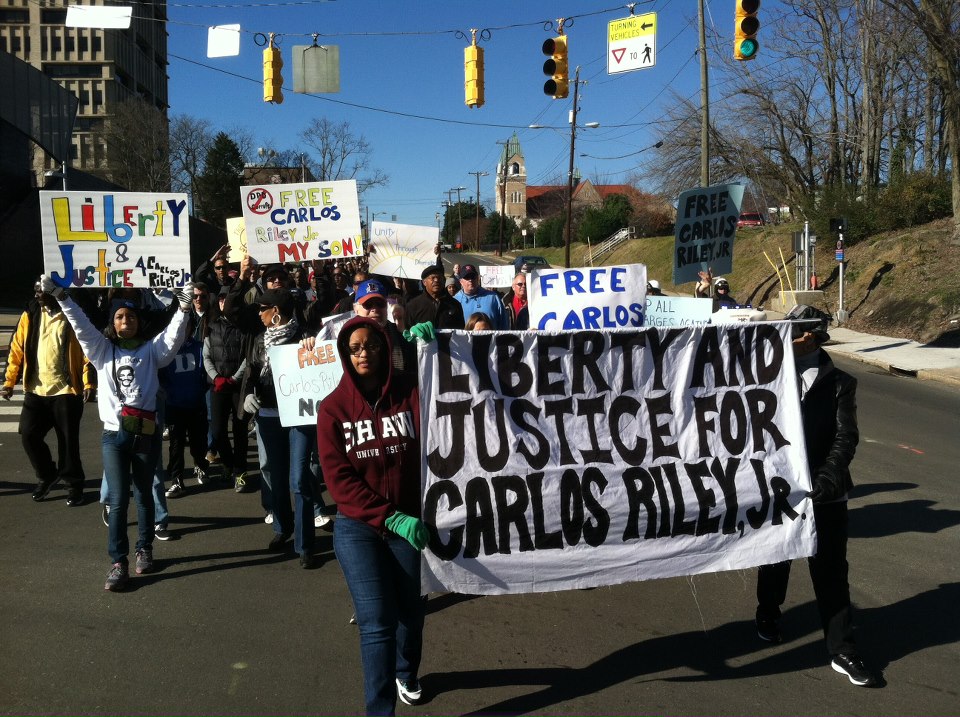 On December 18th 2012, Carlos Riley Jr. was dropping off his girlfriend around 10am when he stopped to speak with an acquaintance. Shortly after, Durham police officer Kelly A. Stewart pulled behind him driving an unmarked police vehicle, wearing plain clothing. As Carlos Riley drove off, Officer Stewart followed Riley, turned his lights on and pulled him over. Carlos stopped immediately, turned the car off and left his seat belt on. Officer Stewart then approached the vehicle, accusing Carlos of smoking marijuana. There was none. Officer Stewart was unable to find one thing that was illegal in Carlos’ vehicle. Frustrated, Officer Stewart then began yelling obscenities and cursing. Riley provided his license, ignored the bait and waited for further instruction. Without any form of justification, Officer Stewart punched Carlos in the face. Riley’s attempt to defend himself was then interpreted as validation for Stewart to exert full force. Stewart entered the vehicle, choked and continued punching Riley. Officer Stewart then threatened to kill the young man and began to draw his gun.

Fearing for his life and barely breathing, Carlos struggled to free himself. Entangled and overanxious, Stewart fired his weapon, shooting himself in the right leg. Well aware of the recent cases of Chavis Carter, Trayvon Martin and Oscar Grant – Carlos batted the gun out of Officer Stewart’s hand. He then assisted Stewart out of the vehicle and fled to protect himself. Riley knew that once backup arrived they were guaranteed to shoot first and ask later.

Hours after, Carlos received word that the Durham Police Department had seized control of his grandmother’s home – wreaking havoc on neighbors and surrounding residents. Black men between the ages of 15-65 were stopped, frisked and temporarily detained. Helicopters and SWAT units terrorized women and children. Several apartments were ransacked by local law enforcement. Residents who had no idea what was even going on were held hostage and placed on lock-down in their own community. Those in custody during the search for Carlos could vividly overhear the dispatch call to “bring him down” and “shoot to kill.”

Carlos Riley Jr. voluntarily turned himself in with the assistance of his father, Carlos Riley Sr. Two escorts assisted Carlos Jr. to prevent officers from exerting any further brutality. Shortly after, LaDarius Riley and Dustin Portee were also placed under arrest. Though neither of the escorts were present at the scene of the initial stop, they were arrested and charged with “accessory after the fact.” Portee is presently being harassed by the ATF (Bureau of Alcohol, Tobacco, Firearms and Explosives). Particular members of the Riley Family have now been targeted by city police officers and the local sheriff’s department. Despite requests from the Riley family, medical records and forensics results have remained sealed. Meanwhile, 21-year old Carlos Riley Jr. has remained incarcerated on charges of assaulting a law enforcement officer, robbery with a dangerous weapon and possession of a firearm by a convicted felon. The Durham Police Department has yet to release a valid report or formal statement.

Fact is, without some form of legal justification, Officer Stewart should never have stopped Carlos. Recent reports suggest racial profiling seems to be a widespread practice in Durham, N.C. It does not help when officers aren’t properly trained in conflict resolution. They are also not disciplined when in violation of citizen’s basic rights. Durham police officer, Bryan Schnee would still be on the force today if it weren’t for organizers and weekly protests. Just two months prior to the Stewart shooting, Officer Schnee brutally assaulted a 25 year old black woman, punching her multiple times in the face. Stephanie Nickerson, a local student and former Navy veteran was asking to see a search warrant before officers randomly trampled through her friend’s apartment. She was brutally beaten, while additional officers watched from nearby. Both cases involved the Durham Police Department’s misuse of force against young people of color.

In Durham, black suspects are nine times more likely than white suspects to be incarcerated for criminal conduct – the highest racial disparity among any of North Carolina’s 100 counties. Black motorists are more than 200% more likely to be searched by law enforcement as a result of routine traffic stops (Attorney, Scott Holmes, 2012. “End Racial Profiling in Durham Now”). There is no debate. Local residents are well aware that such patterns are caused by systematic discrimination.

Activists and supporters are not only demanding justice, they’re actively seeking an independent community investigation. They are also demanding that all charges be dropped against Carlos Riley Jr. and the two young men falsely charged with “accessory after the fact.” Community members are now in an uproar as public protests are beginning to sprout on college campuses and at the headquarters of the Durham Police Department.

Police shootings in the United States typically involve culturally incompetent white men violating the safety of black youth. Not in this case. Durham police officer Kelly A. Stewart is an African American male and fairly young. Unfortunately, black officers generally have to prove themselves. They too subscribe to the same practices of institutional racism as white police officers. Racial profiling becomes a part of the job – an occupational requirement, particularly for patrol officers. Unbeknownst to the public, a patrol officer’s number of arrests has a direct effect on promotions and pay raises. Sounds like a complete recipe for injustice.

Believe it or not

Some critics have questioned whether Officer Stewart actually shot himself. Many have expressed their doubt of how a well-trained police officer could make this type of careless mistake. In the case of Alan Blueford, it is well documented through ballistics reports that Oakland Police officer Miguel Masso did in fact shoot himself in the foot. Though mainstream media reported that high school senior, Alan Blueford died in a “gun battle” with Officer Masso, over a dozen witnesses testified that Blueford was unarmed and that Officer Masso shot himself and then Blueford. When NFL wide receiver, Plaxico Burress shot himself in the thigh in 2008 he was automatically guilty and served prison time for it. When a police officer makes the same mistake, it can’t possibly be true.

Supporters of Stewart’s misuse of force have tried to demonize Carlos, exaggerating and over-emphasizing his past. Organizers are well aware that Carlos was on probation at the time for petty drug possession. That’s no reason to assault or pull a gun out on a citizen who was cooperating. That’s no reason to end a young man’s life. Carlos Jr. had 10 days until his probation would have legally been lifted. He was a good son and dedicated companion. He was loved and respected by former teachers. Carlos Riley Jr. was also scheduled to appear for a job interview the following day. If not for his struggle to survive, Carlos Jr. would probably be dead right now.

Some say the role of the police department is to protect and serve. How unfortunate that for Black, Brown and poor people the only thing they’re served are vast portions of injustice, brutality and misconduct. In Detroit, Michigan, Aiyana Stanley-Jones was 7 years old when she was killed – shot to death by police officers on a “reality show.” Somehow, the recorded video was never found.

Police cover-ups always paint rogue officers as the victim. These national smear campaigns that mask brutality are merely a reflection of the U.S Justice System. The more average citizens become change agents against police terror, the more cover that we can pull back. The more voices we raise, the more lives of black youth that we can save in the future. Join us as we take a stand against police brutality and excessive force. Join us in the struggle for justice for Carlos Riley Jr. Connect with the movement at www.carlosrileyjr.weebly.com or via email at car121812@gmail.com. Sign the Liberty Petition for Carlos Riley Jr. at www.change.org. Join us on Twitter @Justiceforcrj and on Facebook at Liberty and Justice for Carlos Riley Jr.

Durham-based activist, Lamont Lilly is a contributing editor with the Triangle Free Press, Human Rights Delegate with Witness for Peace and organizer with Workers World Party.