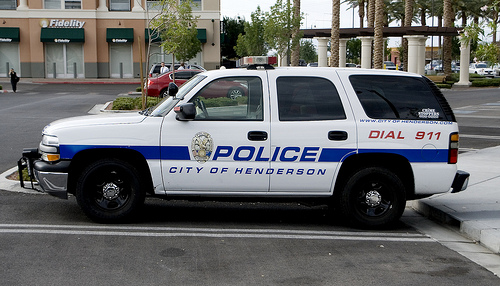 Submitter Ernie Menard writes, “I just read on Marc Randazza’s blog that Henderson cops wanted to use a person’s house as a location from which to surveil an adjacent property. The homeowner refused entry so the police forcibly entered and arrested the homeowner.”

In the case, Anthony Mitchell and his family sued the City of Henderson and its Police Chief Jutta Chambers, Officers Garret Poiner, Ronald Feola, Ramona Walls, Angela Walker, and Christopher Worley, and City of North Las Vegas and its Police Chief Joseph Chronister, in Federal Court. The allegations stem from a domestic violence investigation, in which Mitchell alleges the Henderson police wanted him to let them use his house to gain a “tactical advantage” over the subject of their investigation.

At 10:45 a.m., Defendant OFFICER CHRISTOPHER WORLEY (HPD) contacted Plaintiff ANTHONY MITCHELL via his telephone. WORLEY told Plaintiff that police needed to occupy his home in order to gain a “tactical advantage” against the occupant of the neighboring house. ANTHONY MITCHELL told the officer that he did not want to become involved and that he did not want police to enter his residence. Although WORLEY continued to insist that Plaintiff should leave his residence, Plaintiff clearly explained that he did not intend to leave his home or to allow police to occupy his home. WORLEY then ended the phone call. (Complaint at Para 18)

Then, it gets really hinkey.

So what happened next? Allegedly the cops came to the house, beat on the door, and when Mitchell did not open up, they bashed the door down with a battering ram. They aimed their guns at him, screamed at him, shot him with “pepperball” rounds, searched the house, moved his furniture, and set up a lookout point in the house, and restrained him.