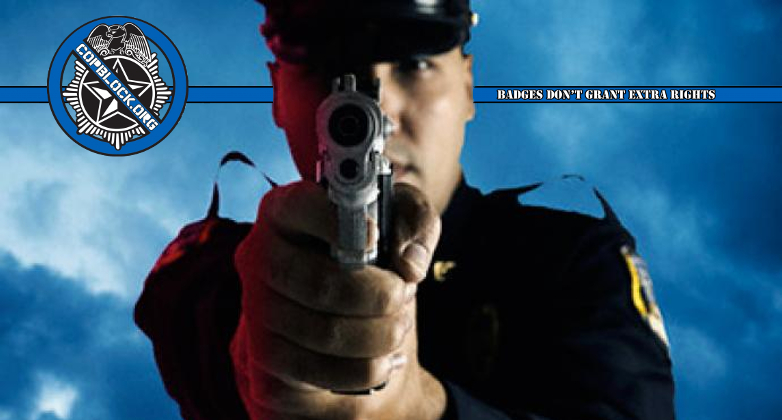 The following post was shared with the CopBlock Network by “Ali” via the CopBlock.org Submission Page.

This is from my own experience in Harrisonville, Missouri (64701).

On my way home from work around eleven at night, I pulled onto an exit ramp and saw flashing lights behind me. Being sixteen at the time, (this was no more than a few months ago), I had no idea what to do and was freaking out because I had no idea what I had done wrong. I drove about a minute down the highway looking for a safe place to pull over because there were several semi trucks pulling out of a weighing station to my right, making it difficult for me to pull over to the side of the road safely. During this minute long duration, I was driving 40 miles per hour in a 70 mile per hour zone to let him know that I had intentions of stopping. This was no high speed pursuit.

I pulled off onto another exit ramp and pulled into a well lit gas station directly off the right side of the road. My parents always told me to pull over to a well-lit public place if this were to ever happen in the middle of the night. I turned my car off, turned my overhead light on, rolled down the window, and was about to retrieve my license and my insurance information from my purse and glove compartment when I heard a sheriff screaming at me to open my door from the outside and to exit the vehicle with my hands behind my head. I did so and realized that he was standing behind his open car door with a loaded gun pointed directly at my head, and he had called two other cruisers for back up. At this point, I was scared to death. Keep in mind that I was sixteen, in a Pizza Hut uniform, and I am 5’2” tall and 120 pounds – not intimidating whatsoever. He had me place my hands on my car, and marched over to me and began to interrogate me with questions –where I was going, why I didn’t stop, why I was resisting police procedure. I explained to him that I had never been pulled over before, being a young girl, and it being 11 PM and completely dark, I felt I had the right to pull over to a place where I felt safe.

After he took my information, he asked if I was hiding anything in the vehicle and if he could check it out. I know now that I could have told him hell no, but I was uneducated about my rights at the time. He dumped all of my belongings out of my purse, emptied my make-up bag, staining my passenger-side seat, emptied a bottle of ibuprofen, broke two CD cases, threw everything that was in my backpack into my back seat, and then asked me if I knew why I was pulled over. No, obviously I didn’t, but I knew this wasn’t standard procedure for being pulled over for petty reasons. He then told me that my license plate light was burnt out and it was “no big deal” and laughed about it.

I’m sorry sheriff, but I don’t think getting a gun pointed at your head for a faulty license plate light is necessary when all I wished was to pull over to a public area where I felt safe. I think your actions justified any young woman doing so in the middle of the night.