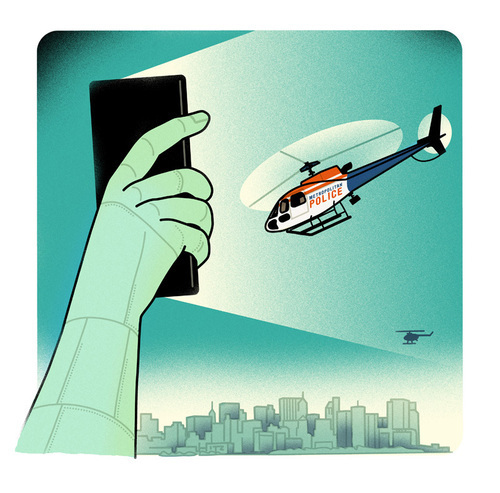 Anyone who has had a confrontation or other adversarial contact with police understands the frustration in dealing with this power imbalance. First, any refusal to cooperate completely with police orders (whether legal or not) can lead to an arrest or worse. Second, if there is ever a disagreement over the facts of such a confrontation, Courts will typically take the word of police officers over the word of a citizen/arrestee. Third, police agencies have complete control over the storage of recording equipment (such as in-car video) used in prosecutions and other legal proceeding.

In many cases where a criminal defendant claims that the police violated their constitutional rights, the in-car recordings of the arrest are destroyed (“per internal policies”) before a copy can be requested.

However, the spread of smartphones and other technology has armed citizens with a valuable tool to address this power imbalance. All citizens should be aware of their right to document interactions with law enforcement. In addition, anyone who is concerned about police abuses should have the basic technological know-how to create and preserve such a recording.

The Right to Record may be especially valuable in the context of a traffic stop where police often run a ‘warrant check’ against the stopped vehicle’s license plate number. Although this typically causes the citizen an excruciating delay in waiting for the officer to approach, it will provide ample time for the citizen to enable his or her device for recording if they choose.

For years, the legality of recording police conduct was unclear and varied from state to state. Several states had even passed laws that banned the practice altogether. Indeed, many websites and blogs still contain outdated and misleading information on the Right to Record. Fortunately, recent legal developments have clearly defined certain rights in this area.

First, several federal courts and the U.S. Department of Justice have affirmed that citizens have a First Amendment right to openly record police officers performing their duties in public. Any law prohibiting this conduct is therefore unconstitutional. Only the U.S. Supreme Court can overturn this Right to Record and the current Supreme Court appears reluctant to do so.[ref]After a Federal Appeals Court last year overturned an Illinois law prohibiting audio recordings of police, the state of Illinois appealed to the Supreme Court. The Supreme Court refused to revive the Illinois law by denying further review of the case. However, because the Court did not issue an opinion, this doesn’t necessarily mean the justices endorse the lower court’s ruling.[/ref]

Most of the notable cases dealing with this issue have involved the third parties (typically media) filming or photographing police interactions with other citizens. However, the law is clear that any citizen may openly record their own communications with police.[ref]Note: Citizens are also protected by the Fourth and Fourteenth Amendments from having their recording equipment illegally seized by police under these circumstances and can sue the police for damages under federal law.[/ref]

Unfortunately, it remains unclear whether or not citizens may secretly record law enforcement acting in public. Several courts have explicitly held that individuals do have this right. Further, in a recent court filing (03/04/13), the U.S. Justice Department stated “[i]t is now settled law that the First Amendment protects individuals who photograph or otherwise record officers engaging in police activity in a public place.” This is a broad affirmation of the right to record public police conduct from the highest law enforcement agency in the country and could reasonably be relied on to justify secret police recordings.

To be clear, the current status of the law is as follows:

Most interactions with police are unplanned and uninvited. It is therefore important to understand (and practice) how to properly record video/audio from your smartphone or other device now.

1) Use a Passcode Lock. This is good practical advice for anyone as this protects your information in the event that your smartphone is lost or stolen. For the purposes of this post, if you are arrested, your recording is virtually useless if a cop seizes your phone and deletes your recording. Even if you do not record a police interaction, officers today often will ‘search’ an arrestees phone immediately and without a warrant if a Passcode is not enabled.

2) Always keep at least 500 MB of available storage on your phone. Again this is practical advice for any smartphone user, particularly if you ever need to record video in an emergency situation. An iPhone video uses approximately 80 MB per minute. 500 MB of available storage will therefore allow you to record only 5+ minutes of video before the recording is stopped. By contrast, the same amount of storage will allow more than 10 hours of audio.

3) Some audio recording apps have other additional advantages for this type of situation. For example, the paid app DropVox has the option of recording in the background and of automatically sending recordings to Dropbox (a free app which stores files in the cloud thus preventing easy deletion).

I will use a standard iPhone as an example (though I invite anyone to comment with similar instructions for a Droid or other device). Most people can take photos/video using a standard camera app. But equally important for police recordings is the standard iPhone Voice Memos app that records audio with a single touch. If you are secretly recording a police interaction, an audio recording is preferable for several reasons. Practically speaking, useful video is difficult to obtain undercover, especially at night. Video also takes excessive storage space and prevents your device from going into Auto-Lock and Password Protect mode.

If you are stopped in an automobile and believe that the communication should be recorded, follow these steps. Calmly pull out your iPhone, open the Voice Memos app and hit the record button once. Check to make sure the recording has begun and that you did not double-click the record button. Set the Ring/Silent switch to silent mode (muting your phone will avoid any attention being drawn to your phone in the event of an incoming call or message). If you have pockets, it is recommend that you place your phone in your pocket top down (i.e. with the microphone facing out of the pocket). Although this will slightly impair the sound quality of your recording, it has the important advantage of following you if you are arrested or asked to step outside the vehicle.

If you do not have a pocket, turn the device face down (i.e. hiding the screen) anywhere near you with the microphone facing in your direction.

One should be aware that the standard iPhone app will leave a red pulsing banner message atop the phone display the entire time the device is recording. Fortunately, the iPhone will auto-lock and dim completely while recording (temporarily hiding the message). However, if an officer seizes your phone and hits the Home button, the ‘recording’ message will become visible even in auto-lock mode. This highlights the need to enable the Passcode feature on your phone as an officer will not be able to bypass the code without a warrant.

Important Note: A police officer who discovers you secretly recording them may become hostile and even arrest you simply for the “illegal” recording. If you are confronted with this situation, be polite and explain that you understood that the law permitted such recordings. Do not give an officer your passcode. If you are arrested, politely ask to speak with a lawyer before you discuss the matter any further.

In summary, you have a First Amendment right to openly record police officers performing their duties in public. If you are arrested for openly recording the police or if your camera or other device is seized, you can sue for damages. You may or may not have the right to secretly record police. Because the legality of surreptitious police recordings remains unclear, this practice cannot be recommended without exceptions. Trust your instincts and use your best judgment under the circumstances. If you are arrested, ask to speak with a lawyer and then be quiet.