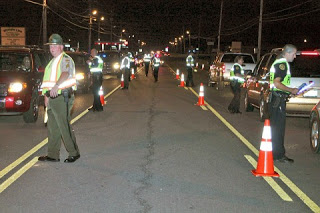 Joe shared the following post from MassPrivateI.blogspot.com with us via CopBlock.org’s ‘submit‘ page.

Tennessee – Members of the Rutherford County (TN) Libertarian Party became concerned about DUI checkpoints occurring in Rutherford County. Members were advised to record their interactions, should they find themselves going through a checkpoint during their routine travels. It was made clear that this would be done so in a way that was non-confrontational and unobtrusive, but still in clear view of law enforcement.”

During the encounter, the Rutherford County deputies invoked “alerts” by a drug-sniffing dog as cause to force Kalbaugh to exit his car while it was searched. Unsurprisingly, nothing was found, since as Reason writers have documented, dogs will alert on pretty much anything their handlers suggest with signals subtle and not so much. Tellingly, before discovering the camera, Deputy Ross conceded that Kalbaugh was “perfectly innocent and he knows his rights” while his colleague admitted, “It wasn’t a very good alert.”

Kalbaugh isn’t giving interviews at the moment, presumably on legal advice, but Axl David, LP of Tennessee Communications Director, tells me that the county party is considering creating a formal organization to continue to make sure that checkpoints continue to be monitored by video cameras. He told me, “We want all law enforcement agencies in Middle Tennessee to know that they will be watched and held accountable should they abuse anyone’s civil liberties.”

To give that organization the ability to fulfill its mission, the county party is in the process of creating an IndieGoGo campaign to help fund dashcams for active members. The link is here for anybody who wants to support the project.

As for the results from such efforts … Even if police departments respond with nothing more than a flurry of announcements about pending investigations, the whole effort will be worthwhile if the A.J. Rosses of the world tune up their conduct to avoid scrutiny of their work history and personal foibles.