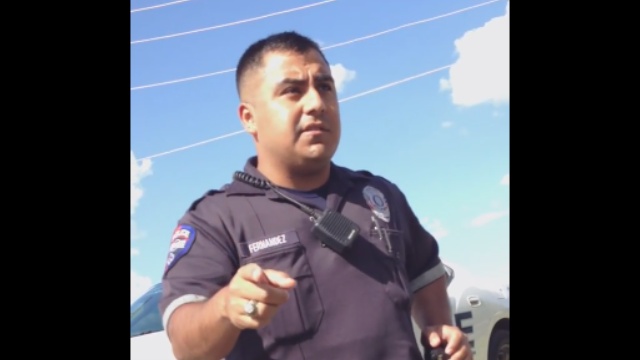 This post was submitted by MikeHansonArchives, via CopBlock.org’s ‘submit‘ page.

Statement from the person being harassed:

On July 9, 2013 at 4:40pm in Buda, TX, I and one other law abiding Texas citizen began to exercise our right to open carry a long gun. At 5:27pm Officer Alex Fernandez with Buda P.D. drove up and began to try to run all over my rights. He never once asked what we were up to. He just jumped out of the car and demanded my ID. A constable showed up as back up. I refused to show ID, and he said I was being detained and going to jail. He went on to tell me that he has been receiving multiple calls (note: later on he said it was only one call; a few times, actually). When I asked for his supervisor, he said, “You will get me.” I proceeded to give officer Fernandez a business card that explains my rights to open carry.

Officer Fernandez read the card, then said he would give me a few seconds to think about it. Meanwhile, he went to his car to get on the radio – to ask what he could do, I was assuming. The constable backed the officer and told me that I had to, by law, show ID; once again, ALL LIES. The officer came back from the car and said I was being detained for suspicious activity. “We don’t have someone walking around with a gun every day,” he said. Officer Fernandez said that I was trying to go to jail because I am an idiot. He then proceeded to return to the car and get on the radio. At the beginning, I had asked for his supervisor in hopes of avoiding all of this. He came back to talk to me after his supervisor told him there was nothing he could do. The officer called me annoying and retarded, and said he knew it was a FUN GAME for me. Off and on, he placed his hands in the ready position for his sidearm. He consistently did not answer my questions. (It is his job to serve, RIGHT?) He said he supports my rights, then ignored me when I asked him how I could exercise my rights.  At the end, I thanked the constable for being polite (even though he showed ignorance for the law, he did like the business card). Throughout the whole encounter with the officer, he never asked me what I was doing, nor did he say one word to the other person next to me with a long gun strapped on their back.